A true UBC pickup.
Black plastic bottom pup. As on Spectrum ST's and such. Neck position. 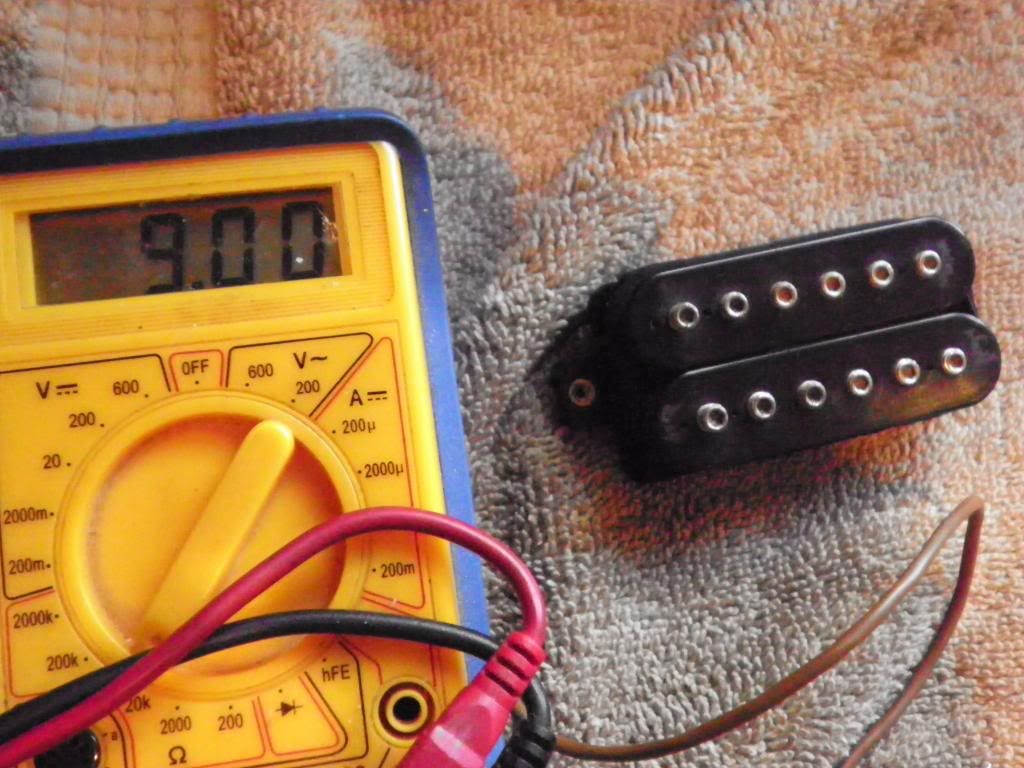 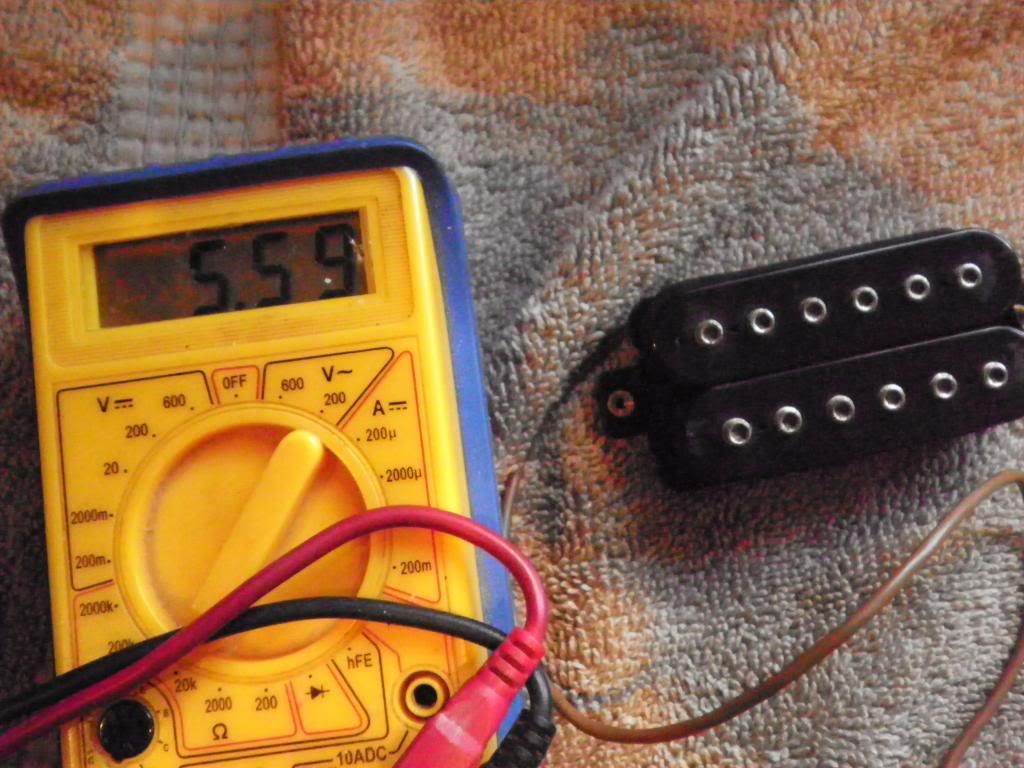 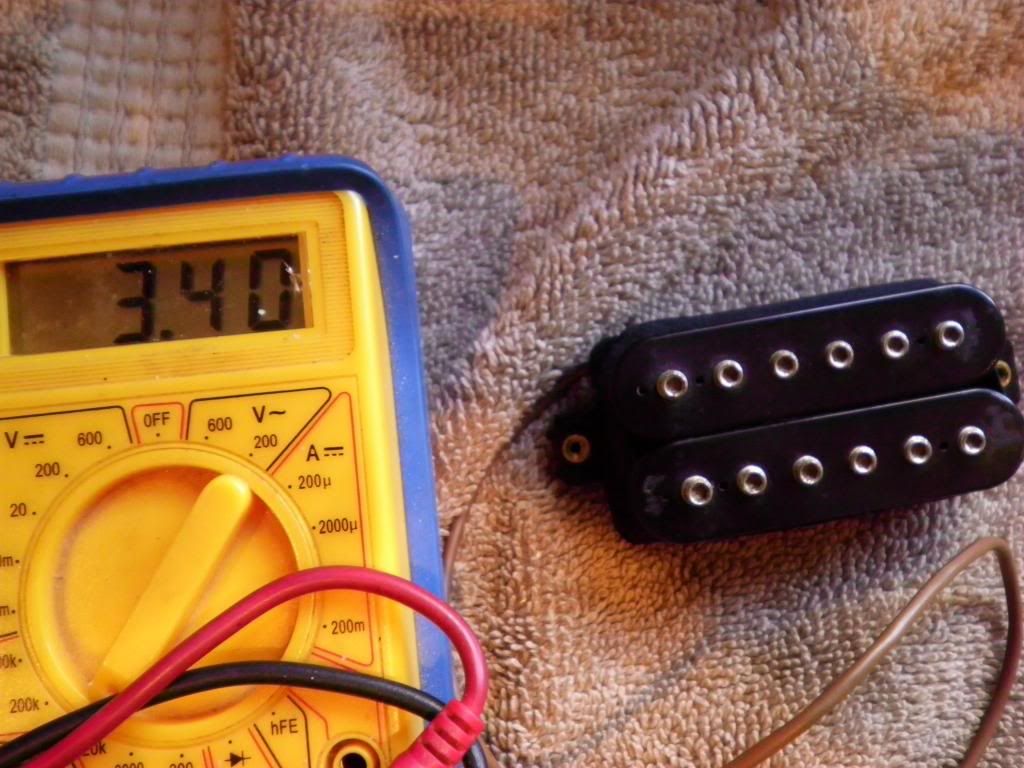 ...rewound one side of the pup.
Will try it out sometime.

It'll be on it's way to you Barry.

Thank you for all your help...

Hey Damian, very nice offer, but only if you're sure you have no use for it eh?

I think it might find its way into the X125 I recently got from Gittarasaurus. The GFS Crunchy Pat is a tad too hot for it.

No problem can always do another IF needed.
Tried it out last night. Sounds fine, no volume drop when tapped.
The tapped sound is a subtle change from full on, just a tad brighter.
Nice at the neck with the Darkstar bridge. 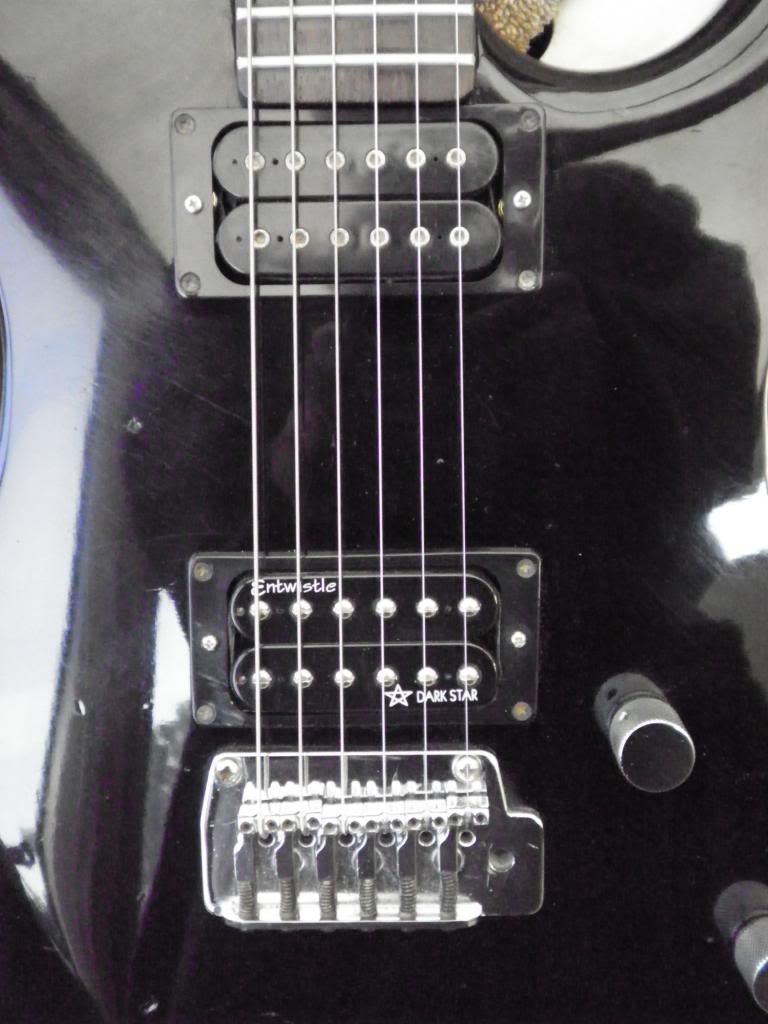 Damian!
You magnificent bugger you!
This pickup is just wot the Dr. ordered!

I brought the X125 in to work today and swapped out the GFS Crunchy Pat that I had installed sometime ago. (Things have been dead here lately)

Man, this "UBC" sounds just great in this guitar, and without the need to add a tone pot. Just the right amount of punch on full, and a very nice clarity on the cut without losing major volume. Just as TP had pictured it I expect.

I wonder why these were never mass produced? They're certainly terrific in the right guitar.

Back story, for them wot cares:
I picked up a pair of cheap MMK45's in dubious condition not long ago. One was fine, the other had a broken coil connection which I couldn't repair. I also happened to have another 45 in similar condition already in a Vantage Entertainar. So...I took the good coils from each to make one good 45 which I used to make the Vantage whole again.

Knowing Damian was a collector and tinkerer, I contacted him to see if he could make use of the 2 bum coils. He said sure, so off they went. Next thing I know he's rewound one of the coils and done this clever little UBC creation. Which he then returned to me!

A BIG Canuck thanks Damian for such a wonderful gesture! This guitar has gone from an interesting collector's novelty to guitar that is actually a damn good player. So, much appreciated!

Just my way of saying "thank you" to Barry, who drove to the other side of town to collect some pickups for me and post them on.
Saved a good few bob on customs and handling charges.

Well, since that last post in July, I have been fiddling with the UBC in this guitar and I am sad to say that it just isn't working out quite as well as I had first hoped.

I hasten to add that it's no fault of the new improved UBC pickup. Damian did a fantastic job on it, and it sounds great.
No, the problem is that this model "Spectrum" is based on American Strat string spacing (much wider), the trem is a standard Strat style.

Add to this the fact that this is really a Neck pup and slightly narrower to begin with and you end up with this (usual apologies for the crap pictures from my old phone camera under fluorescent lights): 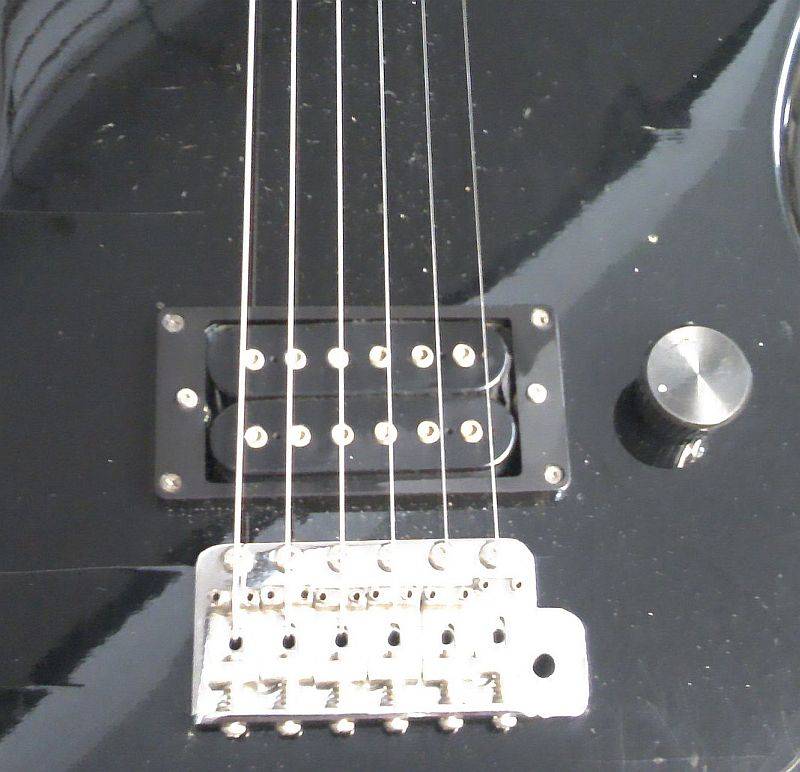 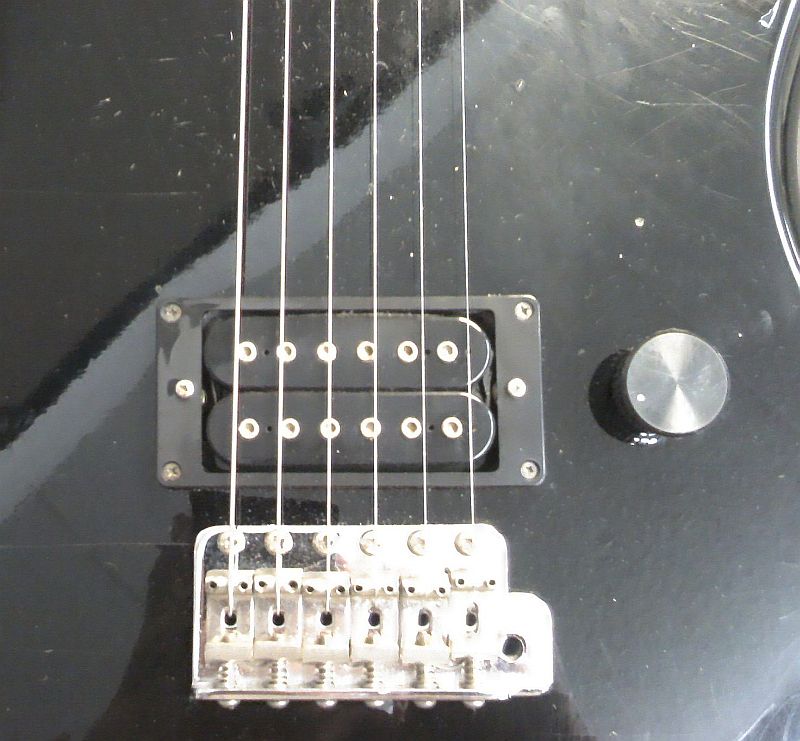 Unfortunately, by the time you get to the treble side of the string pack the high E is so far off the pole it can barely be heard.

No amount of raising the mount or the poles would compensate enough: 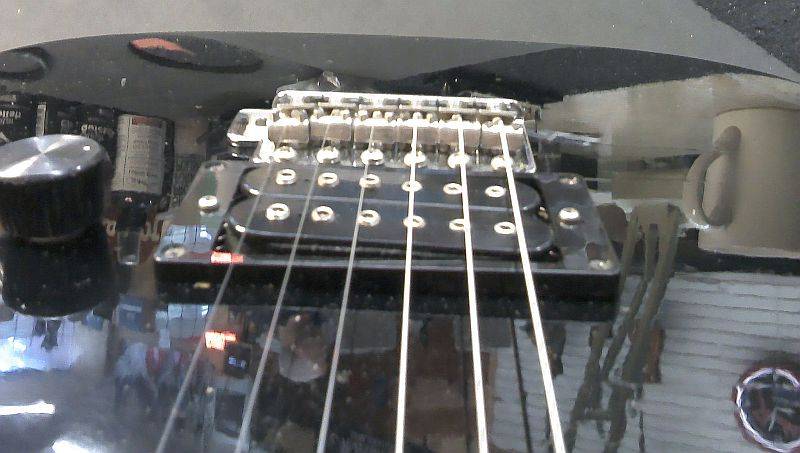 Alas, the only cure was yet another pickup swap. This time using one of a pair of 'no-name' MIK lower output pickups that I had got stuck with in a transaction gone horribly bad some time ago. (you can read that sorry saga starting from this post if you're a masochist).

These too, were Neck pups so the spacing isn't dead on, but it is light years closer than the UBC was: 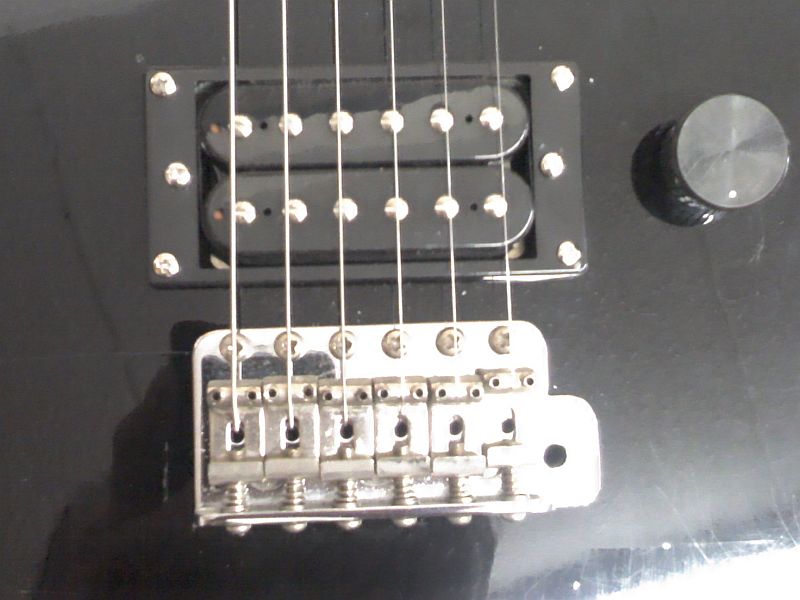 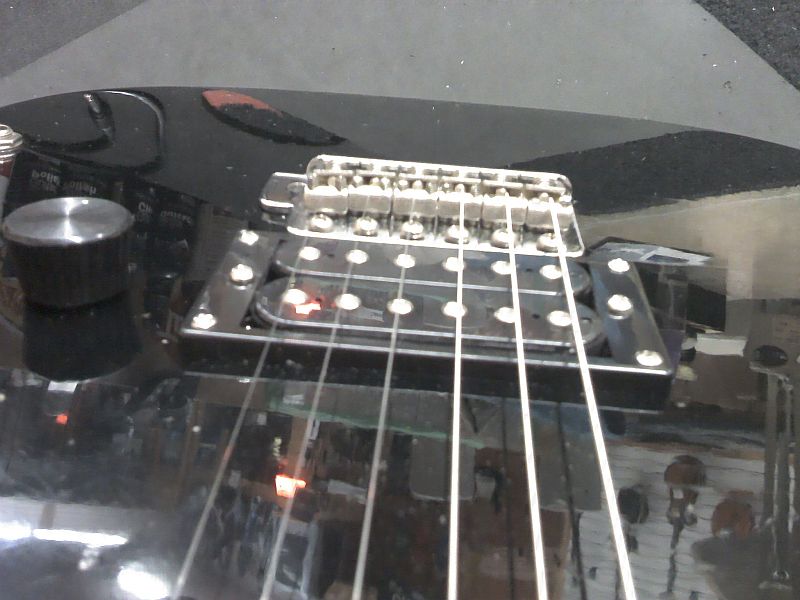 It turns out that this pickup had just the right amount of "omph!" for this guitar without being overpowering, just a tad over 8k. And the coil cut has a pleasant enough tone even at 4k'sh. Remember the guitar has no tone control so the goal was to try and keep at least the outward appearance as stock as possible while managing to deliver enough output to be respectable. So far, so good. I like the tone very much.

And it is much more satisfying to hear all the strings in a chord.

Thanks again Damian. I shall have to find a more suitable home for your creation.
_________________
"A little song. A little dance. A little seltzer down your pants." -Chuckles the Clown

Well, well, well....looks like I may just be the King of the Zombie threads here!

The regulars may recall the tale of my Spectrum X125 which I got from Mike (gittarasaurus) about 6 years ago! (If not, here's the LINK)


I went through several pickup changes but the gist of my dilemma is that I wanted to maintain the original look of the single pickup/single control, but the output was always too harsh and really needed a tone pot to control the treble frequencies.

That would mean adding another control pot which I didn't want to do, and of course I don't have another matching Switchmaster knob anyway.

Lots of folks contributed ideas and I thank them all for that, but nothing really solved my problem in the way I wanted. So the guitar has remained "unfinished" in my mind and a recurring source of irritation.

But now, I discovered what I think may be the ideal solution!
Corsair actually asked the question early on, if a tone control could be added to a push pull pot. The idea was pretty much glossed over and never revisited properly, by me or anyone else.

Quite independently, I came across this schematic which shows that you can indeed wire a push pull pot to be both a Volume on the down position AND a Tone in the up position!

I'm very happy to have found this, I was about to go seriously bonkers with this obsession. I have already wired in a push pull for a coil split so it will be a matter of moving a few wires and adding a cap, et voila!

The only down side is that I give up the single coil option, but no big loss really.
Have a look and see what you think: PDF of the schematic
_________________
"A little song. A little dance. A little seltzer down your pants." -Chuckles the Clown

That's all well and good, but if you've set your tone and need a volume change, you'll lose the tone setting when you push down, no?

Dunno Pete, I haven't got off me lazy arse to try it yet.

I didn't see any discussion about the function of this mod. I assume that if that were the case there would have been objections raised.

Since the cap is constantly in the circuit, at worst, I guess it would default to the cap value?

Barry mate, you're too long in the tooth to have your mellow tainted by a ponderous question

And if you just can't get enough (you poor masochistic sod) see the continuation/completion of this saga in this NEW THREAD
_________________
"A little song. A little dance. A little seltzer down your pants." -Chuckles the Clown

Sgt. Vimes wrote:but if you've set your tone and need a volume change, you'll lose the tone setting when you push down, no?

From my understanding, I don't think altering one will alter the other as they are, for all intents and purposes, separate parts of the circuit, and of the pot....

Quite happy to be educated...

I may yet revisit this project (God help me) and try the tone-on-top push pull wiring.

I wasn't able to find anyone who had actually done this but everyone was an "expert" on why it wouldn't work!

Well now, the Damian UBC is the gift that just keeps on giving!

The regular members will know that I'm a huge Vantage fan and have bunch of them, including a beautiful 1982 Vantage "Entertainar" (sic).
This was a partial restoration project when I got her and it's been a great LP style player ever since.

Except...she's been plagued with MMK45 coil rot. The guitar appeared to have endured some high humidity environment, there was rust on all the screw heads, the stop tail studs were corroded shut, and there was some corrosion on the neck plate when I got it.

I already had one '45 breakdown and manged to cobble together a "new" pickup from another '45 in a similar condition, combining the 2 good coils. Now another coil has stopped working in the neck position and I'm back to where I was.

I looked around in my box of guitar thingies and found Damian's UBC. In it went, and I gotta tell ya, it sounds wonderful!
Fits right in and no one would ever guess it's a custom UBC. She's finally found an appropriate home! 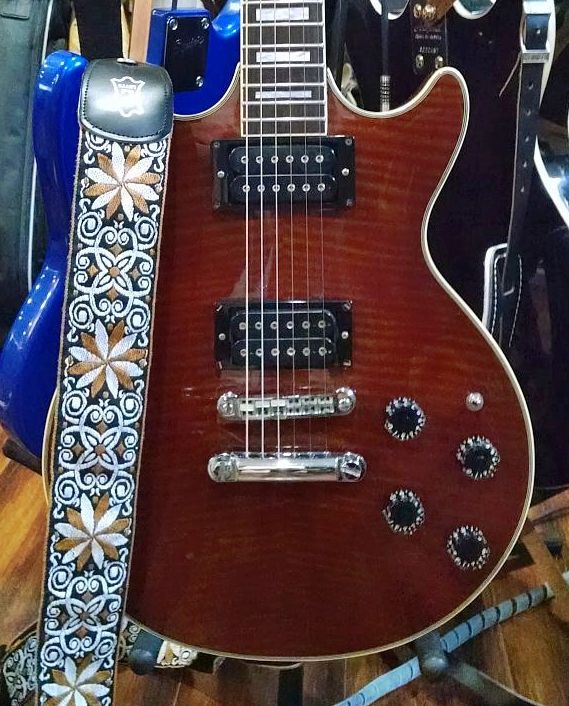 The only fly in my ointment, well, 2 flies actually, have nothing to do with the pup.

Fly #1
I don't know where what's left of my gray matter was at the time but I managed to reverse the pup leads and soldered them to the wrong pots. So the controls are now upside down, the top pot controls the bridge and the bottom the neck!

Fly #2
Somehow the G string got loose when the guitar was being worked on and got pinched against the frets. I didn't notice it until I turned the guitar over and to my horror saw about 8 frets sporting brand new dents! DAMN IT!! The frets had been beautiful until then.

So now the joy of having that great pickup working has been muted by the extra work I've caused myself. DUMB ASS!

Yeah, I've felt badly that I couldn't find anything suitable to plug it into. But this is a perfect match, and sounds great!