It's totally stock.  I've just ordered this for it: 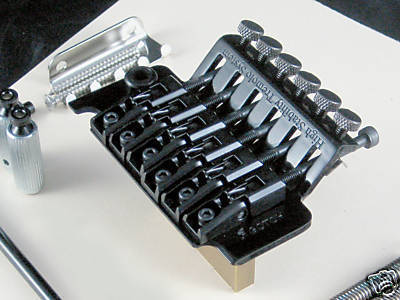 The bridge is a Gotoh 1996T.  If I've done my homework correctly, intonation should not be a problem.  What stinks is that I won't know until it arrives.

It's not like you can borrow one to see if it'll fit or not.  I've also ordered a  brass sustain block upgrade, it's a much thicker block which actually makes a difference in sustain and bottom end.

After the bridge and humbucker, I intend to shave the heel and install an actual locking nut.  That's further down the road, though.

IF I'd paint this Dynasty, what color ideas do you all have?  This will be a rock/metal guitar.

Fake metal burst finish with the metal edging into rust. Well you asked.

i think you need to paint it like this

Whatever colour it's going to be, and I'm partial to slimebursts or bluebursts, it must have either metal flake or pearl in it!!

What about a body sized graphic, à la Phil Collen or George Lynch??

Great ideas men!  Keep them coming.  I've toyed with the idea of painting the bevels a different color than the body.

In the meantime, I've just installed the Jackson J80c.  It's hotter than the MMK45.  I tapped on the pole pieces and I get response so my soldering should be good.

Now just waiting on the Gotoh bridge to arrive.  That will get her playable again, I wonder how big of a difference all this will make?  Any?  We'll see.  I should've recorded a "before" so I could compare it to the "after".

Shave the heel on the treble side only, you'll only have one neck bolt to sort out.

That's if you use 4 seperate screw collars

Westbone wrote:Shave the heel on the treble side only, you'll only have one neck bolt to sort out.

Hmmm... that would keep it stronger too.

So that leaves me a little more comfortable with the idea of shaving my 1985.

gittarasaurus wrote:i think you need to paint it like this
http://www.specialistpaints.com/product.php?p=ice-fx

Oh yeah, this is better.  Funny how much a new trem system changes the overall appearance... 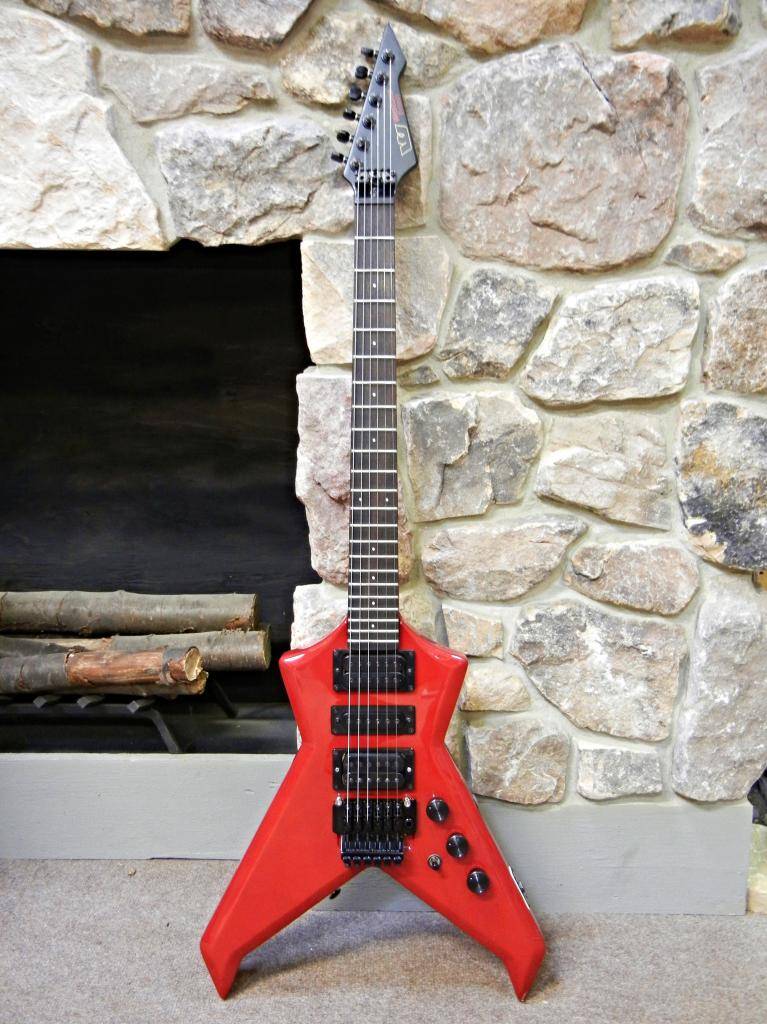 Looks great, much more "modern" for lack of a better term.  The studs/posts are silver right now, scavenged from another guitar, I'll install the black Gotoh studs/posts later.  The Gotoh studs have a locking stud system which has uses larger inserts requiring larger holes, so I'll have a guitar shop install those as I don't have a drill press.

Intonation:  My main concern going into this was intonation, would this expensive Gotoh work allow enough room to intonate properly?  Colt had said that intonation was an issue with the Floyd Rose, so I did my homework on this Gotoh ahead of time.  After installing this Gotoh, I only had time to intonate the low E since that would've been the problem area, and it worked perfect with room to spare.  I was happy.  I'll intonate the other strings tomorrow and update.  But so far, looks like a Gotoh will work fine on a Dynasty or Dimension IV regarding intonation.

Here's how it lines up on the body. Enough room for pull ups a whole step or more, plenty for me. 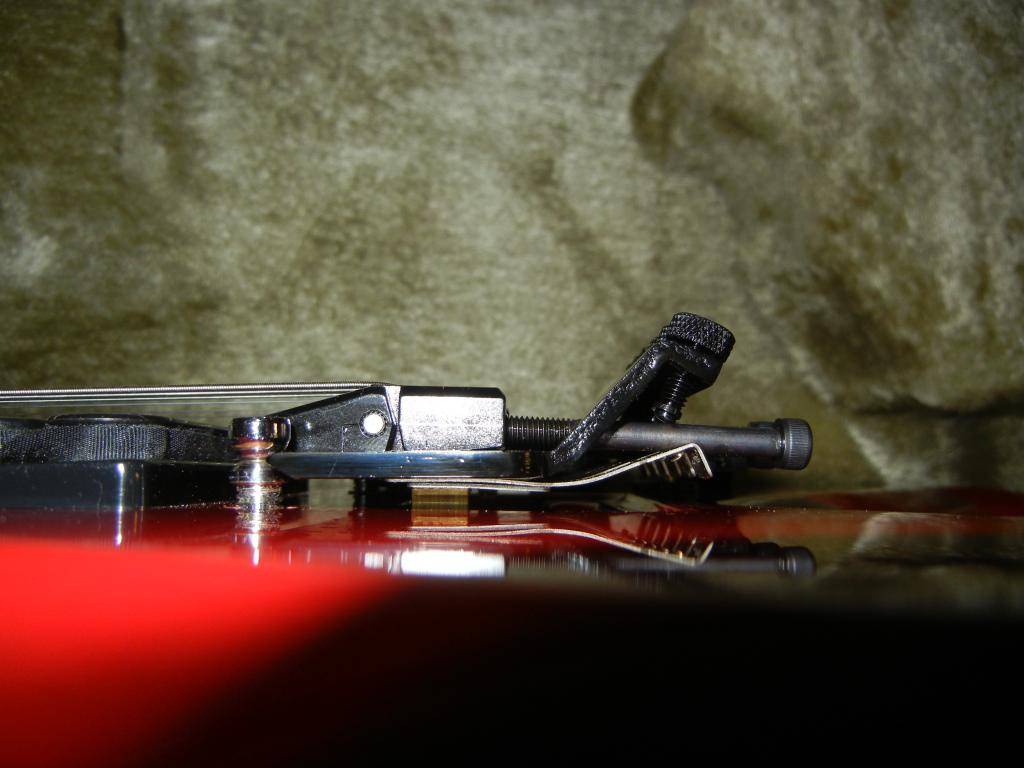 What's odd is that the original Bendmaster has a 45mm sustain block!  The longest conventional that you can buy is 42mm.  Therefore, the strings hit.  I'll need to grind off the Dynasty's cavity corner.  See where the stings hit? 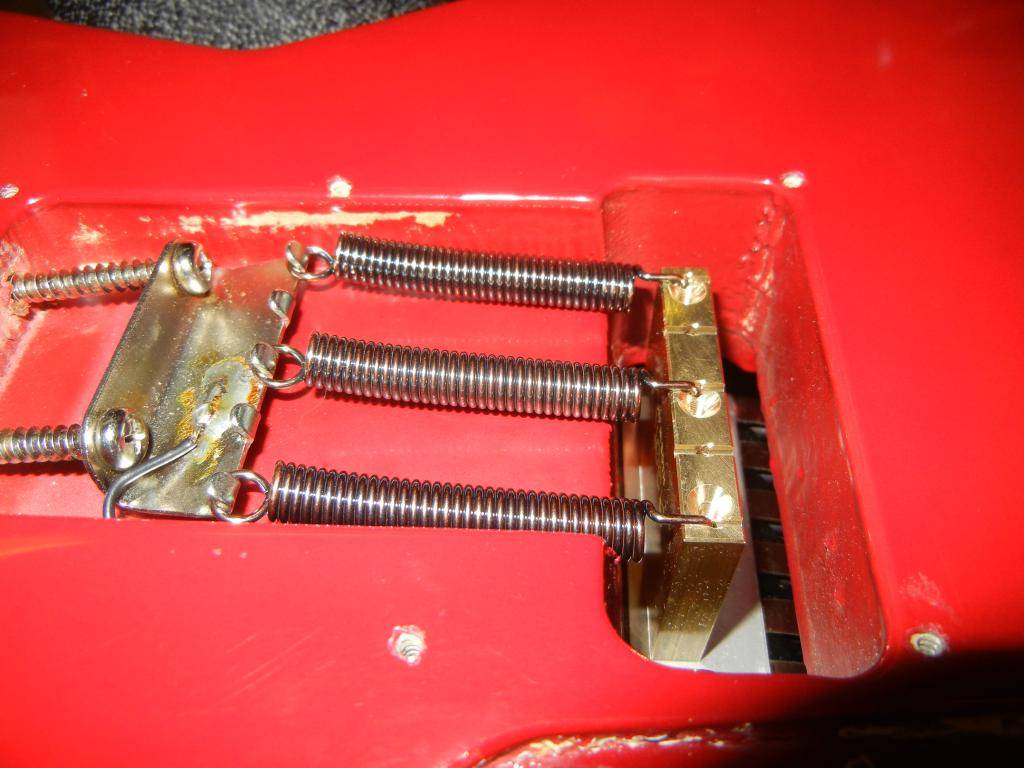 Here it is shaved down, I used a file.  No more spring rubbing!  The Gotoh Floyd works GREAT, the best floyd style I've ever played. 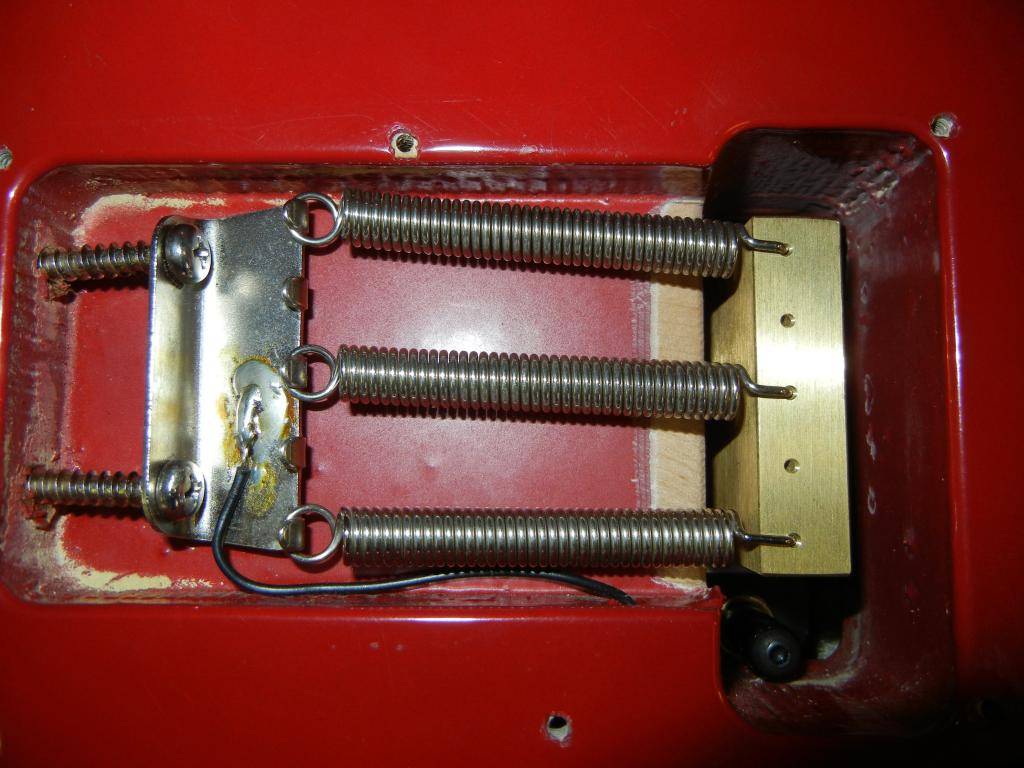 The Jackson J80c humbucker works great.  It's a ceramic magnet so it's more harsh than I'm used to, but it sounds great though.  The string spacing on the J80c is 50mm which is strange, I really need a 53mm (F spaced).  That's why the strings are not centered over the pole pieces.  Not that this causes a whole lot of difference, because it really doesn't in my experience.  I'll center it the best I can in the mean time.  I might change it out in the future, I've only had time to give her a very quick run through to ensure everything works (and it does).

I'll update more as it goes on.

Apparently not.  According to the Jackson/Charvel experts they were all standard spaced in that time.  Wasn't until the 90's that they moved to Trem spacing like we're used to nowadays.  This J80c is a bridge pup, just a standard spaced one.  Even some of the old Jackson bridges were spaced more narrow like this.

Gibson pups used to be  both the same too.

The Gotoh 1996t Floyd Rose style trem will intonate almost perfectly using the factory stud/post holes.  It will be a TINY bit flat on the A string, the others strings will be dead on.  Most tuners wouldn't even show the A string intonation being a tiny hair off, but I have a super accurate strobe tuner so it shows it being a teensy bit flat at the 12th fret.  Although a different Dynasty or Dim IV may show different results as the bridge posts won't be in exactly the same place on every guitar due to manufacturing differences. UPDATE:  After replacing the stock bridge pins and installing new bridge studs (or "posts", whatever you want to call them), the intonation is all better, the intonation is perfect.

I bought a big brass block for the Gotoh (was like $20).  Here's how much bigger it is over stock... 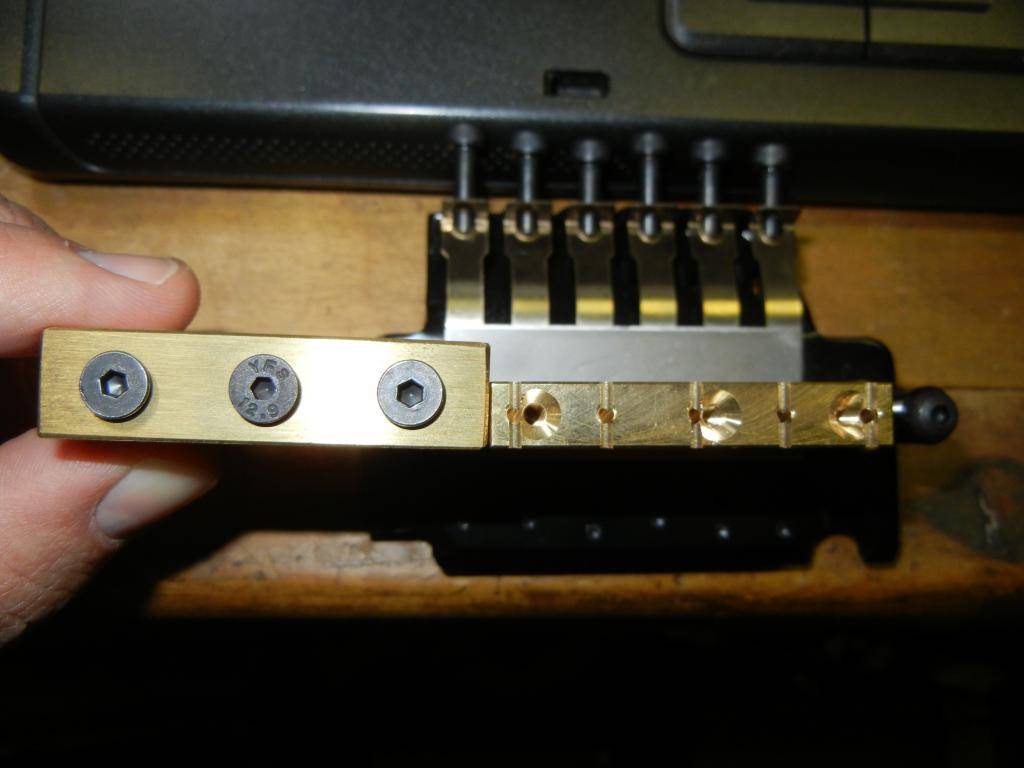 A lot bigger!  This actually makes an audible difference.  It deepens the tone a little, maybe "fills it out" more?  Hard for me to describe, but it makes a difference and it's not just the placebo effect. 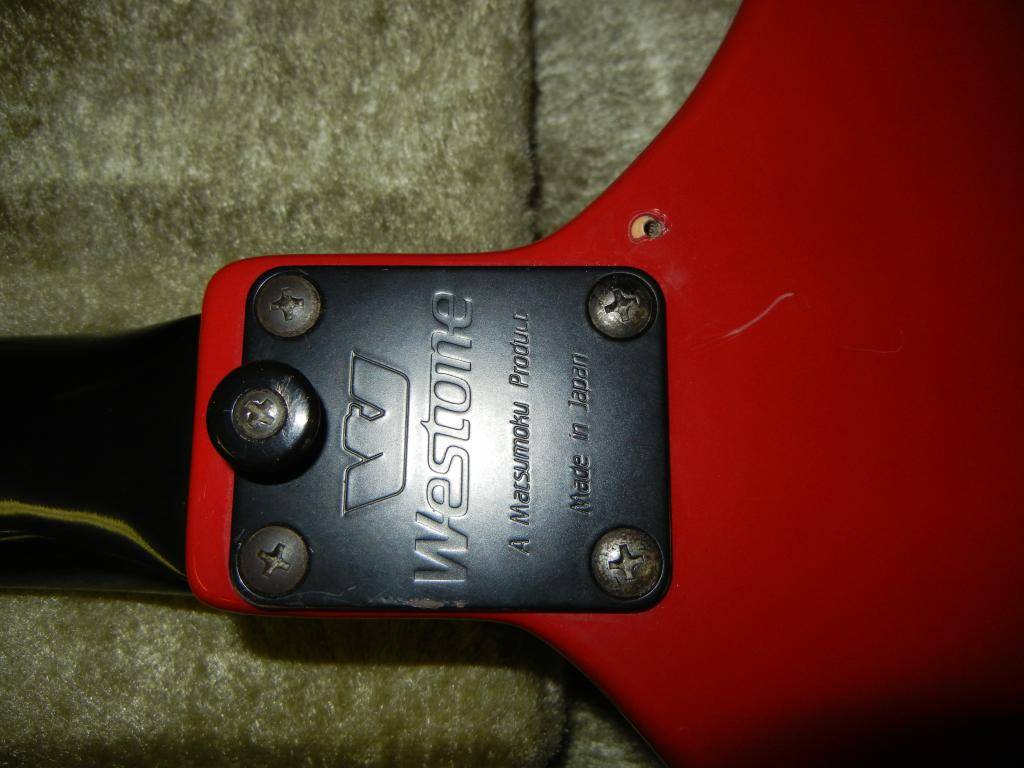 I also put a small piece of black foam between the right side of the bridge pickup and the body to keep it positioned well under the strings.  You can't see it at all, it's under the pickup ring.  This Jackson pup is from the late 80's and is standard spaced, therefore it needs to line up as best as possible.

I'll update as I go on with this thing.

Hey Chad, I'm looking to do a similar bridge upgrade on my Dimension. How snug of a fit is the big brass block in the cavity? Do you find that the increased size of the big block impedes the amount of movement you get out of the tremolo or does it have some room to breathe? It seems like cool upgrade (plus the 42mm block means a little less shaving than the stock 40mm on the Gotoh), but I'll steer clear if it means I won't be able to do monster divebombs.

No routing required, I can dive till the strings are slack so no issues there at all.  The Gotoh is a killer upgrade, you'll love it.

Big brass block is extra but worth it.  There actually was a small difference in sound to my ears.  Enough to justify the purchase?  I don't know, but since you need to buy it to find out... you know what I mean.

Awesome! I just placed my order, thanks so much for the detailed info on the upgrade, it's helped out immensely!

Glad to help, I've had mine this way for a while, still loving it.

I got my Gotoh bridge and ended up ordering the Jackson studs/posts (JT585) recommended in another thread. The Jackson posts are a little too wide for the Bendmaster's anchors and the threads don't match either (Jackson ones have a much tighter threading). I'm not sure if anyone has any other suggestions, I'd prefer to avoid widening the holes.

The Chad wrote: The studs/posts are silver right now, scavenged from another guitar, I'll install the black Gotoh studs/posts later.

You wouldn't happen to know what make/model these were, would you?

I'm surprised to hear that, mine worked perfectly.  The silver studs were from a Greg Bennett guitar, I no longer have the guitar.  I find that there aren't too many different kinds of studs, it's usually fairly easy to find replacements.  Measure your stock studs, see what they measure and let me know.  We'll get you on track.

Just searched through my Ebay purchases, those Jackson posts are certainly what worked and what I used.  They were 3/8" wide.  I know this because I had purchased two sets, one generic set that had the wrong thread and then these Jackson posts which screwed in perfectly.

Another case of different parts used on similar models of Japanese guitars? Measure those stock posts. 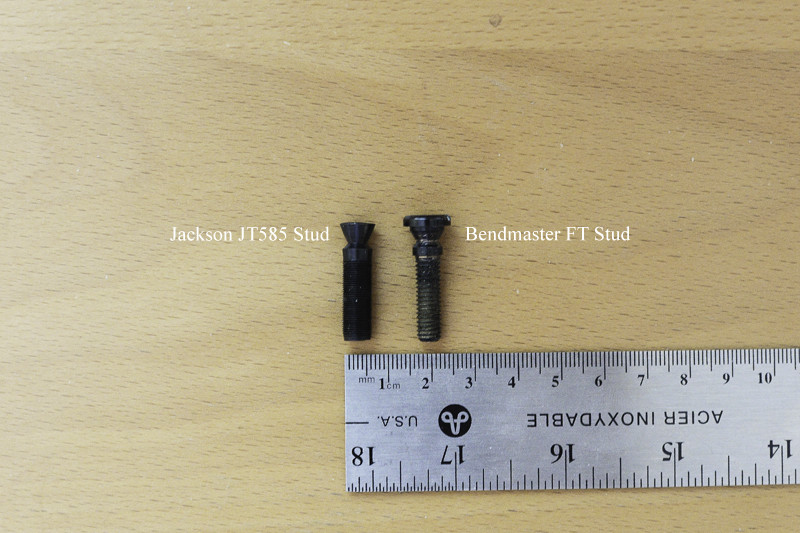 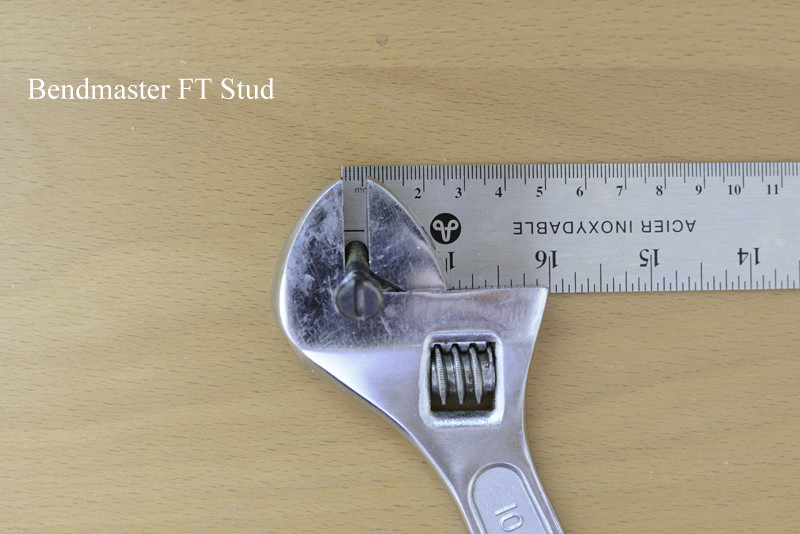 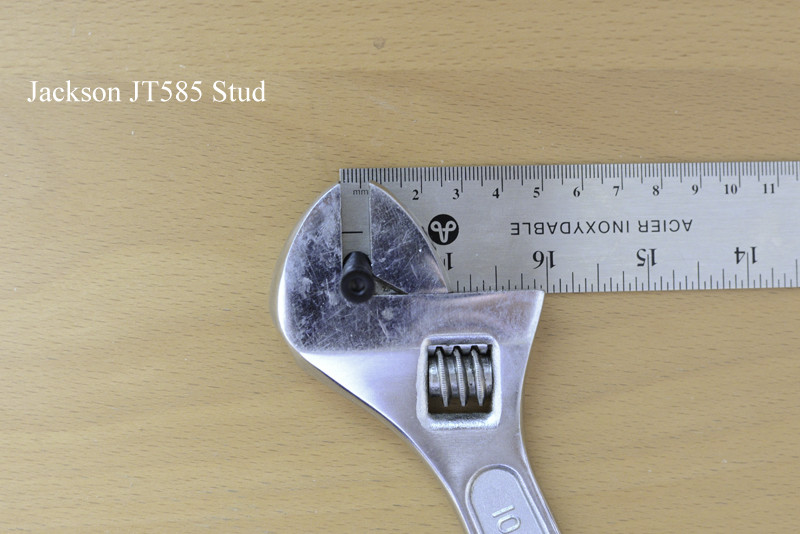 I see, that is different from mine!!!

I wonder if it would be possible to shave down the diameter of the Bendmaster heads since they're what causes the incompatibility with the Gotoh.

You could, it would be a bit of work.

jollevier wrote:I wonder if it would be possible to shave down the diameter of the Bendmaster heads since they're what causes the incompatibility with the Gotoh.

The threads on the Westone are 6mm. Anchor points are 8mm inserts.

These might work, but it would be a crapshoot. 6mm coarse thread sounds right.

Those will do the job, 6mm course thread...

That looks good.  WD is a great place, too.

Hope this fixes you up!  You will love the Gotoh.  Absolute upgrade.

jollevier wrote:I wonder if it would be possible to shave down the diameter of the Bendmaster heads since they're what causes the incompatibility with the Gotoh.

The threads on the Westone are 6mm. Anchor points are 8mm inserts.

I assume the pivot is binding on the posts, yes? Now, that will be hardened steel in there, won't it? If you gring that out a little, won't you wear through the hardening? You certainly won't want the bearing surface to be soft!!

Thats's a great tip about hardening the freshly painted saddles in the oven, Damian!!

You'd just be grinding the bigger cap section of the post.
Not the actual 'waist section' contact point.

Yeah, just the screw head portion of the studs. There's not not enough room for the head because of where the saddles come up next to the knife edge on the Gotoh.

In any case, I'll keep that idea as a last resort. No sense in messing up a perfectly good component of a Bendmaster if someone else can use it. Shane P might have a lead on where I can find some 6mm studs from a local guy, if that falls through, I'll just order the WD Music one.

Take it your in the usa.