Hi all,
I bought my Westone Prestige 150 back around 1983 and the girl in the shop said 'the technician's not here today but bring it back next Tuesday and he'll set it up'.
Yeah, right, That was what, 27 years ago? and I never returned to the shop (excited as I was with my new purchase.) So now, all these years later, I'm actually doing something about setting it up because, you know how it is; I thought it was about time.
Last night I worked on a slight tensioning to the neck, minor adjustments to the intonation and lowering the treble side of the bridge slightly; all of which have made the action that little more comfortable (actually, up till now I reckoned I'd brought a guitar that went out of tune as you moved up and down the fingerboard - oh all those wasted years!)
It's playing very nice but now I have no idea where I stand with the pickup height for individual strings. With no specialist equipment other than the two ears I was provided with at birth, does anybody have any tips for checking that these are correctly set?
I tend to be a rhythm/blues/rock and roll player
Cheers
Stu 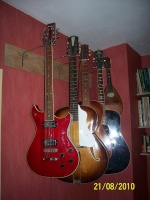 Sorry it's took a while for anyone to reply to your post, I overlooked it.

Anyway, the best tool to use when it comes to pick-up adjustment is your ears (and a screwdriver, obviously!

The basic measurement from the strings to the pole pieces is anywhere from 2-5mm, measured on the high and low E strings while they are held down on the last fret. That is only a ballpark figure though, a neck pick-up will tend to sound louder because the strings moves more towards the 12th fret that they do nearer the bridge. Also the thicker bass strings sound louder than the unwound strings because the magnetic field of the pick-up will "see" more of the string movement.

On my own guitars I usually end up with the bridge pick-up sitting level at 3mm from both E strings (remember, the strings held at the last fret), and the neck pick-up angled 4mm on the high E and 4.5-5mm on the low E to even out the bass, but all this depends on the type of pick-up and output it has.

Remember, these are just my preferences and you just need to trust your ears. If one pick-up is a lot louder than the other, just lower it. If the bass strings overpower the treble strings on a pick-up, angle it to balance the sound. You can also adjust the height of the pole pieces themselves, some people adjust them to match the arc of the fretboard but it's not something I've tried.

Don't be tempted to bring the pick-ups much closer than 2mm because the magnets try to pull the strings out of tune. It will sound like the string is pulsing, this is the magnet grabbing the string as it moves over the poles. Some high output pick-ups have really strong magnets so they should be adjusted further away from the strings. Equally, if the pick-up is too far away, it loses the tone and obviously the volume, and it won't sustain for very long.

Basically, you adjust them till they sound "right", just write down the heights before you start so you can reset it if your not happy with the sound.

These are just my views on the subject, hope this helps (and I hope I haven't waffled on to much!)

Hi stuart. Dan's given you a thorough tutorial on the subject and there's really not much to add, except to reinforce what he's said. The technical points he raises about the proximity of the strings and magnetic poles are the only real cautions because the they will ruin your sound if done poorly.

The only thing I'd recommend is that you pick up and use is a dual scale 6 inch/15 cm steel rule. The first Inch is usually divided into 32nds or you can use the mm on the metric scale, and it's very handy for a variety of measurements particularly on these Japanese machines.

In the final analysis, it's how it sounds to you relative to your playing style and equipment.
_________________
"A little song. A little dance. A little seltzer down your pants." -Chuckles the Clown

I have noticed that the height of he pickups varies from 1mm high from the pickup (Bass E) through to 3mm high (D) then back down to 1mm at G and up to 3mm at treble E. I don't know if this is a general starting point with
these units but I do feel it sounds heavy in midrange (say D) so will take your advice with noting down the starting point in case I get into a lather.

I was expecting to see the pickup height roughly follow the light camber of the bridge and neck but this is quite obviously not the case.

Probably not going to get chance to do this immediately, but as soon as I have, I'll let you know how I got on.

Similar topics
» X2RD setup help
» Bendmaster Setup - or - How great The Chad (and this forum) is!
» spectrum III bridge setup
» Spectrum ST sound, setup, ... questions
» What is your favorite setup for tuning pegs?