I'm thinking of building a new board as my current one only houses 10-12 depending on which ones are employed, some are the mini pedals, some have a large footprint, most are traditional 'boss' size

I wondered what everyone else was rocking to give me some inspiration!  lets have your pics!

Mine are just two Boss BCB-6s, one set up with modulation pedals, and the other with distortions and overdrives and neither of which I am using currently!! There are pics in here already of mine so I won't labour the point, suffice to say that they are a little old-fashioned as modern boards are built to cope with all kinds of stuff, not just the standard Boss-sized stompers, eh! I know my Crowther pedals - a Hot cake and a Prunes and Custard - don't fit on the Boss boards...

Well, I've been tinkering with a couple of mine for a bit (still in trial wiring but functional)

With the use of two stereo processors which can drive 4 amps, virtually quadraphonic. 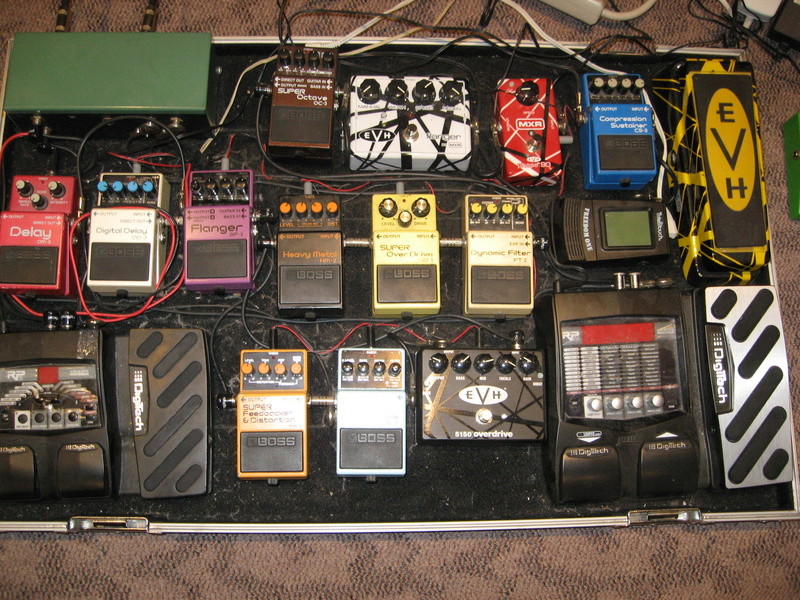 I've since removed the CS-3 (too much hiss) but here's the hook-up: 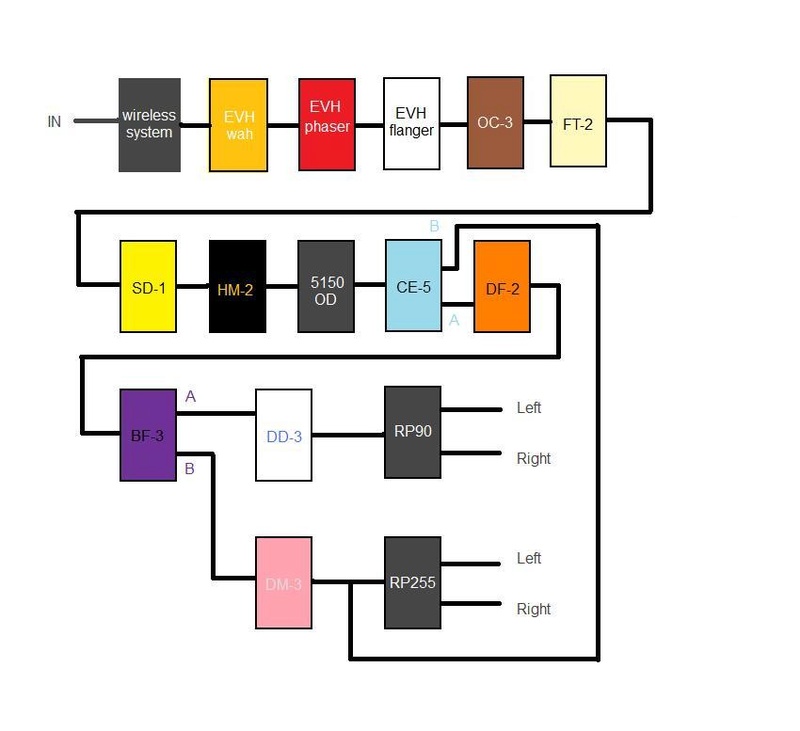 Loads of fun though!

Caused a black-out in sector 3

Looks impressive...but for moi, too much work.
A few levels of overdrive, the occasional chorus, and I'm a happy ol' fart.

The rest is from what's left in me arthritic fingers.  Cheaper that way too.

I think you do need to compress the incoming signal, Steve, just so that everything gets a smooth, steady signal level; I hated the hiss that came with a compressor, too, but persisted until I found a compromise.... and a bloody noise gate!!

Looks pretty impressive, bloke, but - like Barry - a bit complex for this old, slow kiwi!!

I get that this could be a lot of fun just noodling around, but I cannot imagine something like this working comfortably in a live environment.

Even mounting to something more solid, and replacing the longer wiring with smaller jumpers, I would still have the willies about the reliability of the signal chain, never mind trying to hit the right pedal at the right time.

The whole thing is overkill for sure

and definitively not for live performance.
It all started with a single line chain of modulation, drive and distortion. Also having the processors, I wanted to see if it would actually work adding them at the end. That way I can use the built in drum machine of the RP90 and the looper/dubbing of the RP255 in tandem/stereo. It works pretty well and loads of fun.

The EVH Flanger is awesome in the line position but I make full use of the stereo functions of BF-3 and CE-5. I never use compounded effects of those three... way too dizzying.

The EVH OD 5150 is gated and both RP units have their own gates and compressors as well.
Mind you, the rig is not tested at performance volume and don't think I'd want to try

Two processors as stand alone is enough to drive anyone mad with all the possible settings.

Impractical for sure but fun as all heck to try the combinations of single or simultaneous guitars.
Let's face it, I'm no John Petrucci

I see you have a wireless system feeding in to this at the start. What one are you using, is it any good, and what did it cost? I'm thinking about getting one...

The wireless I have is a single channel Intellitouch Freedom One but has worked well for years.
Gives about 30 feet radius and runs about 8hrs on a single AAA bat. Relatively quiet, and minimal Freq loss, reliable and draws about 100mA at the base on standard 9V adapter. Bought it for 70.00 CDN, a while back.