I was noodling around in YouTube and ended up watching some grainy old film of the original Fleetwood Mac band with PG in 1969.

The music was pretty dern gud, despite two major distractions:
1) watching a shirtless Mic Fleetwood drum with his mouth wide open most of the time, and;
2) typical terrible video coverage of the day by director's who insisted on being "artsy" and focus on hands strumming strings, cymbals being hit, closeups of sweaty faces covered in long hair, etc. etc. And of course focusing on everyone but the guy actually playing! *sigh*

However, there were some, uh, fleeting portions showcasing PG hisself. Being the happy owner of a replica "lemon drop" like his I was keen to see the original, even in B&W. That's when I paused the vid and to get a closer look at the legendary pickup installation and I was surprised to see this: 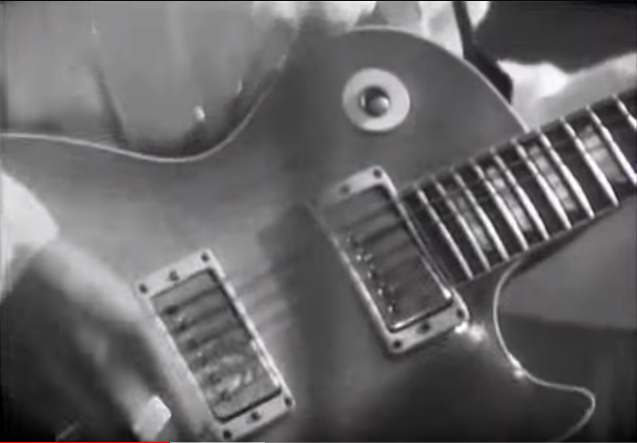 Not only is the neck pup reversed as expected, but he had also severely angled it to raise the treble and lower the bass. That's something I'm used to seeing and doing on a Strat single coil pup but not a 'bucker. Looking again you see the same has been done to the bridge pup.

Curious. I wonder if he was unaware of the messed up geometry and magnet reversal in the neck and was trying to compensate somehow?

The other thing noted in the vid's was that he appears to play mainly on the bridge pup. Also interesting since so much is made of the "Peter Green sound" which allegedly came form that neck pup. But that only has an effect when both pups are on and you get that out-of-phase sound. From what I saw the "sound" was all in Peter Green's fingers. The neck pup had nuffin' to do wif it.

Granted this was only a small sample of tunes and perhaps he does go to the mid position later on in his career. But based on this viewing the PG set up may be overrated, or just wrongly credited for his sound.

Interesting, thanks. That explains why the pups are tilted, but he's still playing only the bridge pup. When does the centre position playing (nasal / out of phase tone) kick in?
_________________
"A little song. A little dance. A little seltzer down your pants." -Chuckles the Clown