What was your first guitar?

What was your first guitar?

I'm curious to know what my fellow Westone fan's first guitars were. Just a quick rundown of the type of guitar, what you thought of it, how it played, if you got a good deal on it (I sure as heck didn't!!) and if you still own it now. Maybe throw in a pic if you got them, that would be cool.

If you have any interesting or funny stories related to your first guitar, feel free to share that too!

My first guitar was an Ibanez Destroyer. It was an '87 or '88 model I think. I convinced my dad to buy it for me when I decided I wanted to learn how to play guitar. I found it at the music store down the street from my house for $400. At the time I thought it was a good deal but of course I knew nothing about guitars then. I just thought it looked cool and I wanted it lol. Once I brought it home I realized frets 21 to 24 were corroded like hell but luckily I had a friend that played guitar (and later taught me how to play) that was able to fix it up for me. Once I started to play it more proficiently I started to realize how nice of an action it had and the Kahler bridge was superb.

Funny story though... fell free to call me an idiot... Just before I bought the guitar I discovered Yngwie Malmsteen and became fascinated with the fact that he used scalloped fretboards on his guitars. I think you know where I'm going with this... About 6 or 7 months after I bought the guitar I decided I was going to try and scallop the fretboard MYSELF! Of course I had no knowledge of that at all and I messed it up beyond repair. The scallops were so deep that the neck was just garbage, so I took it off and sold my guitar, sans neck, to the same friend that taught me how to play. He still has it today with a new Ibanez neck on it and I still go over once in a while to jam with him with my Spectrum III. He even lets me play it sometimes lol. He changed the pickups out, which were not original to begin with and put some EMG 81's in the bridge and neck. That thing SCREAMS now! It really makes me regret screwing it up and getting rid of it.

I loved that guitar and if I knew as much about guitars as I do now I probably would still have it. I got so discouraged when I ruined the neck though that I just wanted to get rid of it and I ended up buying a crappy Squier Stratocaster afterwards that I hated with a passion.

Anyways, that was more long winded than I thought it would be. I'm going to shut my trap now and wait to hear your guy's stories! I look forward to it! 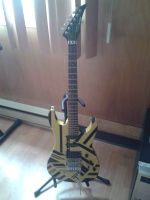 My first electric string was a Samick, bought is new in 1998 I think.  I bought it based on looks, because it looked kinda like my acoustic but cooler.  Used it all over the place for a couple years before I quite playing guitar and it sat in my closet for about 8 years!  It's actually really nice.  Could stand a pickup upgrade however.  You can check it out here... CLICK HERE FOR MY SAMICK

I still have it, hope to pass it down one day.

That is a really cool guitar! The headstock is really odd for an electric, kinda reminds me of a classical guitar I once owned. A buddy of mine had a Samick but it was nothing fancy, just a strat copy and I wasn't a fan of the headstock design on his, but yours... that is just a work of art!

First guitar was a steel string acoustic bought by my parents in 1968.... came with 2 years of lessons and an action you could drive a truck under!!

First electric was a 58 Telecaster which "got the treatment"... custom paint, DiMarzio Fat Strat pickups and I 'm pretty sure I changed the neck as the original was like a baseball bat!

Still looking for one of those 460TS's Chad, great looking guitar...

My first guitar after the embarrassing memory of the tennis racket in the mirror playing along to John lee Hooker and Buddy Guy was a cream Jedson bass, a Columbus les paul copy and then working every hour to pay my folks back, a 1961/62 cherry walnut Gibson SG, £270 in 1977. Sadly sold in the moment to cover a new strat plus and the plane fare to Canada to do some session work..would truly love to play her again....

I'll leave out all the horrid details of my actual "first" guitar at the age of about 9 or 10, bought with good intentions by me mom. Suffice it to say that this "restored" acoustic plank was likely a distant cousin of Corsairs in the action department...and it was painted, um pink...with a paint brush! (oh the horror!) Stop snickering John.

At least it didn't put me off, and I still played along to the radio, trying to figure it all out. There was another no-name acoustic guitar after that from a department store, which was marginally better, and playable, sort of. I learned how to tune the thing and play some real chords.

Then at the tender age of 19, after renting a few guitars and playing with a few other neophytes, I finally bought a real guitar, the one I still have today. My '64 Gibson ES330TD. It's been my faithful companion now for *gasp!* 50 years! Even though I have 30 others, including some outstanding Mats models, she's "still the one that can scratch my itch" (sniff).

For them wot's not seen it already, here it is again: 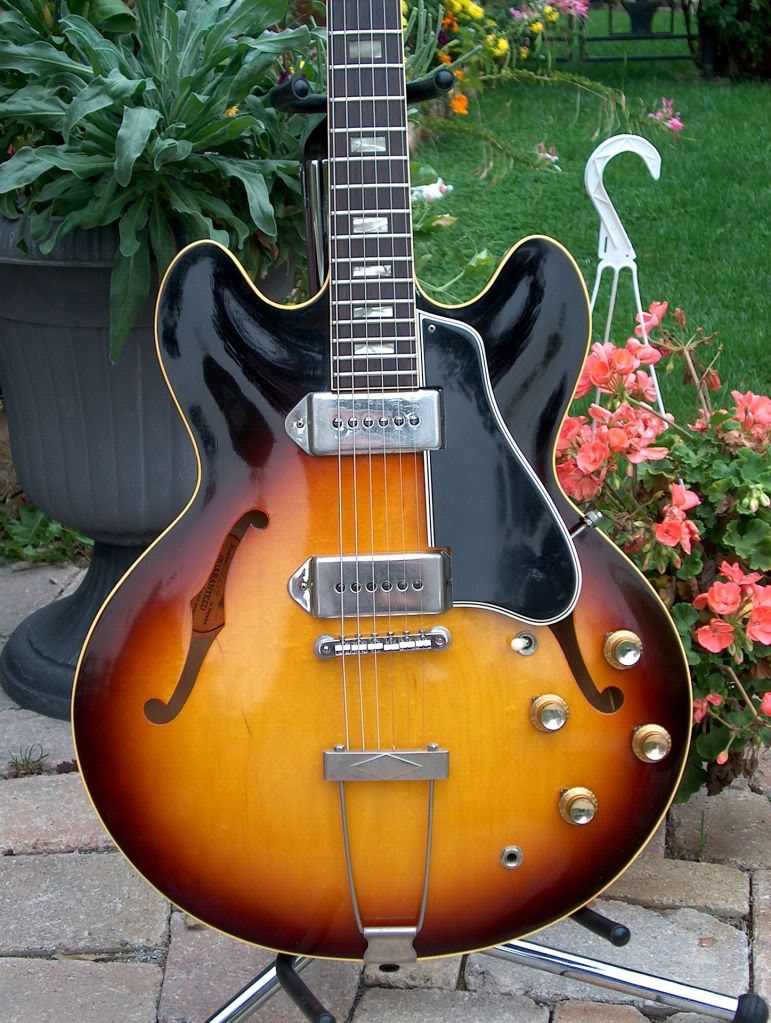 My first bass was a Kay K-1B like the one below - a cheapo mail-order catalogue special with short-scale & flatwounds that sounded far nicer than it deserved to. Still regret selling it...

First guitar was a Pearl Les Paul Standard copy - again another nice guitar & one I wish I'd kept hold of... 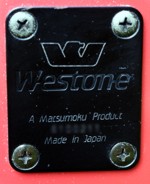 My first, first was a Kawai steel string acoustic that a friend of my father found in a room he was renting out when the tenant moved. The guitar was horribly abused, bent (I didn't know about truss rods then, I think a big tweak might have sorted things out) and had a big hole at the back. The bridge pins were long gone and replaced with odd bits of wood and plastic and the action was measured in feet, not millimetres. It was a dreadnaught size and certainly toughened up mu left hand and fingers. It may still be in the loft back at my Dad's house. I haven't played it for 30+ years.

My next guitar was a nylon string acoustic I dragged out of a dumpster in Las Vegas. My grandmother's neighbour had thrown her no-good boyfriend out on his ear and thrown his guitar out. He never came back for girl or guitar. I still have that one, my next door neighbour is currently using it to play in his folk ensemble.

My first proper guitar was one I bought from J.G. Windows in Newcastle on 9 June 1984. I had saved up my money from my Saturday job in a frozen food shop in Barnard Castle and made the big trip up to the toon with a mate. After agonising for most of the day, I decided not to get the Tokai Strat I had initially intended to buy and instead bought a Yamaha SF1200 for £199 (I think they wanted shot of if, list was £399). I've had and played that guitar ever since. These days Westone Spectums are the workhorse guitars and the Yamaha is in semi-retirement. 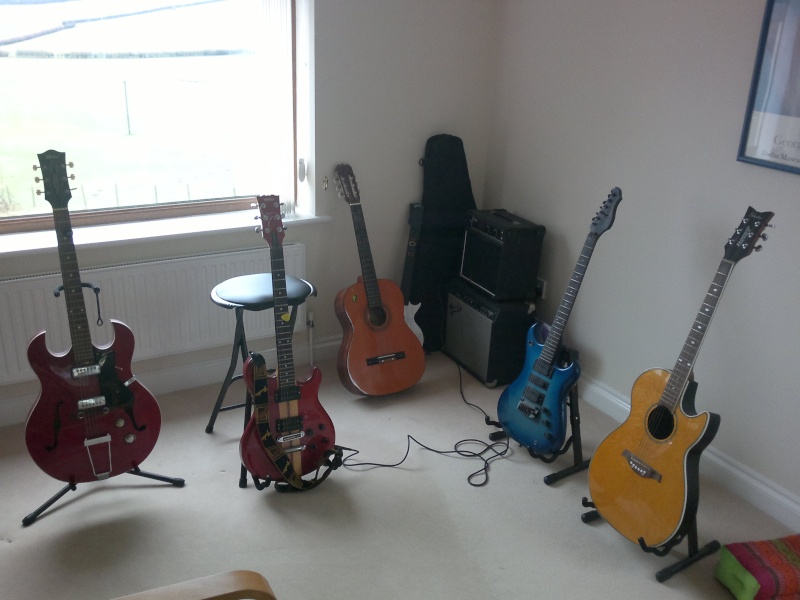 I'll see if I can dig out some pic's

My first Electric guitar was a Lotus LP copy right out of the Sears Catalog. Before that only a no name acoustic used in music class at High School.

My first was an Artist strat, cheapo ply jobbie, a sub division of Tokai I believe.
bought it from a guy in a goth band (my other half's boyfriend at the time, the guitar wasn't the only thing I got at a knock down price from him

It was black and in great condition upon my ownership, but me being 19 took its toll on this, so off came the black, then off came part of the large 70's style F***er headstock in an accident, and after many years so did all the original hardware, still have 2 of the 3 "tall boy" (dimarzio?) pickups somewhere. 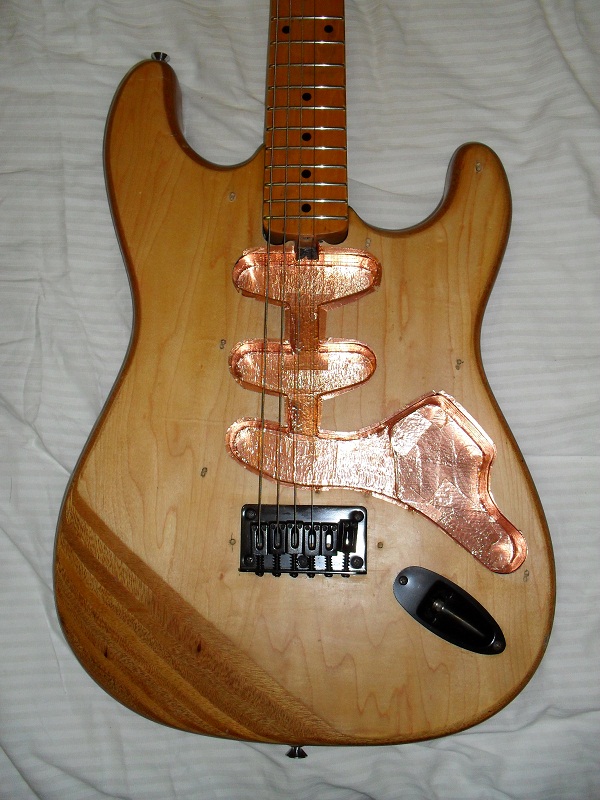 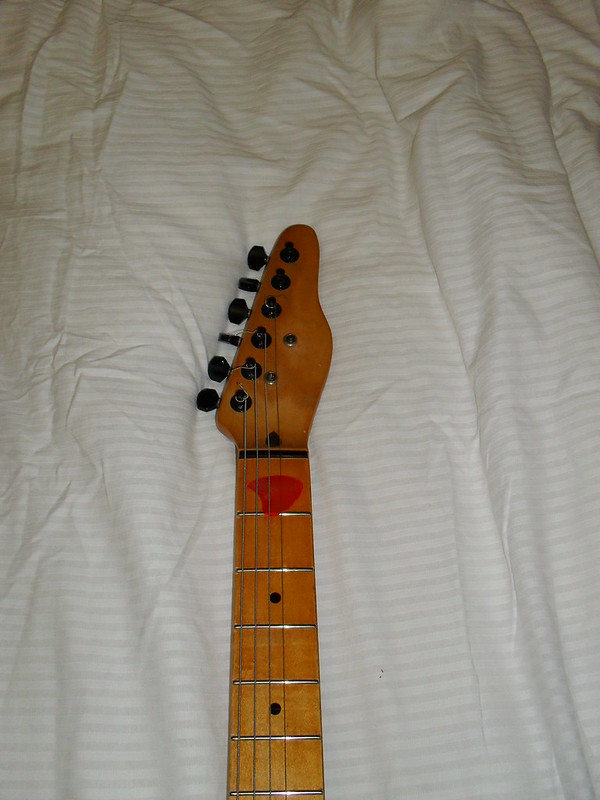 This was my first refret, before I had better tools, suffice to say it's not been played much since.

Similar topics
» Have a look at the guitar in this ad...
» Help to find out the model of this Westone guitar
» No guitar for me, for a while anyway
» New Guitar Day Again
» What can you tell me about my guitar