Here are a few quick n dirty cropped pix of a previous post of my music area just to show the amps. When I get a mo' I'll take some better shots with some details. 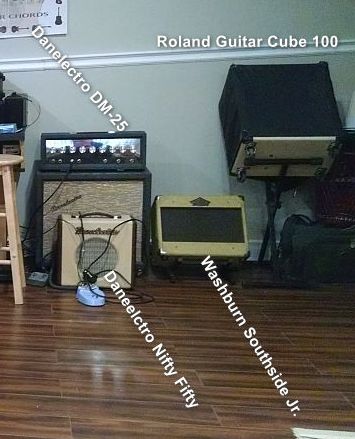 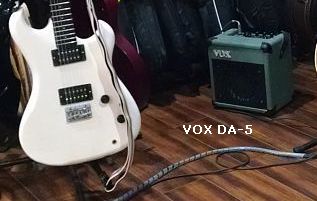 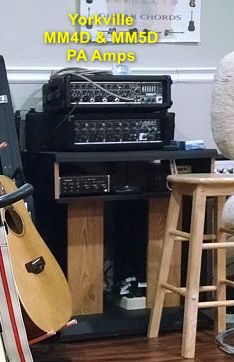 I got me finger out and took some pix over the weekend. Something that should have ben done long ago anyway.
I have lots of guitar photo documentation but nothing for my amps. A glaring oversight on my part so I'm pleased at least for that.

Here's the amp I used during my main gigging days in the 80's and 90's. Not physically large but it weighs as much as a Boeing 747! 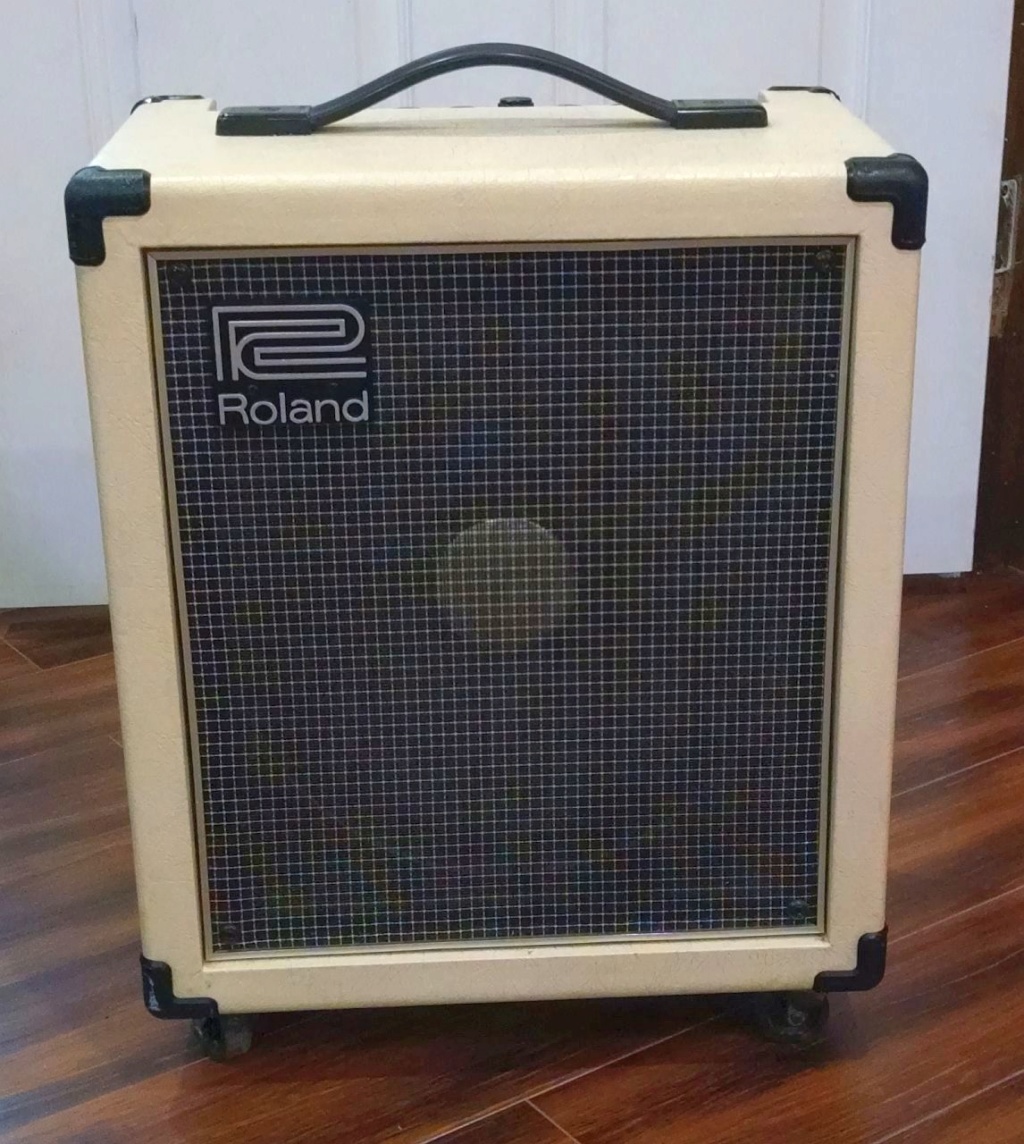 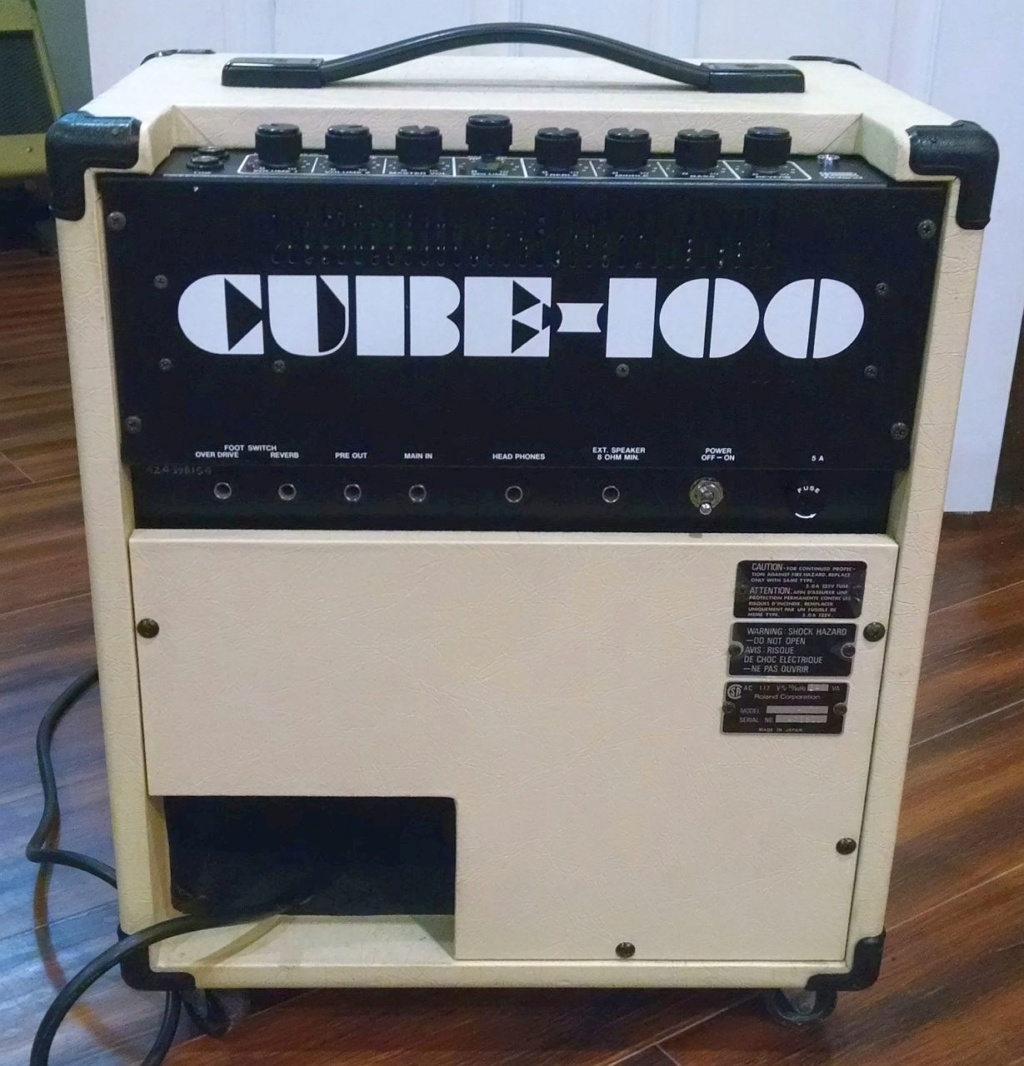 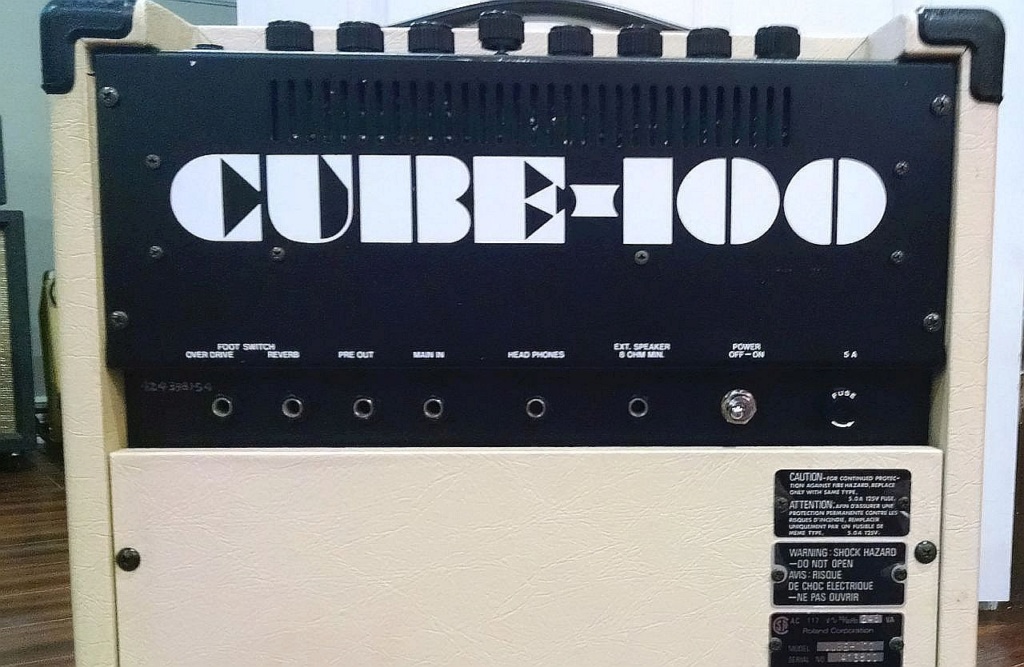 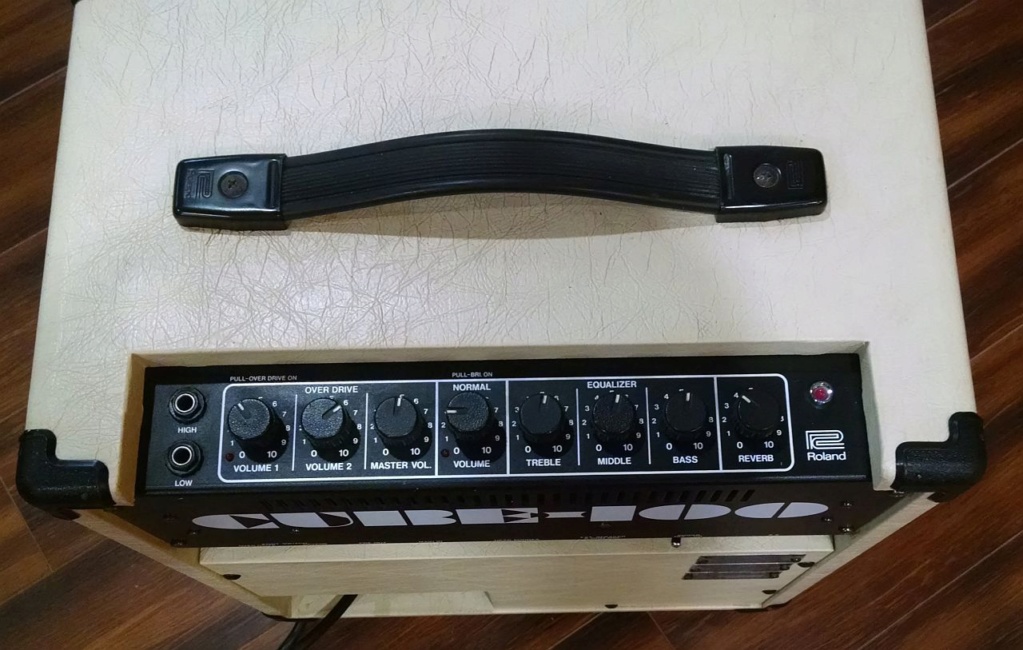 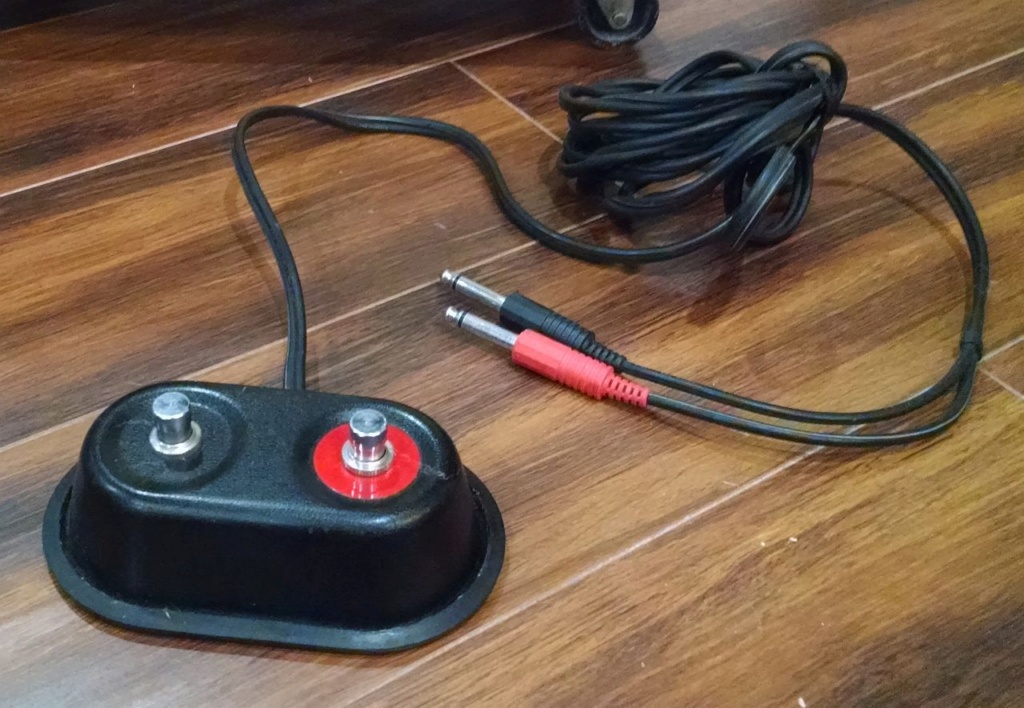 (rollers added by me!)

This particular model is an anomaly.
The CUBE100 Guitar series was soon dropped and was later offered as a Bass amp only! The guitar series has continued with lower wattage offerings, until recent years when Roland introduced the BLUES CUBE 100. We had a couple back in the day at the guitar shop and they were fantastic.

My CUBE100 is a "no frills", straight ahead powerhouse amp with adequate hookup options.
I typically had reverb on all the time and toggled the overdrive. The only effect added was a Boss CE-3 Chorus pedal.

The output is typical Japanese, clear tones across the spectrum and enough bottom end to confuse our bass player!

I ended up raising the amp on a tilt back stand for better projection so I could lower the volume for better band balance.

The Roland Cube was my "big band" gigging amp, but the Dano was my first, and only, tube amp.
It's still going strong and sounding great after 55 years!

Just about every guitar sounds amazing through it, especially my Gibson ES330. That combo was my original gigging gear when I was young and stupid enough to use vintage equipment in a bar! 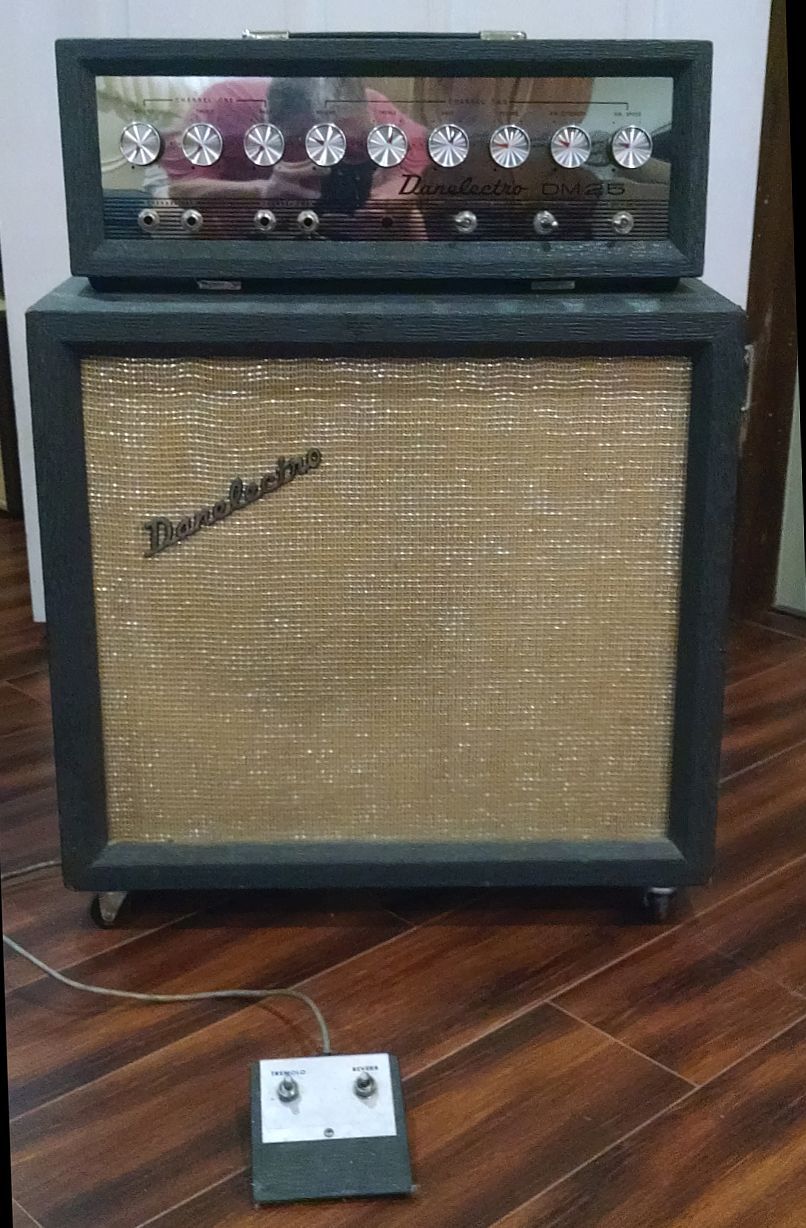 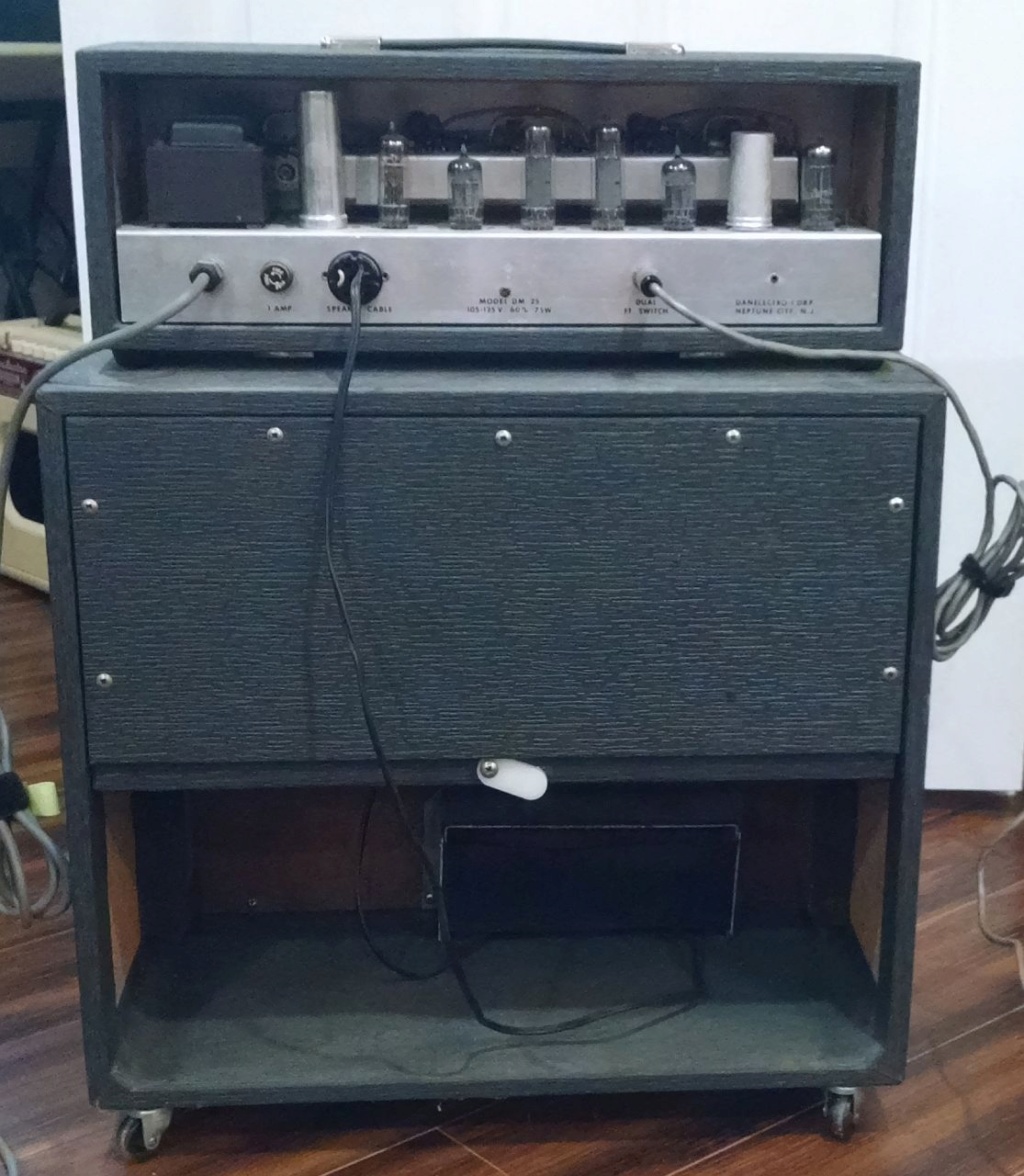 Pay no attention to the man in the mirror! (Those are white shorts not underwear BTW) 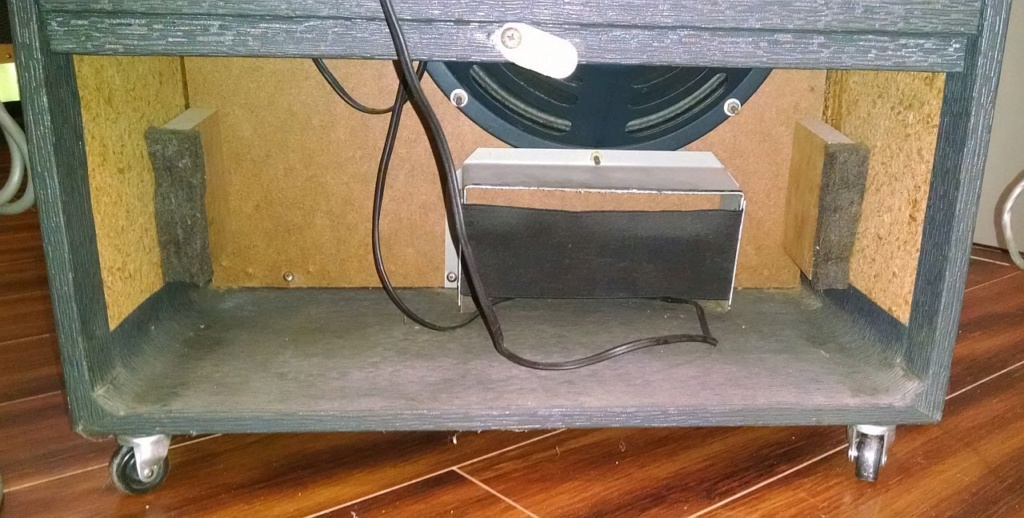 This is an amazing amplifier just perfect for blues especially, and like all original Danelectro gear, you shake your head at how it was made. Like the masonte guitars it shouldn't work at all!

And yet here it is, and everything is original including the tubes!! The only concession I made was to have the "death cap" removed from the circuit and the wiring made safe from electrocution. It's a wonder we all didn't go up in smoke in the 50's and 60's!

The entire unit is quite light weight, made of particle board covered in a tough textured vinyl. The head is completely detachable from the cab and originally came with about 20ft of speaker wire! You could place the head and controls next to you if you wanted and still have the cab at the rear or side of the stage. I had it trimmed back at the same time the amp was serviced. It was awkward dealing with all that extra pile of wiring.

The head and foot pedal tucks away inside the cab for storage and transport, Very handy.

I'm a huge Dano fan until this day based largely on my love for this amp (I was indoctrinated at an early age!).

I picked up this little amp in 1996 because I didn't have a practice amp to fiddle around on and I wanted something portable to take on weekend trips etc.

It was a completely serendipitous buy while browsing in an out of town music store and I found out later it was used almost entirely on Rory Gallagher's final album, 'Fresh Evidence.' Apparently he miked it and went direct to board. 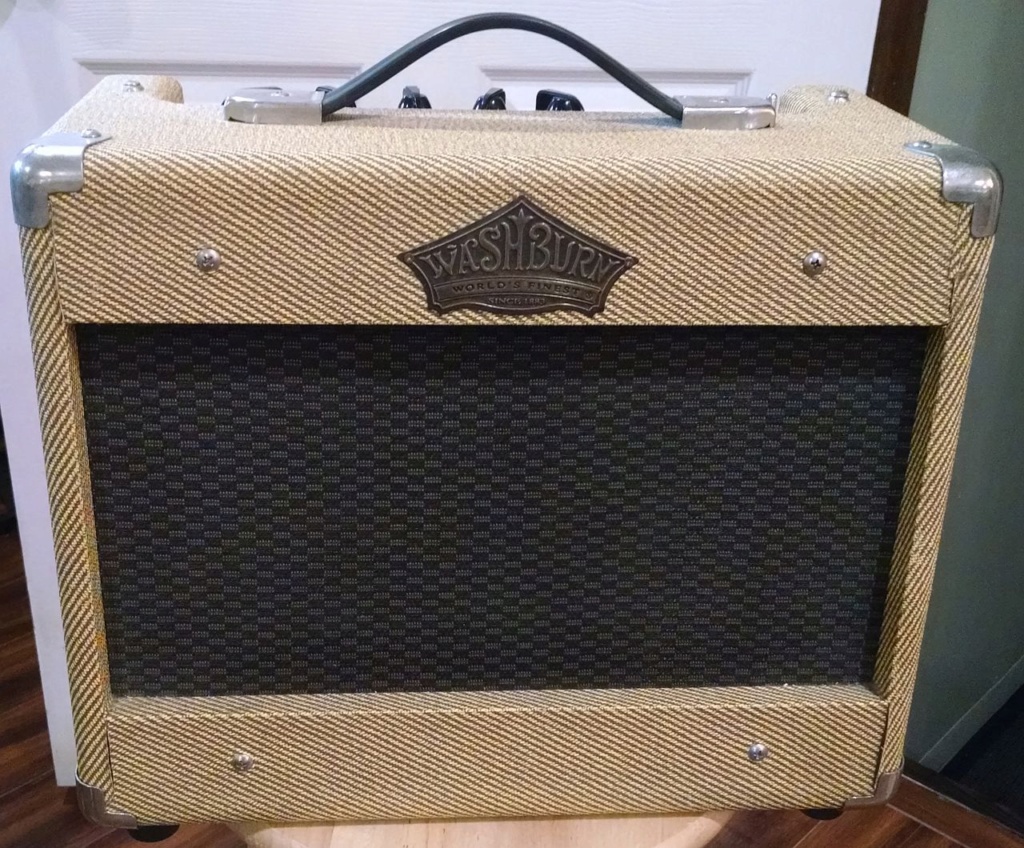 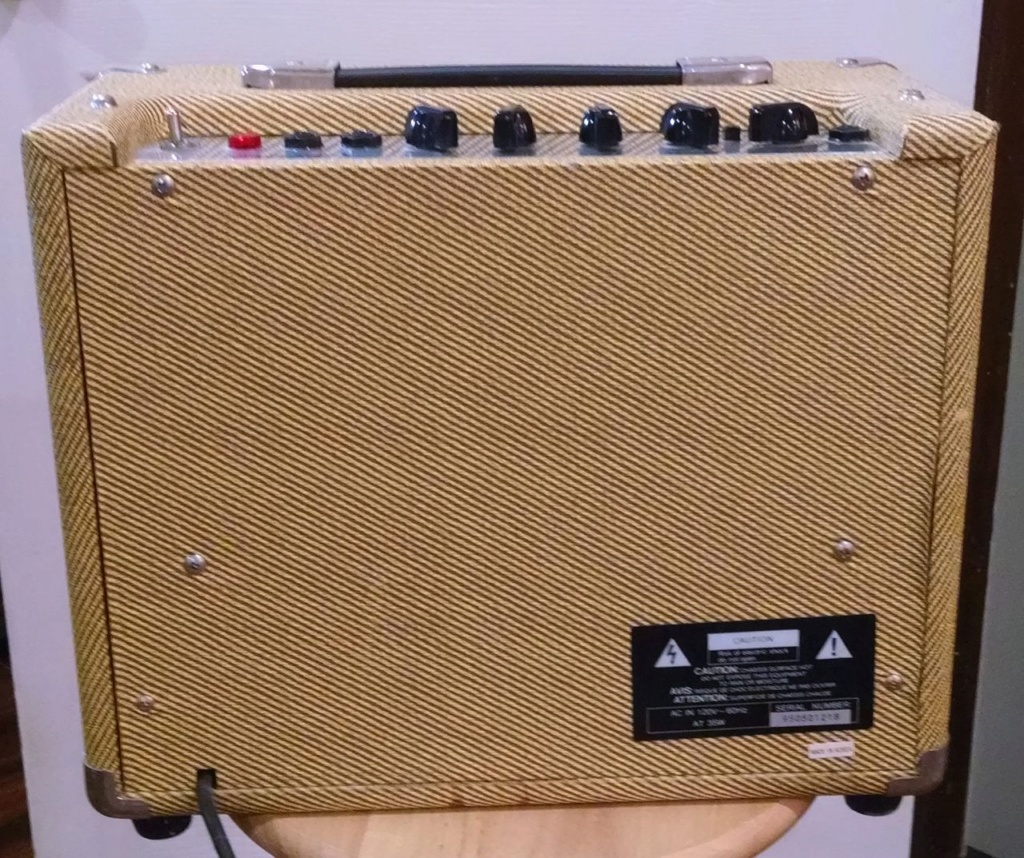 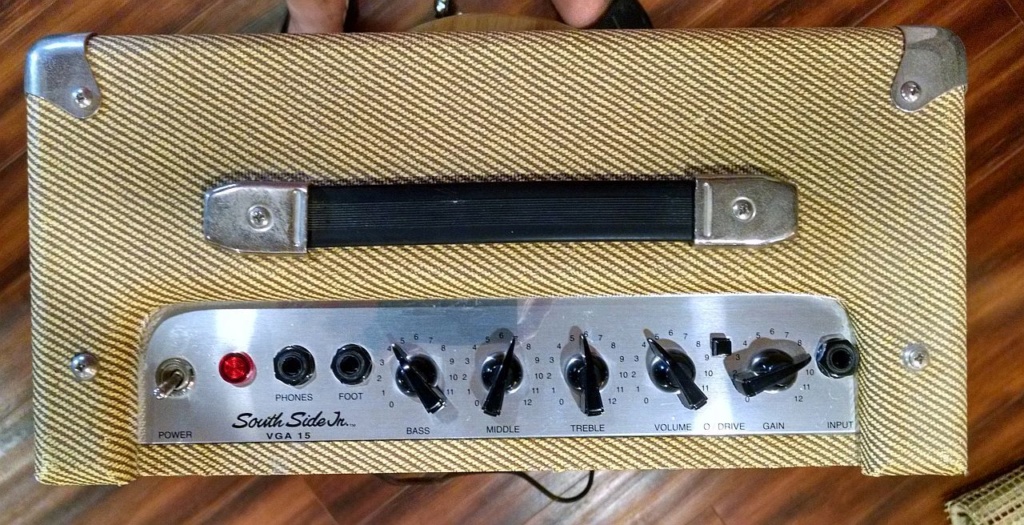 A very funky little amp, especially with some overdrive. I don't care much for the clean output.
Don't use it much but it sounds good with some of my guitars. And, ya gotta love the tweed!
_________________
"A little song. A little dance. A little seltzer down your pants." -Chuckles the Clown

I almost didn't keep this little guy. It came with an Epiphone Studio that I bought on Kijiji in 2008.
What did I know? I figured I'd flip it.

Then I played it!
Well, let me tell ya. This is small but it's astoundingly versatile and sounds wa-a-ay bigger than it's 6.5" speaker! 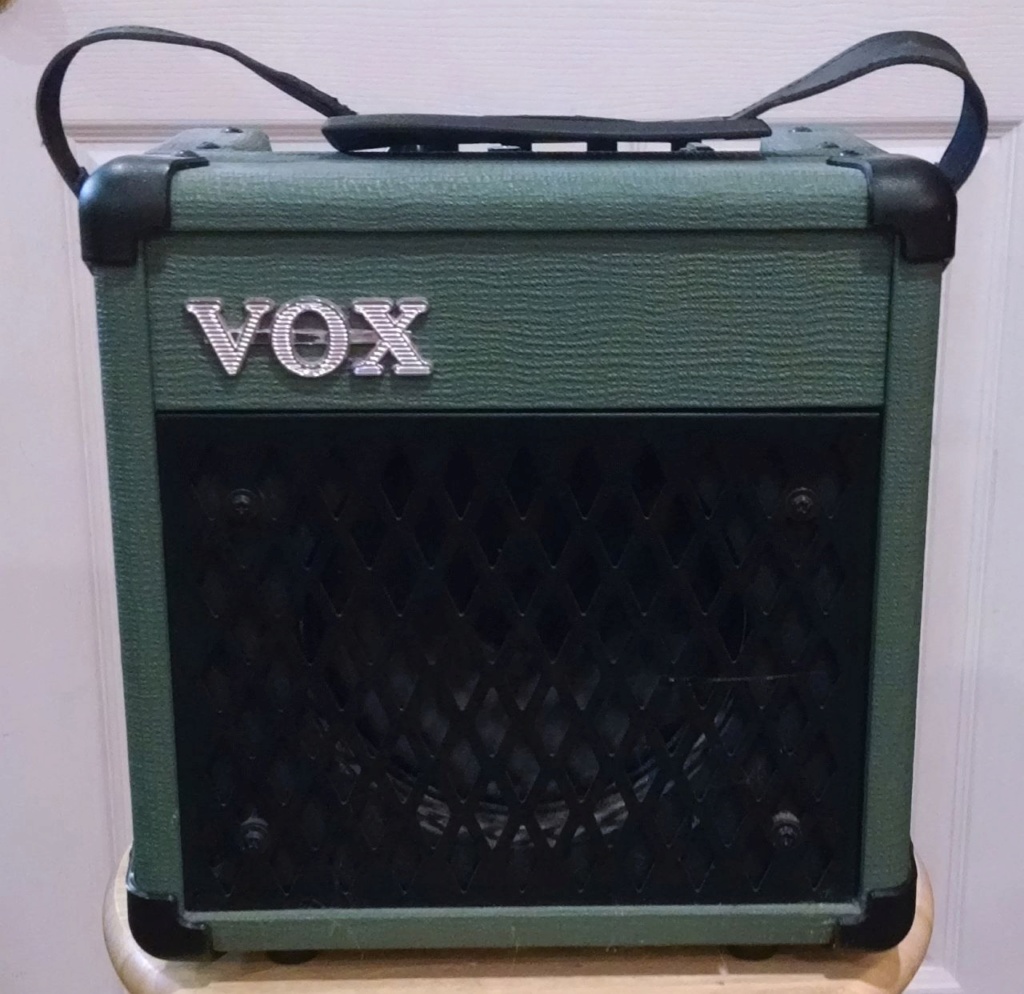 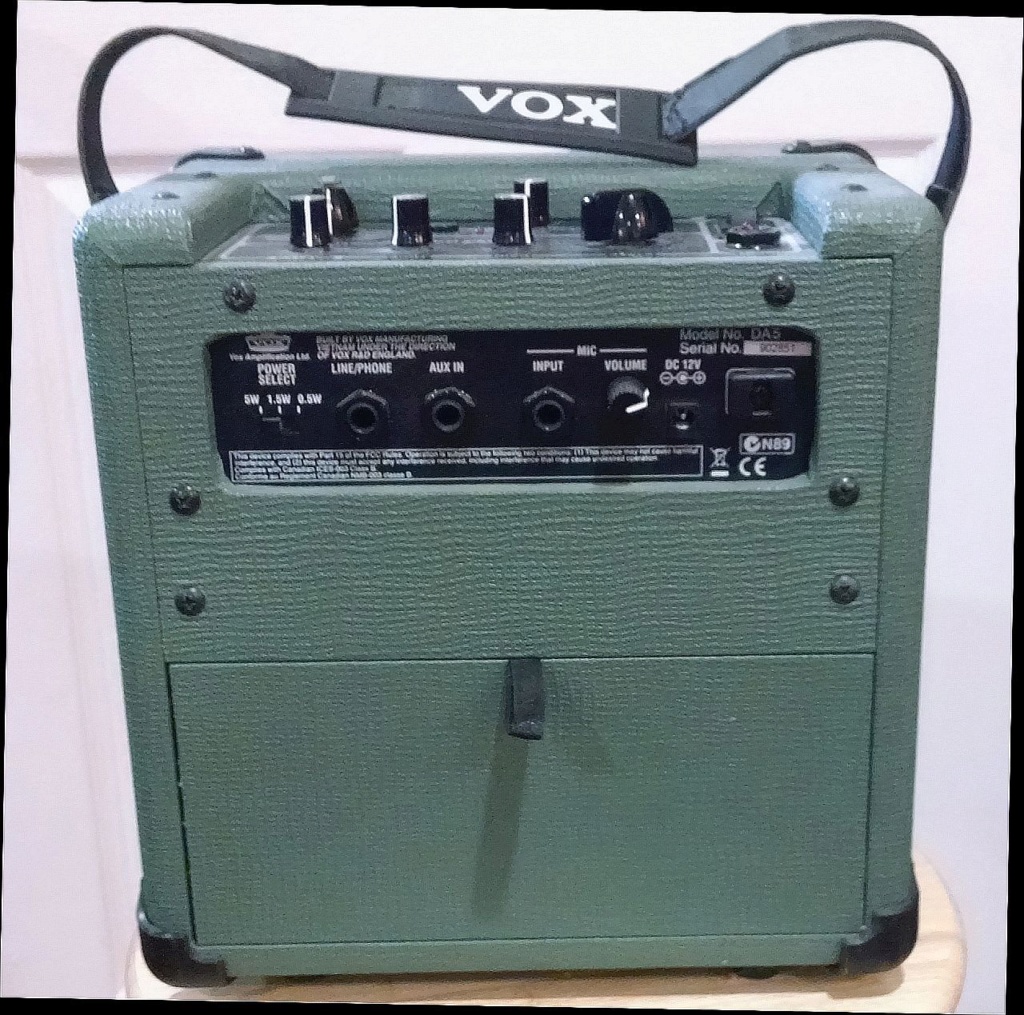 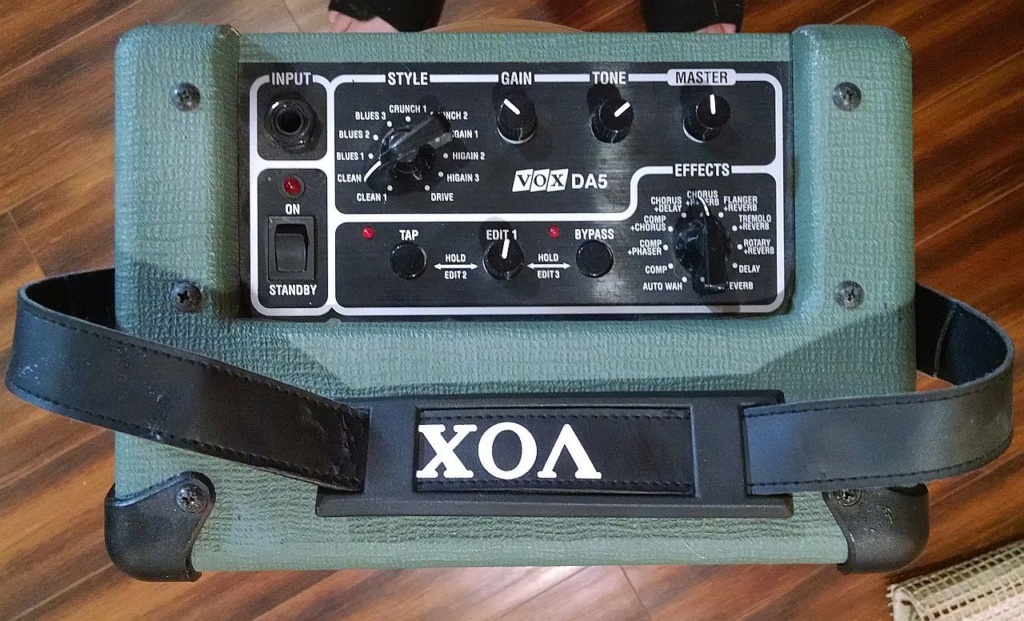 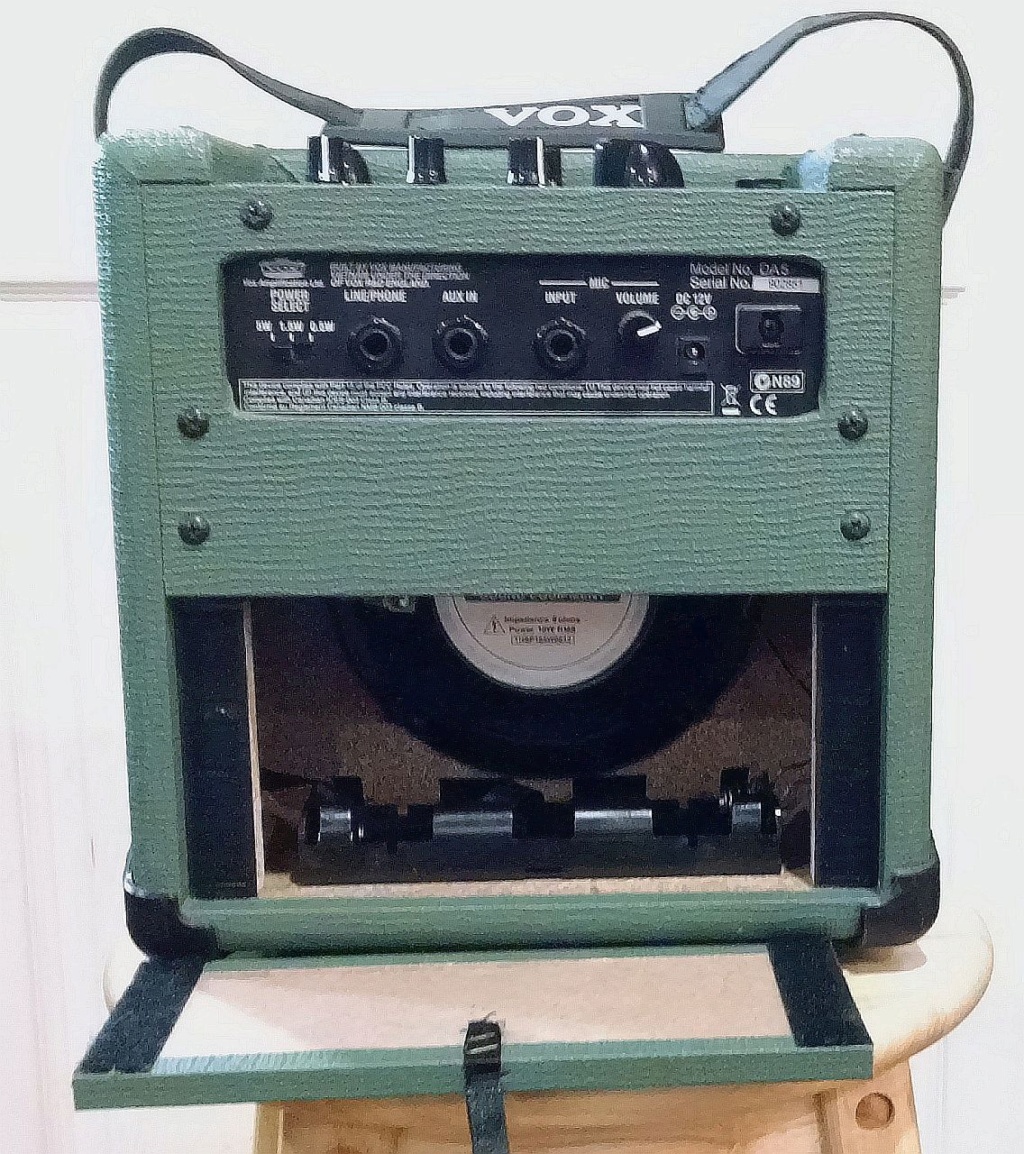 Made in Vietnam, and believe me it exceeds it's rated 5 watts. Remarkably versatile and programmable. And if you need more "oomph" you can patch it into a bigger amp and it becomes an effects board!

As a bonus it runs on C cell batteries if you want to go wireless in the back yard or go busking on the street.

I can dial in just about any sound I need and it's been my main 'go to' amp in the music room for a long time now.

This is another one of those happy accident stories. It was included in an unbelievable Kijiji buy of a Dano DC59 guitar.
Again, I thought I would not have any use for it and planned to flip it. And then I played it!

As a Kiwi friend of mine is known to exclaim, "Holy snapping duck poop! (he didn't say poop)" This amp is downright unbelievable!
It's solid state but you would swear it's a tube amp.

Fabulous tone and frequency response. Cleans are outstanding and the overdrive needs to be heard to be believed. I add a little slap back echo with the Danelectro DanEcho pedal and the world is a happier place. 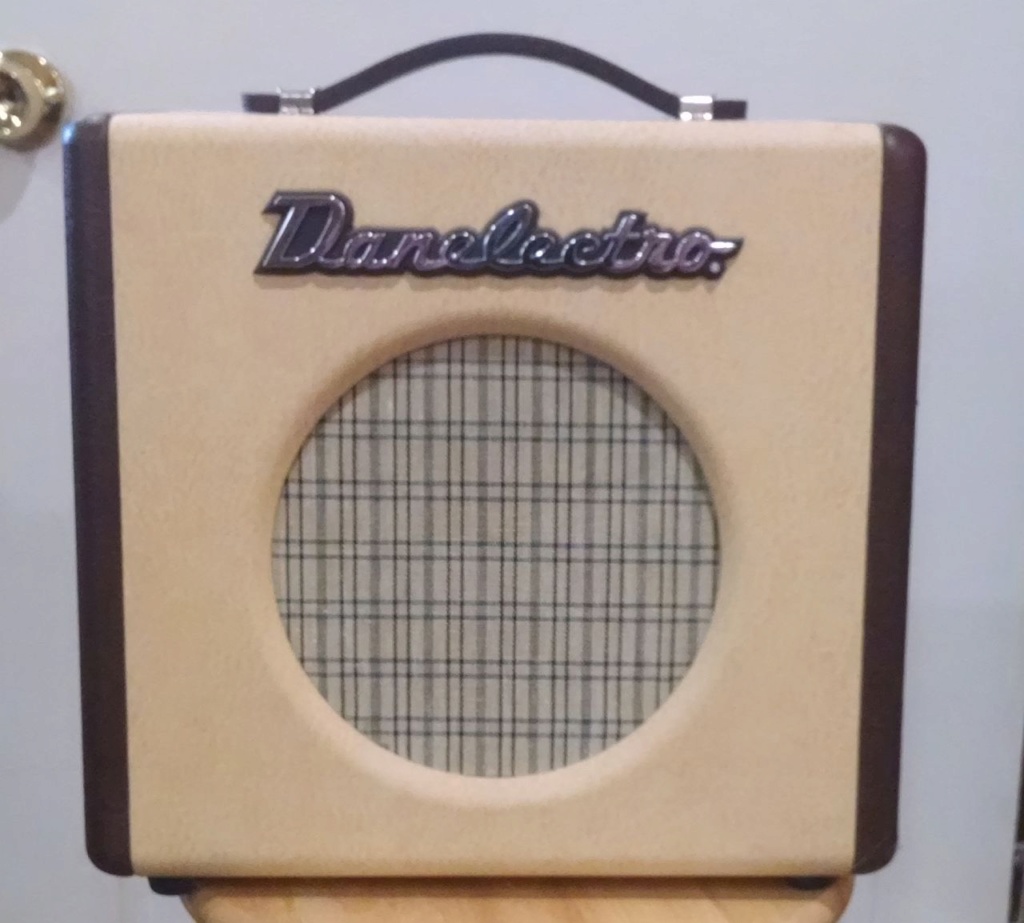 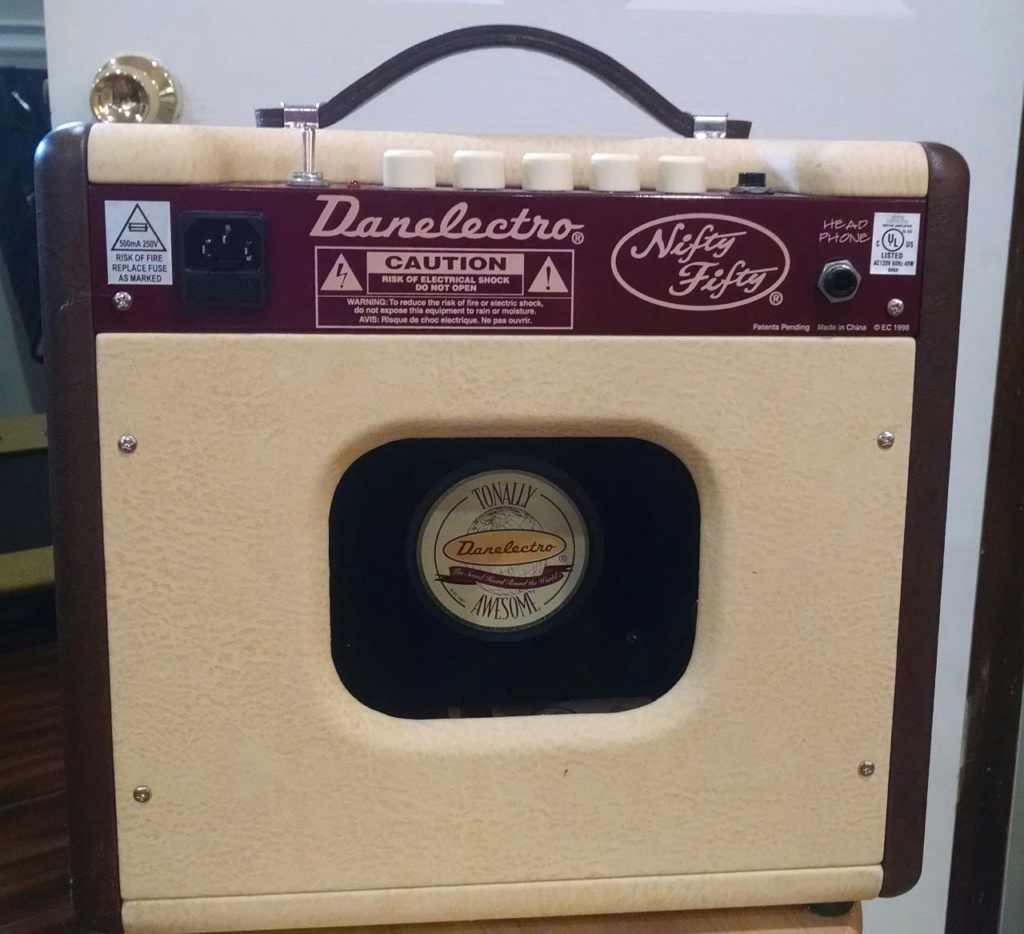 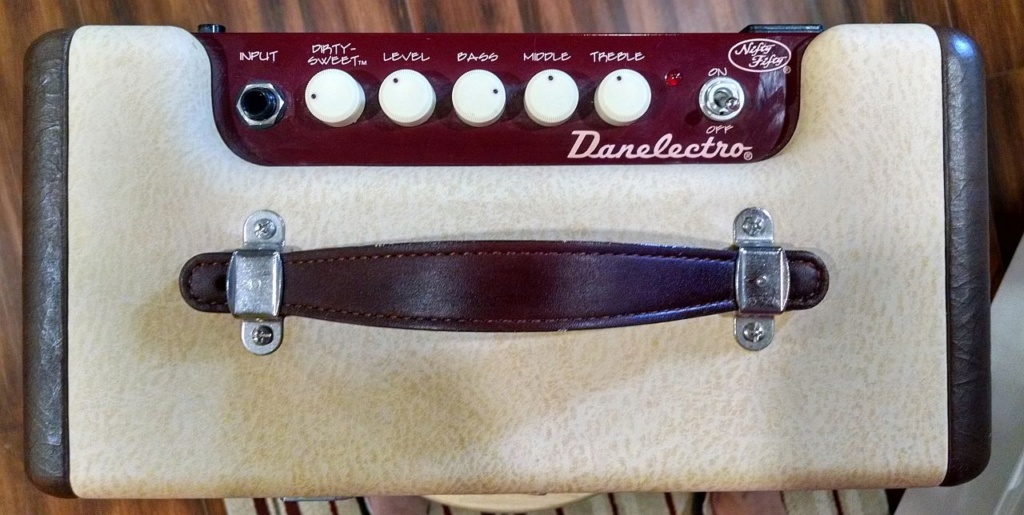 This has quickly become my current favourite plug and play amp when I'm in a quick n dirty playing mood. A complete surprise and a beautifully sounding amp.
_________________
"A little song. A little dance. A little seltzer down your pants." -Chuckles the Clown

just great that you have kept it in such terrific condition too. it looks like new.

any idea how much you payed for it back that many years ago?

Thanks Mike. Yeah it's still a wonderful piece of electronics.

I bought it when I was about 20 years old. Couldn't tell you what I paid but it was a lot at the time relatively speaking.