A visit to Uncle Dons' Emporium of Old, Desirable Instruments has yielded me a new weapon....

Um, it's 'cuz we're both members of the Matsumoku Forum where he first debuted it.
K?

Alrighty, then Chad; just for you... 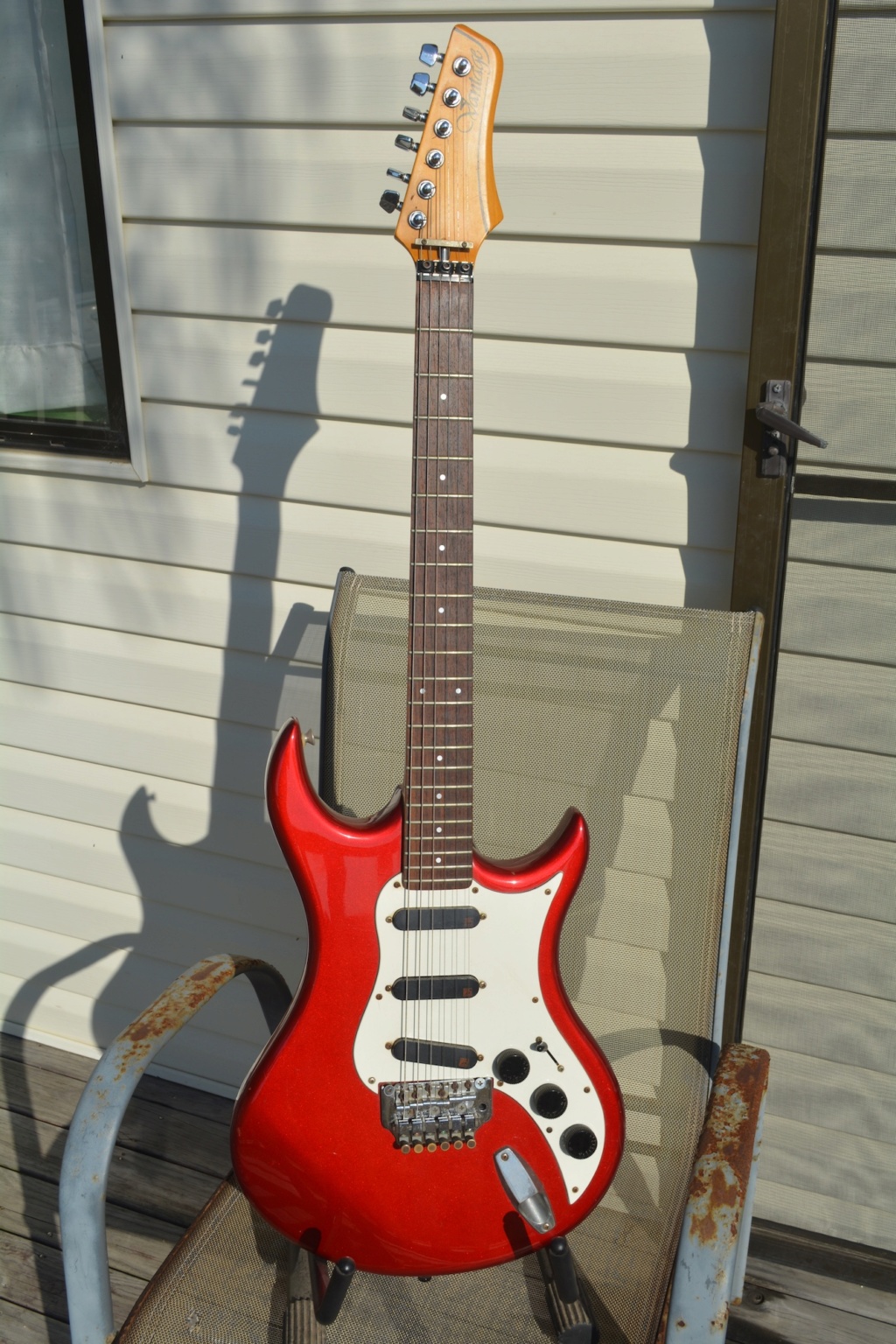 I was visiting Don and was bemoaning the fact that I didn't have a Matsumoku 3 s/c guitar and was 'sort-of' looking for an Electra Phoenix X175JB when he said he had this little gem... I do like me an Avenger so this was love at first sight!! 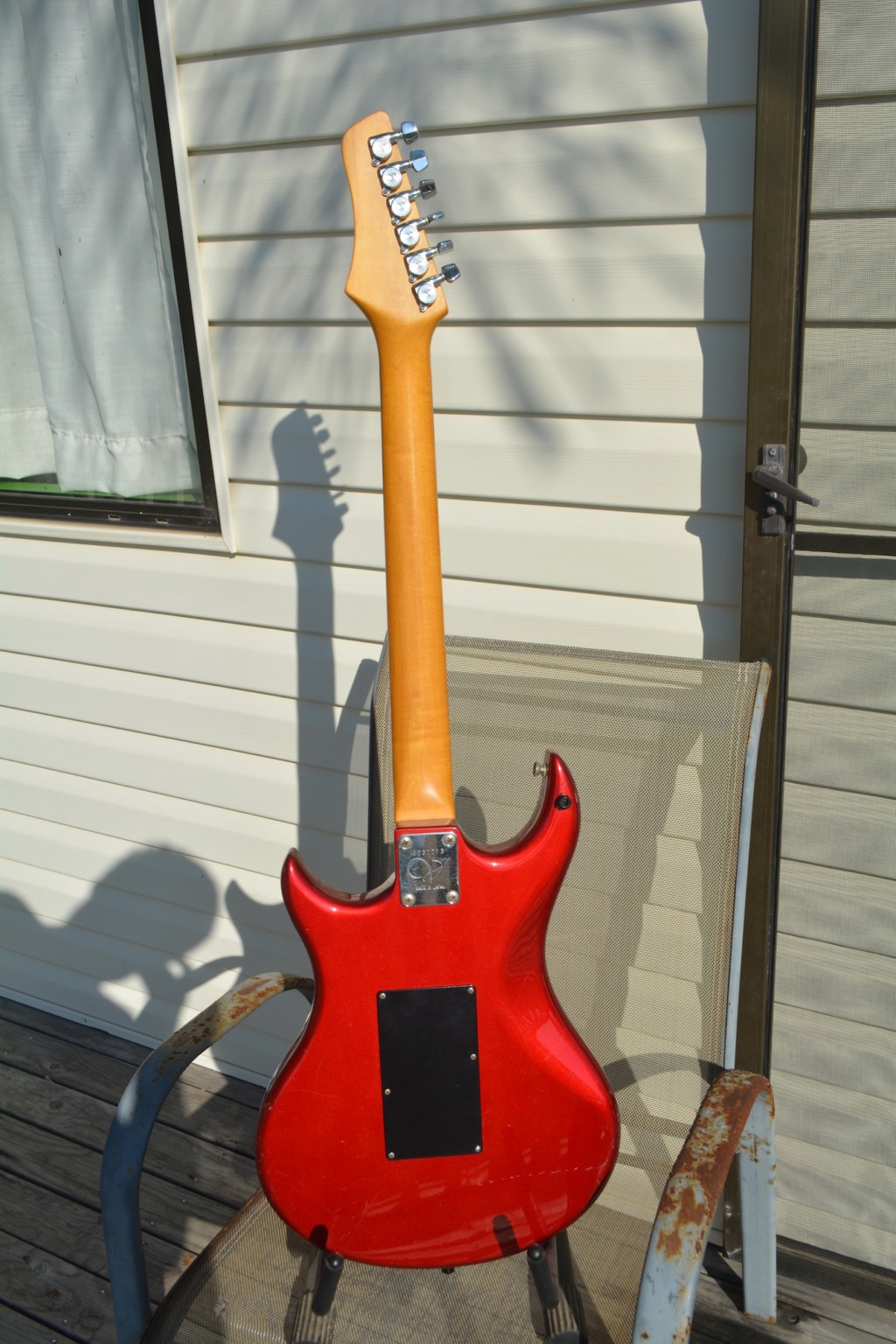 The colour is sparkly red and that Schaller straplock pin was there when Don bought it... I don't approve of it but can certainly see why it was put there!! 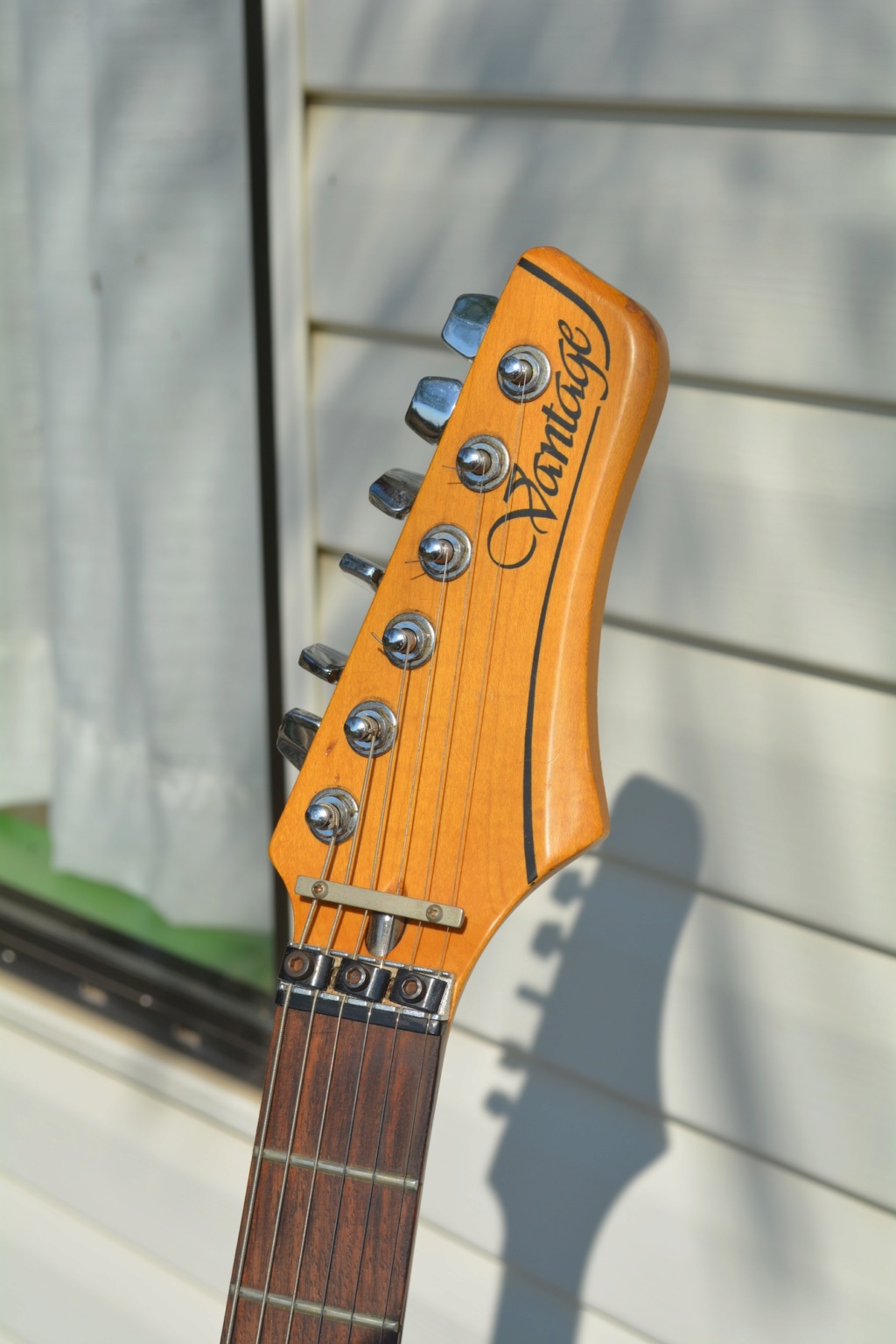 Notice the string hold down bar ... BEHIND the stringlock?!?! Note, too, the lack of "Avenger" nomenclature on the headstock... the first hint of something awry...

So.. the neck heel confirms the model... there were numbers in the neck pocket as well, but nothing that made any sense... 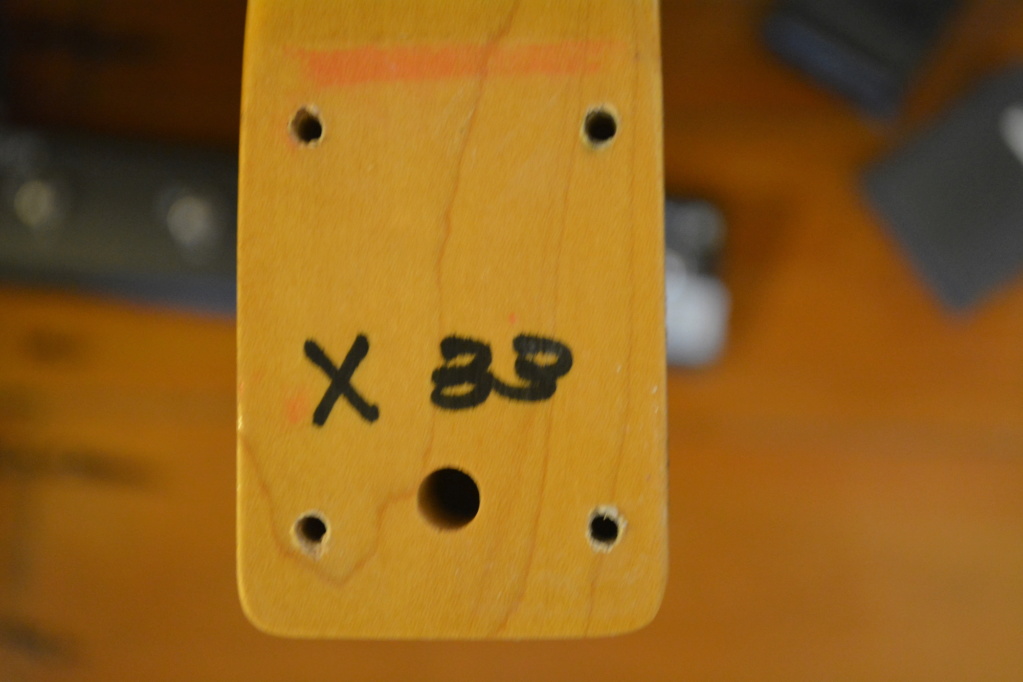 ... and the underside of the output jack confirms the manufacturer; Chushin Gakki, so not Matsumoku but still Japanese, so I'm well pleased! 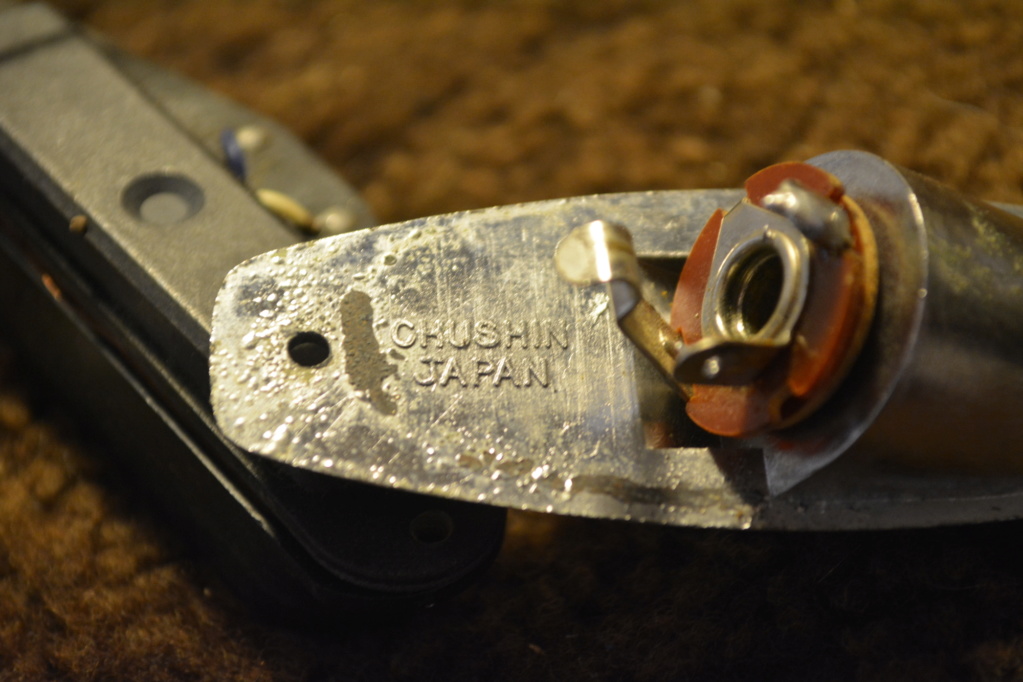 So. I played it briefly, noted that I liked it, and then stripped it down to have a good look at what was what! Everything was OK apart from a small fillet of wood that had come away in front of the high E string anchor, allowing the string anchor to move forward and not actually function as intended by the designer. I glued it with white glue, clamped it and moved on.

Fast forward to set up, and I had the strings on and was bringing them up to tension when I noticed that the freshly glued fillet had just popped out under string tension.

I thought about it for a bit, pulled it all to bits again, epoxied the little piece back in and then epoxied a small piece of pre-bent and pre-drilled aluminium plate across the area in front of it and secured it in place with two small woodscrews... which were a bastard to get in! Belt and braces, I know but I figure that it is not going to move again!
The tolerances here are really tight and I had to ease the volume pot hole in the scratchplate a little wider to ease its' placement... 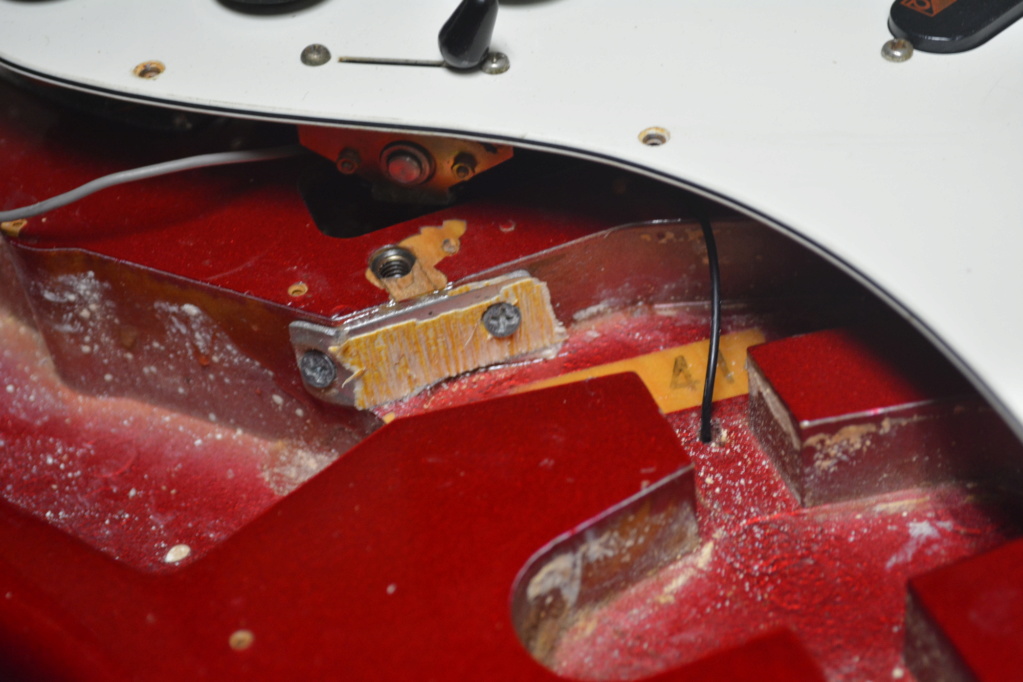 No dramas!! I then put it all back together again, re-tuned it a whole lot of times - floating bridges are fiddly! - and took it upstairs to plug it in and hear it sing!

Off with the bridge and scratchplate... eventually find not one but two small breaks in the wiring which I re-soldered, and so for the third time I nailed it back together again. Re-tuning  and intonation took another half an hour and then back upstairs... RIGHTEOUS!!

I wonder when it was last played with a properly adjusted bridge, but two days later, the tuning is rock solid and within a cent or two of where I set it...

I'm still digging it Johnny!
An "Avenger" by any other name. . .

So good, John!  I love the color, and the shape is bad to the bone.  Congrats!

Chushin was known for quirks.  In particular warped necks, which a lot of them were birch!  Your's is obviously not, so no worries there.

All in all, you have a great belter on your hands.  Very cool...

Surprised you never put a photo of the pickups/electrics up.

Underneath the scratchplate while it was off??

The Chad wrote:...Chushin was known for quirks.  In particular warped necks, which a lot of them were birch!...

I haven't experienced a Birch neck but I do have some assorted furniture made of it and I can tell you it is hard and durable. I would think very similar to Maple, at least in that regard.

As for tonal value, the neck doesn't contribute a whole lot so theoretically it should be a good replacement. Warping may have something to do with the grain closeness/consistency and the selection process perhaps?
_________________
"A little song. A little dance. A little seltzer down your pants." -Chuckles the Clown

The problem was that the birch was slow to dry, they used it still green.  Causing the problem.

Thanks, chaps!
Damian, oddly; no, I didn't think to, eh, but it was a stock standard strat setup complete with a whacking great green capacitor! :-)
i will the next time I change strings.
The knobs are kinda cool; speed knobs with a non slip ribbed rubber ring on them...

The Chad wrote:The problem was that the birch was slow to dry, they used it still green.  Causing the problem.

A little update on this....

... I noticed that the treble bridge post was leaning forward a bit so - being curious and all - took the bridge off and the scratchplate off to see what was going on. Turns out that the wood was bruised and quite soft so while my repair was holding spectacularly well, the damaged wood was compressing and allowing forward movement of the anchor.... which is undesirable.
I reamed out the damaged wood, cut and shaped a bit of dowel, epoxied it in... drilled a new hole and whacked everything back together again.
Should be apples now!