I've got a miserable little problem which is beginning to haunt my thoughts and tax my patience.

I have 3 Vintage brand guitars (sold by John Hornby Skewes in the UK, and designed by Trevor Wilkinson) all of which I like very much. For reasons unknown, the pickup on my VEC380 acoustic-electric has decided to make my life miserable.

Here's the guitar in question: 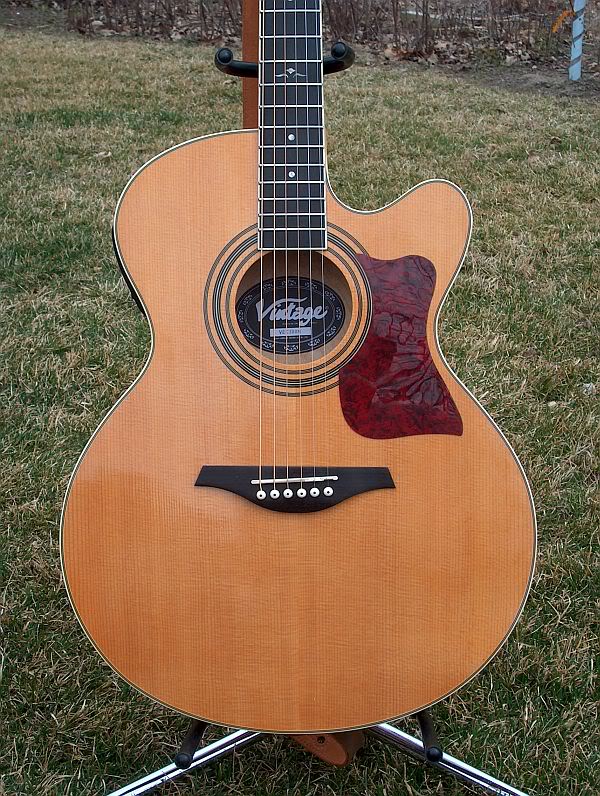 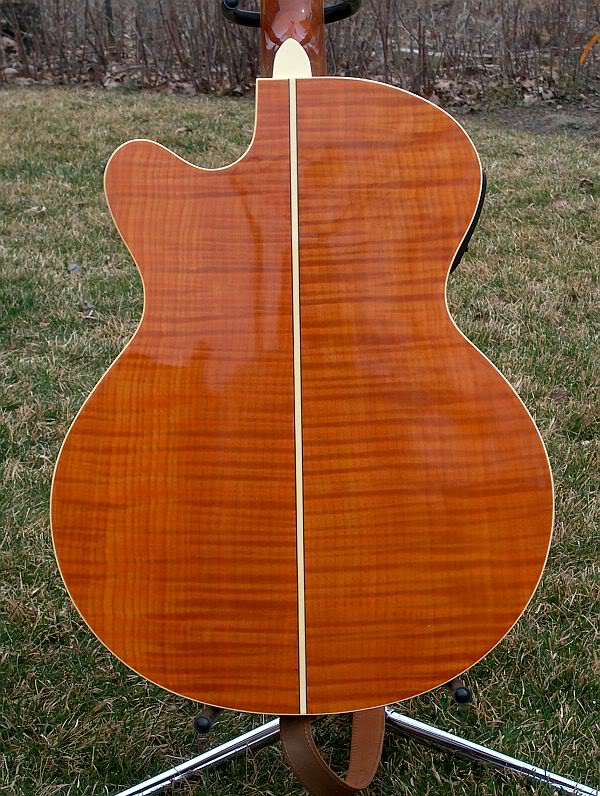 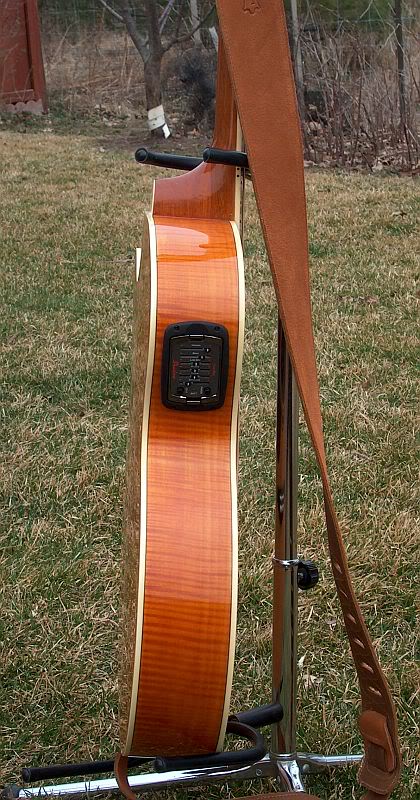 I won't get into all the specs but as you might tell from the pix, it is a very nice build using good quality materials, and it plays beautifully, at least for me.

The electronics are top notch, a Shadow SH Five Plus pre-amp, feed by a NanoFlex under saddle transducer strip, and out to a matching well sealed end pin jack. The system is German engineered and has been performing nicely up until about a month ago. I'm suddenly getting massive humming/buzzing which will quiet down when the jack is touched. However, there is no signal out to be heard or measured either way.

This normally indicates a grounding issue (loop) of some sort but I have yet to pull the Nanoflex completely out for a visual inspection, mainly because it's a right PITA to get it back in given the shallow depth and my f%^&*!g arthritic fingers! As I say I have no idea why this spontaneously went medieval on me in the first place.

Now here's the odd thing...I have removed the strings and re-seated the strip a few times. For convenience I was using my little battery powered Danelectro Honey tone amp for testing. Each time the guitar played fine. No noise. No issues at all. But plug in to the PA amp or a guitar amp and the howling is unbearable.

To me this reinforces the fact that there is a ground loop at the heart of the problem, since the little amp is not grounded outside of the guitar. All other components appear to check out fine, battery replaced, etc. So the culprit appears to be the Nanoflex Pickup itself.

I'd replace it except: 1) They're very hard to find, and, 2) they're damned expensive! Almost 30% the cost of the guitar!

At this point I'm open to suggestions from the learned membership. Everything is already well shielded so I don't know that adding more would be the answer, but if it is, where?

I dunno, Barry - that would seem to be a grounding problem someplace and it sounds like there might be an issue at the jack - cold solder joint or something?
I certainly hope you get to the bottom of it, man!!

That's the damnable part. Everything is well soldered and sealed in with shrink tubing, especially at the end pin and pre-amp connections.

Beats me how it can just suddenly go haywire like this, there's been no mechanical/physical impact anywhere.
_________________
"A little song. A little dance. A little seltzer down your pants." -Chuckles the Clown

Check for any blown capacitors on the pre-amp.

Thanks for the suggestion Damian. I'm not sure if I can do that but I may try later.

From the research that I've done so far, this appears to be a common problem with the Nanoflex strip. And it looks like they're not even making this preamp/endpin combo anymore either.

The best analysis I've seen is that the Nanoflex actually has another little preamp at the end of the pickup element which is also powered by the battery. If you look at a picture of this item you can see a "lump" there encased by shrink wrapping. It looks very likely that this is the item which is failing. The main preamp is fine.

The whole system (when it works) is terrific. But it is an overly complicated design from what I see. The impedance values are just weird.

Input impedance is 4.7 KΩ and the output impedance is 600 Ω (not KΩ). As far as finding a cheap compatible replacement is concerned it's pretty much impossible. A passive under the saddle system would be not be compatible with the preamp.

Why not carefully cut the shrinkwrap off and see whats in the 'lump' If it's replaceable, replace it.

I suppose that could be done but I haven't come across anyone having tried that. Even if I can identify the part and find a replacement, no guarantees that it could be successfully replaced, at least by moi! That's micro soldering work.

I think I'll be looking at an inexpensive Fishman replacement if I can find something close to the original pre-amp size. I'm not too crazy about hacking into that nice woodwork unless I have no alternative. Even JHS has replaced all their Shadow electronics with Fishman. I guess there have been too many problems, and Fishman is cheaper.
_________________
"A little song. A little dance. A little seltzer down your pants." -Chuckles the Clown

Fishyman are not exactly cheap either.

There's a ton of other units on ebay. Some cheap.
It's finding the right size and position curve of a new one.
Have to measure your hole.

Nice guitar by the way.

Thanks. I really like it and it was a weird one even back in 2007.
Kind of a hybrid, perhaps even a prototype. It really was modeled after a classical and reminiscent of a Chet Atkins model, but with steel strings. This one was not in the main catalogue of the day. There's nothing even close in the present lineup. Everything I see now is very "ordinary" looking.
_________________
"A little song. A little dance. A little seltzer down your pants." -Chuckles the Clown

OK I decided to go the path of least resistance and purchase a replacement pickup.

I managed to find a source in (where else?) Hong Kong. The list price in USD was $29.95, very reasonable, until you factor in $8 shipping (also in USD) and the exchange rate which is currently around 25%! Bottom line, it's costing me CAD$44.

I looked long and hard at replacing the whole system, but most decent pre-amps were larger, as was the under saddle piezo which tended to be braided wire rather than flat. The guitar has quite a shallow body so enlarging the hole did not appeal, neither did I want to get into the hassle of changing the saddle config to accommodate the thicker wire.

Everything I've read simultaneously praises the sound quality of the Nanoflex while complaining about the damn things suddenly coughing up a fur ball and dying. The system apparently was also used by Epiphone in their eSonic systems, as well as other manufacturers, with the same results.

Fingers crossed that this solves the issue as I await delivery.
_________________
"A little song. A little dance. A little seltzer down your pants." -Chuckles the Clown