I just bought a 1970 Granada Les Paul Custom. I was surprised at the good condition of this little guitar - keeping in mind that its 40 years old. Its an amber - colored flame maple topped instrument (I think the amber color is faded considerably from original). Some information from the Mats site indicates that it may indeed be Mats - it looks a lot like the 1970-74 Aria LP line. It is my understanding that "Granada" was a MIJ brand designated for the Canadian market.

The neck is sublime - 3 piece maple with rosewood fretboard. The electronics are all original and somewhat worn, it definitely needs some TLC. The original owner bought it in 1970's, and played a while, and promptly packed away for about 30+ years, and then suddenly gave it up at his garage sale.

I'm not wild about the pickups - they will be changed.

P.S. Here's a first pic (below): EDIT - see more detailed pics in a reply below. 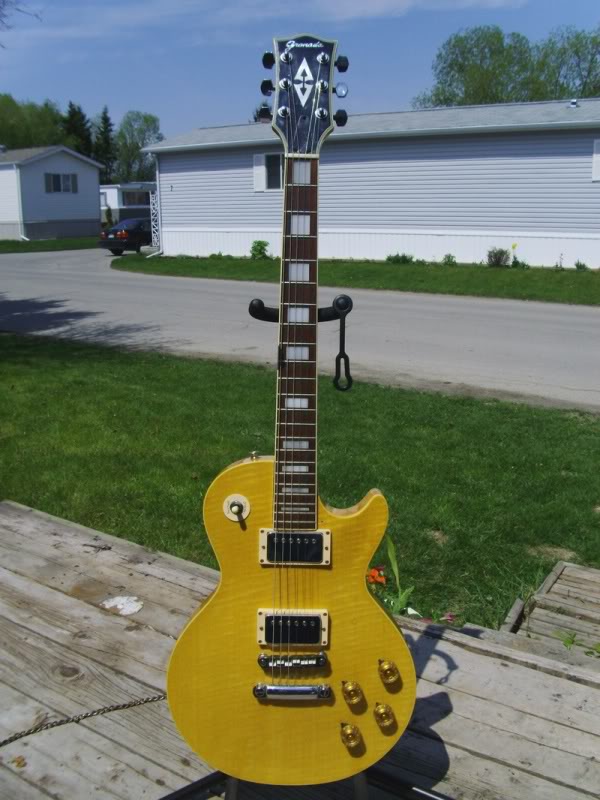 It looks a lot like this unidentified Westone model.

Granada were distributed from Montreal from my knowledge... They were a distribution Co that dealt with the major Brand stores in Canada... I had Granada instruments in the past (always made in Japan) and also still own Granada Tube Amps from the early 70s that were built by different manufacture at the time and rebranded as Granada... (Garnet, Pepco and others...)

You have found a nice piece of equipment, looks like a killer.... I would date her after 1976 since you do not have the LawSuit headstock... If you have the original case, what color is the inside....

Also, forgot... Granada was also available at music schools and colleges along side Aria Branded instruments in the 70s....

Thanks Polly and Frenchy - great to hear from you both... Frenchy -> welcome to this great forum.

Westones, Mats, and Granadas: The genetic link to Westones makes my day. Thanks for the pictures Polly, very cool - the dark LP Westone is gorgeous IMHO. I note that the backplate on the Granada is exactly the same as on the unidentified Westone. The headstock pattern is slightly different on those that have it. With respect to headstocks - the info that I've gathered seems to indicate that the simpler "two triangle" variant is specific to 1970-1975 instruments, while the slightly more complex variant with the middle bar inlay were made from 1976 on. Or I'm wrong (again)...

I will do more digging. I don't _really_ care one way or the other, but it would be good to know for sure.

Dating this Granada: I've read that the pre-1976 serial numbers are random. On the other hand, this one begins with a "7", making it a 1977. However, this wouldn't match the PO's story. Also if the headstock pattern is an indicator, then the double-triangle-no-middle-bar points to '70 - '75. ???

I need to get more info to suss this one.

Below is something I took from the Mats site..(is this OK with you Polly?)

Frenchy - look at this AMP - is this another rebrand? Also I'm interested to learn more about so-called lawsuit guitars - fill us in!!
Best,
Ian

Wow, way to resurrect an old thread for my first post, but I do have something to add about Granada guitars--I do own one, and found this site searching out information on them--mostly for fun.

I believe Granada was a Canadian company that distributed Matsumoku guitars & basses. To the best of my knowledge and experience, they were primarily sold and used by guitar schools across Canada--many of which had a loose affiliation at one time. I was a student of one of those schools for five years. I own both a Les Paul copy & an EB-3 copy.

Another person posted a picture of their Granada here.
(Mine has more of a grain.)
Someone else posted this picture on this site--it's an Aria & a black one, but otherwise is quite similar to mine, including the headstock inlay. My case is virtually identical to the one in this picture as well.

We were told Granadas were made by Aria.

As others have commented about Arias on this site, some of the Les Paul copies had a top that arched up off the back--if you take out the pickups you can see this. You can also see the top is a laminate of wood & plastic.
This did cause some problems with the pickups. The pickups are on the weak side, but removing the covers helped that a bit.

The necks were bolt ons and had the same plate on them as the guitar that starts this thread. There may have been a difference between the guitars made to be sold as Granada and the Arias, but if there is, it would seem to be in which model of Aria. Other types and styles of guitars and basses were sold by the school with the Granada name on them (or in the case of my guitar a sticker with the school's name appeared on the headstock--my sticker is long gone. It was damaged when I had the machine heads replaced. The inner sleeves were plastic and they cracked so it wouldn't stay in tune. I now have Gotohs on them with metal sleeves.

The only other thing I replaced was the top strap knob which fell out right before my band was about to play in front of an audience at a competition.
My teacher let me play his guitar instead.

OK... I think I'm wrong about the headstock pattern, as the more complex version is just like the Gibson LP custom.
I had it backwards. Frenchy you are likely correct - its probably a 1977!

Here's three pages worth of info on Granada branded guitars that I dug up. Good stuff in there!

anaerobe wrote:
Below is something I took from the Mats site..(is this OK with you Polly?)

That's fine by me just as long as the guys from the Mat site are cool with it too!

That's some pretty useful and interesting info that you've dug up there, well done!

Thanks!! The guitar is apart now - it needs a new pickup selector (noisy and only partially functional) and a pot, plus a Duncan Custom 5 is going into the bridge - so the pics will wait 'til thats done. One other think I noticed is that the unplugged tone is very similar to an ES335... because the carved maple top leaves some hollow space over the solid body. I believe this is a design departure from a Gibson, but with what I think is a nice by-product in terms of quality of tone.

To preserve the original look - I have found an SD nickel plated p-up cover for the bridge... and am now busy hunting for a used Gibson neck p-up cover.

Hey Ian, how's it going?
That's a sweet lil' LP you scored there!

The name Granada rattles around amid the one or two brain synapses I have left that are functioning and it rings a very dim distant bell. Seems to me they were fairly plentiful back in the (Canadian) day as Frenchy said.
Never had one though...but they sho' looks good!
Nice going.
_________________
"A little song. A little dance. A little seltzer down your pants." -Chuckles the Clown

Thanks Barry - Here are some new pics, showing off the top, new pup switch, pups (neck is a used Gibson 496r and the bridge is a Custom 5 Seymour), and headstock.

I will install some chrome covers at a later date to preserve the original look. The original circuit board is now cleaned up (globs of excess solder are gone) and it sounds good, switches cleanly from bridge to neck. The pups are wired in series. The top is laminated wood with a maple top veneer. The main body is mahogany. The neck is a triple laminate of maple with rosewood at the frets, mother of toilet inlay.

I'm pleased to say that this Mats guitar is virtually the same as the LP Westone models from the 70's included in westone.info and as pointed out by Polly. To me its pretty special and I'm happy to have found one. I've kept the original pups. 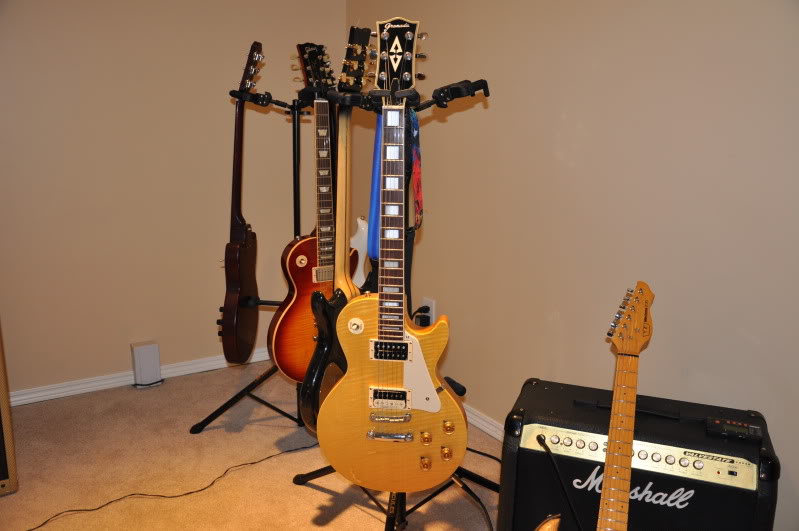 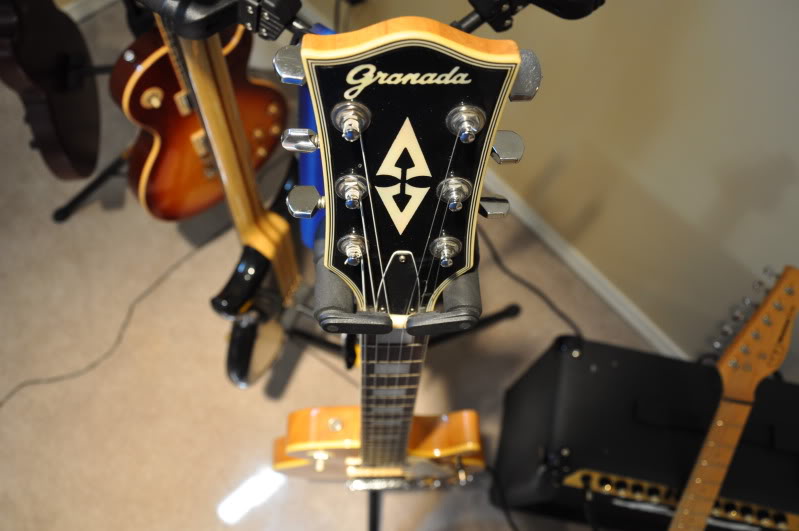 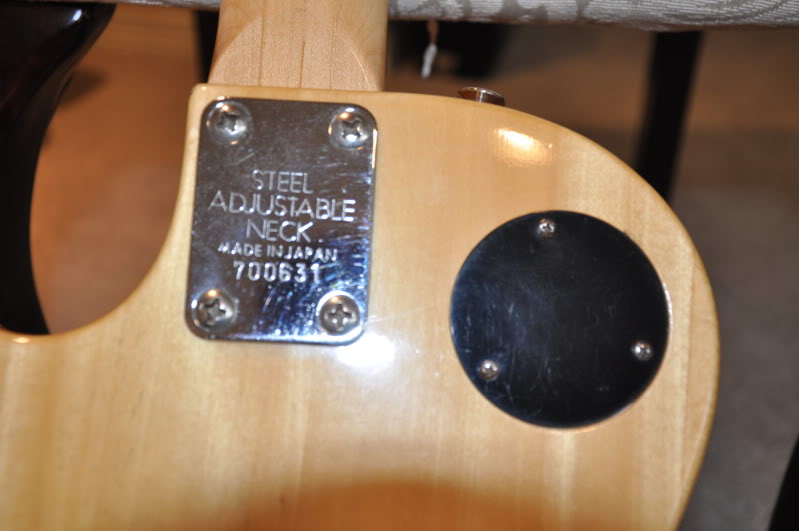 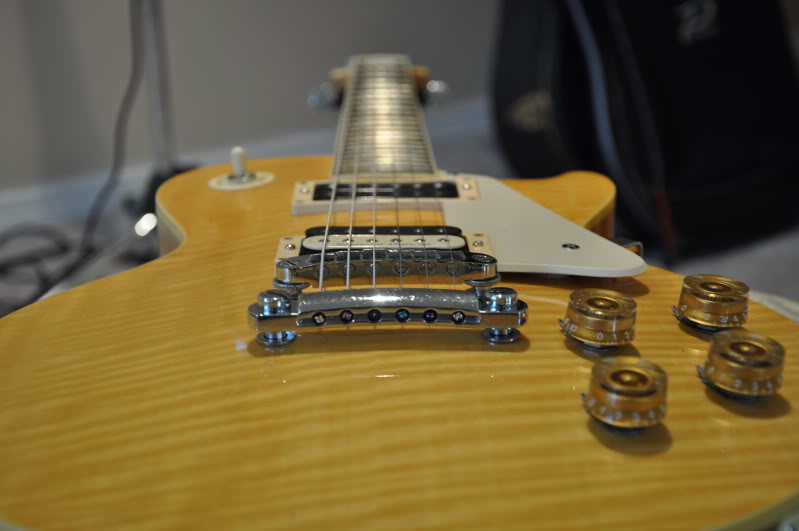 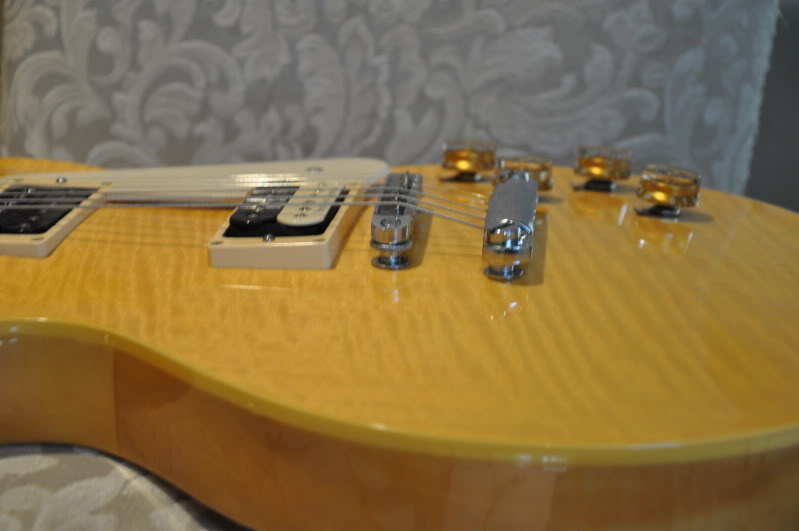 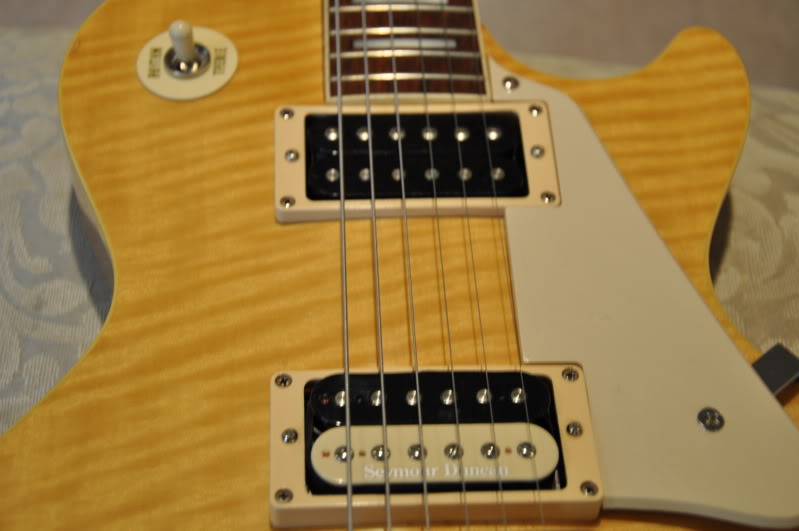