Lookin for a red rail bass, or a rail in need of restoration (any color). Must have orginal pickup,

I'll give her a good home and u a fat wallet! If money isn't enough I will trade a kidney or any other internal organ of your choice:)

You've got heart Pointy... hold on to that one

Pretty seldom but I'm sure a Rail will come around. Will give a heads up.
Cheers mate.

Rails are cool. Good luck with the hunt, Pointy - I think bags of patience is the key, eh!!

I think a bass sold just in December out of Quebec...

That Rail Prototype guitar would be something else to try for sure.

I have a Black rail and love it. It always gets plenty of questions during the breaks at gigs when I play it. The red ones do come up a few times online and look great as well.

Yes a black beat up rail sold on eBay for 217.00$$ I was like a hour late too bid😡 really would have like to fix her up! A prototype rail IS xtremly cool but.... I'm like a rock I'll just wait here as long as it takes till a red rail moves me or I find a one far enough gone to validate a restoration

ORails are cool. Good luck with the hunt, Pointy - I think bags of patience is the key, eh!!

I know where there is a guitar Rail prototype....

GUITAR! Rail prototype WHAT.. Like 6 strings?
Also is their a difference between a production unit or a prototype other then the date it was made??

Pointy wrote:Also is their a difference between a production unit or a prototype other then the date it was made??

All speculative but, to my understanding,

The prototype dates are seldom written on these models but predate manufacturing, they are model 'foundations' for testing and trial. These are very limited in their numbers, probably anywhere from 1 to a dozen depending how many versions were made/modified/revised for the final manufacturing model that went into production. Some prototypes may never make it to production either.

Some production models also have earlier serial numbers than their published sales/price lists as well. As an example, you'll often see a new model introduced in an '85 price list but several serial numbers will have been made in '84 to display the guitars/basses at distribution level and pre-fill sales orders.

That sounds about right. My understanding was that they'd make what they called "focus" instruments and put then out there for feedback before production was ramped up to commercial levels.
I know this because I asked Tom Presley about my Genesis II - which is an oddball - and he told me; he also said that there was a very goid chance that he'd played with the pickups in mine personally!! 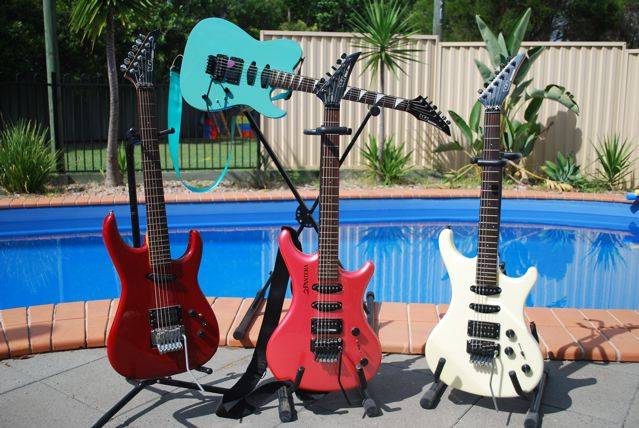 Oohhhh - Nice one John!
Very cool to see them here and appreciated.

okay! you asked for it and here it is… and with the gig bag too!
go get it!
clik

I'm having a great day today... Mainly because Im not trading a kidney for this rail. Somebody would have got the short end of that stick(not me)

And thank you for letting me know she was for sale

And... Thank you for the clarification between prototype n production
All of this is much appreciated

I just love a happy ending.

Eh Barry I'm sry this this fairy tale just became drama lol
I've contacted seller...... Item won't ship to Canada 😀 but its ok five days to figure it out ill let Everybody body know when I own this beauty because I think it was just ment to be

Pointy wrote:Eh Barry I'm sry this this fairy tale just became drama lol
I've contacted seller...... Item won't ship to Canada 😀 but its ok five days to figure it out ill let Everybody body know when I own this beauty because I think it was just ment to be

there are ways around these sort of issues…

For sure. If a seller doesn't want to 'ship or export' to another country, contact the seller if he/she would agree to have it 'picked up / imported' by the buyer.

For anybody interested on status on whats happening the rail was removed from auction, unsold to my knowledge hah 😖😩😂😭