it seems like the housing is made of two pieces and the joint between the two broke apart. the part that extends into the wood broke away from the main housing.. i don't know why it broke in this way, but, i found another one in the exact same condition (broken) on another guitar, and a third that shows signs it is breaking in an identical manner.
there is a shoulder inside the threaded portion that maintains the string post height. a screw holds the gear on the end of the string post and holds the string post in place so the gears mesh together properly

if this one was not broken, i'm not sure how you could remove the little plate on the back of the housing. the shaft that the tuner button is screwed onto will easily slide right out once you have removed the screw and the rest of the components. maybe a small tool could be inserted and pop off the back plate after the shaft is removed. this one was broken so it was not a problem to remove the cover plate.

the main housing still had a glopp of heavy grease in it. (i had already wiped it away before this pic, but that is some of the grease on the paper)

a broken tuner peg mostly just fills up the junk drawer,
but some of these little tiny bits are needed from time to time

maybe you have a tuner with a broken plastic washer, or missing the back cover, or has a bent shaft, or a scuffed up button…
for a Westone junkie, these little things can help an old favorite guitar seem just a little closer to perfect

if anybody needs any of these little bits, just ask

Never seen that, passively wondered about it.  Thanks for the pics!

It will make for secure tuning.
Just nipped up so's not to crush the nylon washer. Too tight is just as bad as too loose.
All your doing is taking up the slack on the worm gear.

Or so tight it cracks the wood!

Yup, see it all the time at the shop, mostly on locking string nuts. They crank the bejeezus out of the screws then wonder why things strip and go out of tune!

I just worked on a '63 reissue Strat at the shop yesterday on which the young owner decided he could "improve" the design.

He swapped out the original machine heads for locking Sperzel's. All good, except he had tightened both the nuts and screws so much I could barely turn the knobs to wind the strings.

I had to take a wrench to the nuts, and it took a bit of grunting to budge the buggers. (No, she did not say that...but she wanted to

Cool pix, always wondered what was going on in there... 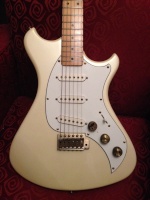