Swapped the magnets from a ferrite/ceramic to a Alnico II in a MMK45 awhile back.
Did a comparison test, man what an improvement!
Much clearer and defined but still with plenty of oomph! A big improvement...

Much better pick attack.
Well worthwhile. Just make sure you put it in the right way.

Here's the new one installed 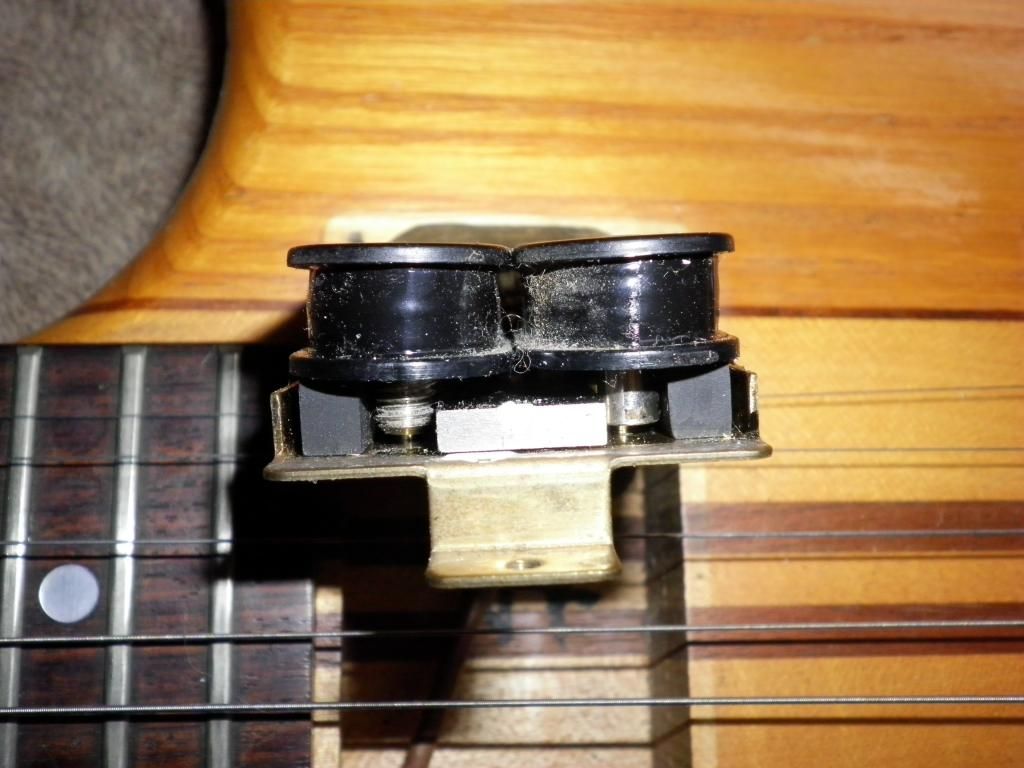 New AII on the left, old magnet and bar on right 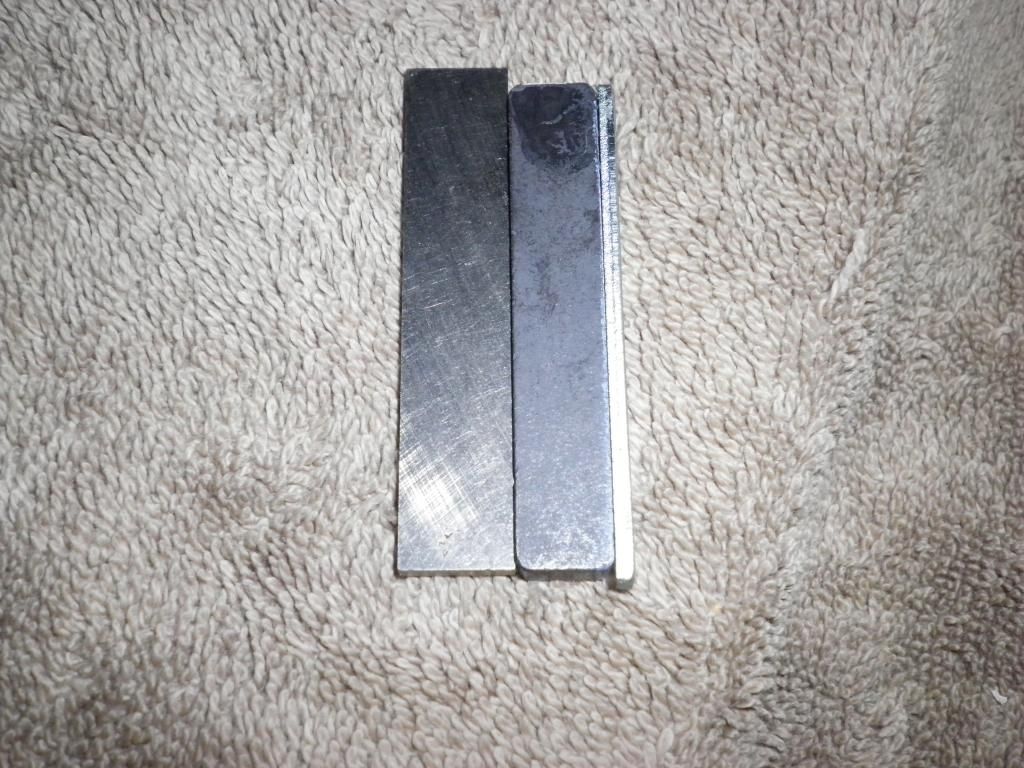 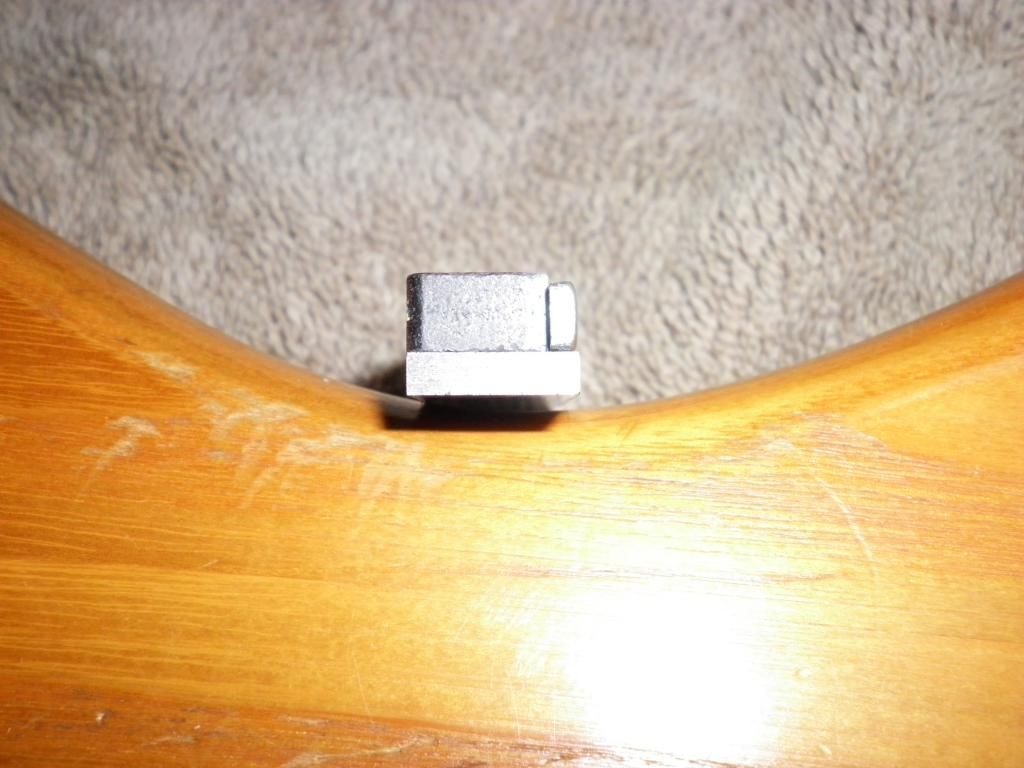 Oh deary me, just when I thought I was done working with pickups!

Excuse my ignorance but how do I know which way round to fit it?

The same orientation as the one you took out.

I usually mark the one coming out with a marker. Tipp-Ex. 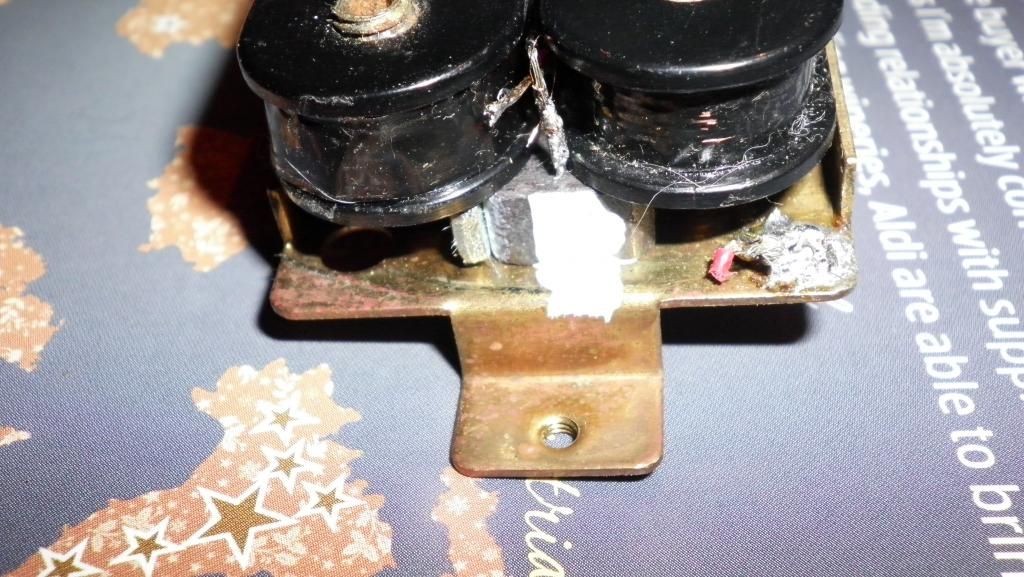 and then with a third magnet find the out N/S etc. and plop it in.
No problem on a single pup but with 2 you will get the 'Peter Green' effect  when on together if your magnets are out of phase.

I also mark the 'old' magnet i.e. MMK 45 etc. otherwise you end up with a pile all stuck together not knowing what is what.

That makes total sense, thanks man!

I should have bought the UK based A II pair when I had the chance, but ordered some from across the pond, don't like those gold artecs I put in the blue thunder, look great but sound meh.
thanks for showing this westbone!

DC resistance is a function of the pickup coil's wire length and strand diameter. Its like water flowing down a drain pipe, the longer and thinner the pipe the slower the water flows.
So the more turns on the coil the wire gets thinner and longer, hence higher resistance.
Changing the magnet will have no effect on the above. AC next?

grogg wrote:DC resistance is a function of the pickup coil's wire length and strand diameter. Its like water flowing down a drain pipe, the longer and thinner the pipe the slower the water flows.
So the more turns on the coil the wire gets thinner and longer, hence higher resistance.
Changing the magnet will have no effect on the above. AC next?

You'll be wearing a chainmail suit next....

This particular  pup is in the neck position.

Just done mine, maybe get a chance to fit them back in the blue thunder today.
I just noticed damian that yours are fitted touching the Base plate whereas I put mine up against the bobbins with spacers below,  would there be any noticeable difference?

Sgt. Vimes wrote:Just done mine, maybe get a chance to fit them back in the blue thunder today.
I just noticed damian that yours are fitted touching the Base plate whereas I put mine up against the bobbins with spacers below,  would there be any noticeable difference?

The base plates none magnetic so shouldn't make too much of a difference. Try it both ways?? spacer on top/bottom.
Whats the spacer made of? wood?

Chords are a lot clearer sounding than a normal MMK45 magnet.

Depending on the amp your using also.


Don't expect it to sound like a completely different pup!
It's only the magnet.

Wood spacers,  and I'm not expecting too much of a difference.
The amp is just a vox vt hybrid which I'm not too happy with and I'm looking for a small valve amp to replace it,  so until then I'm stuck with the muddy mess of the vt...
Not had a chance to install them yet.

Peavey Bravo, a decent little amp if you can find one.

Hmm,  seems to tick all the boxes, ie: fx loop,  size, wattage,  I'll bare that in mind,  thanks!
Also looking at bugera v22, but just outside my price range,  any other suggestions I'm listening ☺

How did you get on with those magnets Vimes?

I'll update this afternoon, I've had a long list of stuff to do that only just got done.
I swapped them over a couple of weeks ag.

Okidoke, all done and back in the blue thunder.
Comparing 2 T1A's original red and my blue, same strings (10-52)fitted within days of each other, same setups and going through the cleanest setting on the amp.
First impressions are:
The A-II magnets allow the poles to get much closer to the strings before that odd modulation effect.
Neck pickup is very definately softer on the wound strings and much less harsh on the unwound, still has plenty of Oomph but needs me to "dig in" to the strings a bit more to get that breakup, tis good .
Bridge pickup is just better all round, the A-II seems to have taken that horrible thick middle shouty tone away making it much clearer and "musical"...bearing in mind I never liked the mmk45 bridge in any guitar (too aggressive and Super Distortiony for me)

I'm impressed, very impressed!  I was not expecting much difference as as I forewarned by Damian, but there's more change, for the better,  than anticipated....all for just a few quid....Champion! Cheers for posting this "mod" Damian, as J.Saville said.."I DO like to fiddle around"

now to compare them with the MMK75's

OK, NOW I get it !
Just bought meself a virtually unused Laney LC15-110
and the mmk's with A II mags in sound unbelievable through this, makes the Vox vt15 sound like a kids toy played under a duvet!
talk about clarity! well defined crunch and just fabulous when tapped! and verry, very LOUD!!!!

Just replying to this post as for some reason there's no cut/paste a link on the forum.

Can always move the pup further from the strings to accommodate your sound to suit at volume.

Thanks guys, I am going to try that.  Probably Aii for the neck and Aiv or Av for the bridge.  I usually like the Av in most guitars.  Has anyone done Av for their bridge pickups?

Excellent article and pics Westbone. Looks like something I may try prior to changing pups.
I notice from a previous post that the old magnets are 58x6x10.5 whereas your new magnet appears to be slimmer and wider (presumably to compensate for the loss of the spacer) Do you recall the actual dimensions of the new magnet?
Does the reduction in thickness create any problems in installation, ie is it more likely to move or rattle?
Your advice would be most welcome.

A drop of evostick type glue to hold it in place. Just a wee drop.

Thanks for your advice Westbone, I'm convinced.
Just ordered a pair of A2 and A4 magnets for comparison purposes, just in case the A2's are a little too soft.
I had considered replacing the pups, but a look at the spaghetti in the control cavity

(all original and pretty tight) convinced me to try the easier option.
I'll report back once they arrive from the UK and the job is done.
BTW excellent and informative site.
Robert

Hey, since this thread appears to have been reborn, here's a great little video comparing ALNICO II, III, IV, V, VIII and a Ceramic-VIII !

Very helpful to hear the differences, and as usual, our Westbone was right on the money with his assessment of A2 as the choice to replace the ceramics in the MMK45!

Oh, and I am particularly happy to hear Darell Braun pronounce it correctly as, AL'-NIK-OH and not AL-NEEK'-OH. If you are calling it the latter, then take yourself to the woodshed and self flagellate until you get it right. The metal is called Nickel, not Neekal.

(and the OH stands for Ohbalt..