Not sure if I should post it here or in the general section, but I nabbed a Westone Villain Modulus Graphite for $225 shipped this morning.

When bored, I do searches on Craigslist, of course, but I've also had some good luck with Music Go Round and Guitar Center. I got the Yellow Challenger from Music Go Round for $200 shipped last week, as I mentioned, and that was well worth it. I've pretty much gotten to the point where I just search for Westones and Vantages, and occasionally Matsumoku.

Well, Wednesday I was bored and as I ran through my searches, I saw a Westone Villain Modulus Graphite as a New Arrival on Guitar Center at Edina, MN.

There was one on Craigslist I was considering. I also had a bid in on the one on eBay. But that one was already at $250, my max was $300, and this one was just $200. At worst, I could decide which one I liked best and sell the other. So I called them and told them I wanted it.

They finally got back with me this morning. The manager said it was in as close to mint condition as you can imagine for a 20-year-old guitar. Electronics all work, no major dings, no fretwear...and of course the neck is straight! He said they couldn't find a comparison price for it at the time they listed it, so they put $200 on it. I must have put in my intent to buy within an hour or two. He said that if I wanted to, I could part it out and get $100-150 for the trem alone, and maybe $500 for just the neck. I told him I had no intent to part it out, it was for my collection and I wanted to keep it for my own playing pleasure. He gave a great sigh of relief, said it was too good a guitar to get parted out.

So how do I attach a picture?

The best way to see it is if you just go to Guitar Center and do a search on "Westone" with no location. Not sure how much longer it will be on their website, however.

I had a sparkly dark red Alvarez Modulous Graphite that I sold (and lost $50 bucks on the whole process!!!

) because the Dan Armstrong pickups were way too quiet, and I need money to fuel the Hamer addiction I had at that time. This one has EMG Select, which I've had on another guitar...they aren't too bad. This one is graphite, which is a cool color, but I'll have to keep my eyes out for a red one, too, because that sparkly dark red is just about my favorite color for a guitar.

If you do the search to see the picture, also note the '90 Spectrum I Deluxe. I've been thinking about that one, too. The Guitar Center picture makes the sunburst finish look pretty cheesy, which is probably a good part of why it hasn't sold. But the sunburst sure looks good in the '90 catalog, what with the flamed maple top: http://www.westone.info/cats/sign/09.html I'm just not sure what I think of the Bendmaster "Floyd Rose" trem. I was very impressed with the single coil sound (especially in the quack positions) on the Challenger, but those were Stylist pickups (premium?) that this guitar probably does not have. So I haven't pulled the trigger yet...

Great score once again Brain, sounds like it'll be a good one!

Save the images to my computer.
Go to our beloved forums, either post a reply or start a new thread.
See the bar of icons? Click the one that looks like a poloroid picture with a computer disk, it'll say "Host and Image" when you rest your cursor on it. So click it.
It brings up a window for "Upload your image". Click "Browse..."
Find your photo, double click it, and then click the "Host it" button.
Click the copy button that's to the right of "Image:" option.
Go back to your posting, right click and paste.
Click preview at the bottom to ensure that it's there.
Repeat for multiple photos.
When satisfied, click "Send" and wait for it to show you your completed post.

This is real easy and quick to do, just sounds complicated. Takes me about 10 seconds to do. So get your pics up on here!

NUTS!!! I was down to "the cities" (Minnesotan for Minneapolis, St. Paul & surrounding suburbs) about 2 weeks ago and was in that very store. 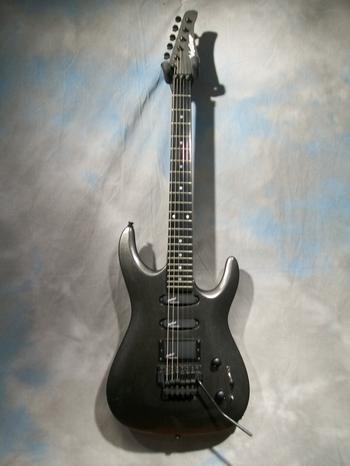 Alright! She looks mean, I like it a lot.

Let us know how she sounds.

I do think the manager was a little exaggerating on its value.
If you could get $500 for just the neck on eBay, then the Villain Graphite that was on eBay last week would have gone for way more than $310.
And I wouldn't have lost money 2 years ago on my Alvarez Graphite.
And the Villain Graphite on Craigslist where they are asking for $400 wouldn't still be available more than month later.

But the eBay price of $310 for a damaged guitar indicates this one is at least $100, maybe $150 underpriced. But it should be a keeper. If I don't bond with it, I'll offer it up here first.

Brian, if you're still around can you please update us with a review of your Villain?

I just purchased a 1990 Villain Graphite today from Reverb  for $325 + Shipping. It was made in Korea & has the "signature" style logo.  See below pics of mine screenshoted from the reverb ad:

The Chad wrote:Hey that’s a deal!  How’s the neck feel?

I thought it was priced right. The seller shipped it today but I'll update you on Tuesday when it arrives.

You realise that this thread is 10 years old, right?!

corsair wrote:You realise that this thread is 10 years old, right?!

HAHA! Yup but the OP will receive an email alert which might bring him back to the forum.

The Chad wrote:Hey that’s a deal!  How’s the neck feel?

Have a few Sid Poole Status Graphite models if your interested.

Have a few Sid Poole Status Graphite models if your interested.

I probably couldn't afford to buy one but would love to see one if you don't mind posting a few pictures?

What's your opinion on how it plays versus MIJ Westones?

There are no Poole graphite Westone's

There are no Poole graphite Westone's

Understood, this info page about Sid Poole's use of Status Graphite's manufacturing facilities led me to assume that Graphite may have been in Sid's materials.  I assumed wrongly:

"In 1998 FCN decided to revive the name and collaborated with the well respected luthier Sid Poole and used the manufacturing facilities of Status Graphite to make four new models. Status Graphite were an English manufacturer predominantly known for the production of Graphite neck headless bass guitars."

You can read all about them here.

Westone wrote:. . .
"In 1998 FCN decided to revive the name and collaborated with the well respected luthier Sid Poole and used the manufacturing facilities of Status Graphite to make four new models. Status Graphite were an English manufacturer predominantly known for the production of Graphite neck headless bass guitars."

Westone, if you need to use a quote it's better to use the 'Quote' option in the menu bar.
No need to use large font and italics!
As mentioned on another post, it makes it annoying to read, especially for mobile users.

Also, there is no need to give an instruction to "copy & paste" a hyperlink. There is an 'insert a link' option in the menu for that as well.
Thanks

Barry wrote:
Westone, if you need to use a quote it's better to use the 'Quote' option in the menu bar.
No need to use large font and italics!
As mentioned on another post, it makes it annoying to read, especially for mobile users.

Also, there is no need to give an instruction to "copy & paste" a hyperlink. There is an 'insert a link' option in the menu for that as well.

The forum settings don't allow new users to use links for 7 days but tomorrow I will be allowed to use links.

I watched all your videos Barry about waiting 10 seconds before responding to an attack, "Acting dumb," to difuse a relationship dispute, etc. Brilliant & excellent material!

But why not take your videos to heart and choose flexibility and understanding for new members instead of making a big deal about the way someone quotes something? The way they use italics?

There are only a few active users here so wouldn't it seem a better policy to be accommodating instead of chasing people away?

I do have flexibility and understanding when it comes to new members, that's why I try to help them out when attempting to navigate the Forums. And in your case, I certainly have waited much longer than 10 seconds before responding. On more than one occasion.

It's not an attempt to chase anyone away but simply do the job of an administrator, to gently remind folks that there are tools and rules that we try to live by in order to maintain a usable and informative site. That's the reason you came here in the first place, right?

We appreciate your enthusiasm for Westone and the support you have been given, but perhaps it is you who needs to wait 10 seconds (or in your case 7 days to learn your way around) before making accusations and doing whatever you feel like?

My comments stand and are relevant here. It's called Forum etiquette and 99% of new members to date have had no problem accepting either advice or the rules.

Westone wrote:...There are only a few active users here so wouldn't it seem a better policy to be accommodating instead of chasing people away?

You may think the number of active users is small, but again, you are new here and obviously have never looked at the number of people online! Here's a sample of today's activity. It's not all about you.