So, we're all familiar with the problems with the Bendmaster FT and replacing the "string claws" (as they've been called here recently) that hold the ball end. When you've got a broken one you can loop the string around and through the ball end, but you end up loosing the fine tuning and it's kind of a pain in the ass to get right. Recently I found a bridge similar to the Bendmaster FT, so I took apart both bridges as a first step to see what I could do with them. Follow this link for the full story if you wish

It had been about 5 years since the last time I disassembled the BM, and forgot that one of my "string claws" was different from the others, meaning that it was a replacement! 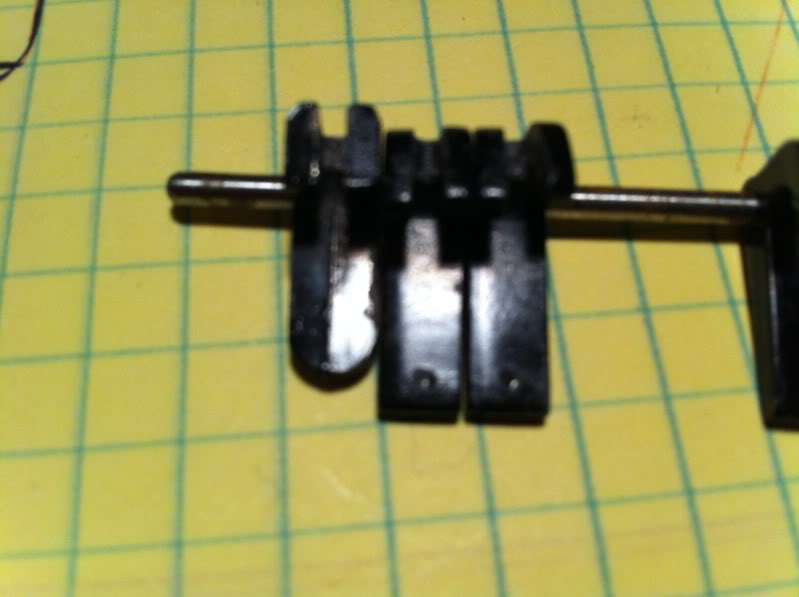 I restarted my search for a replacement. I found lots of bridges that use "string claws": Gibson TP-6 and various Schaller models are out there, but can't find any parts for them. Eventually I started looking at kahler trems and found a link to a site called wammi world. After doing some reading I found a link for this part - the Standard Cam String Hook!.

I compared the one that's been on my Low E for as long as I've owned the trem, and I'm sure that it's the same thing.
here's a shot of the westone version on top and the kahler version on bottom 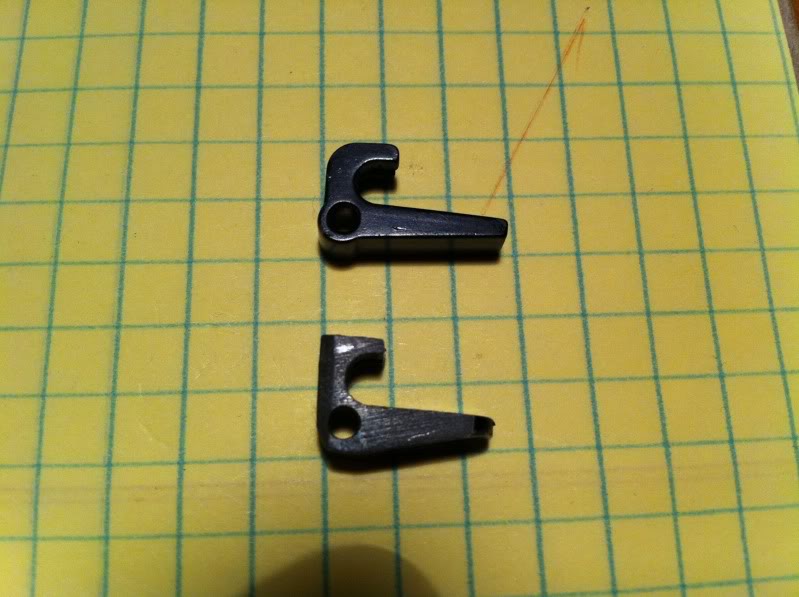 So you can obviously tell that the Kahler hook is a bit shorter. Good news is that it's long enough for it to make contact with the end of the fine tuner adjustment screw and function. This next shot came out a bit blurry, but the Kahler hook is on the high E (the rounded one) next to a westone one on the B. 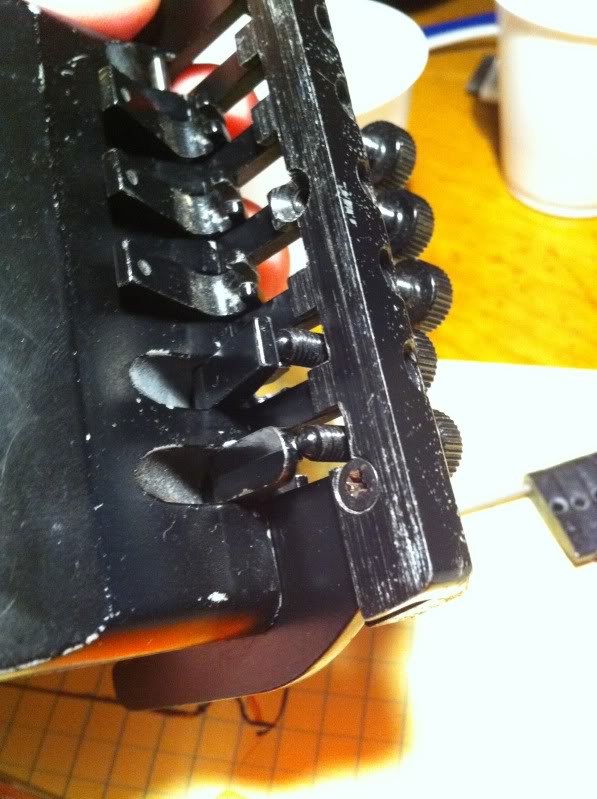 If it weren't for the fact that the kahler hook has been on my guitar and functioning for the past 8 years, I might be concerned about it's length. The fact is that it works. Keep in mind that I've never used the whammy on my Westone, and I don't use the fine tuners much either ... as always your mileage may vary. But I can tell you one thing for sure, even if you remove the fine tuner screw the kahler will work and hold the ball end of the string.

Wammi World appears to ship worldwide, but I've also found a European supplier as well -
Banzai Music out of Germany (NOTE: the part number from banzai is the same as the one from wammi world except it has an 'X' after it ... not sure if that's significant or not. Both parts look the same from the pictures.)

I plan on ordering a couple in the morning. I wouldn't be completely surprised if I had to grab my drill and ream the hole on the hook out a bit, but I'm hoping that won't be necessary. I'll keep everyone posted.

UPDATE!
I just got mine in, and it looks like I'll have to get out a couple of small files and make them just the slightest bit narrower to get them to work. Less than a 1/64th of an inch, I'm sure. I'd be more precise, but I don't own dial calipers.

You, sir, are a bottler; well bloody done!! I, too, shall order a couple.... just in case, you understand!

Thank you for the research done, mate.... you've made my Xmas just that wee bit better!!

Never been called a bottler before. That's absolutely bonzer.

I've been in contact with them and there are a selection of small bits heading my way as we speak...

Don't have this problem (or trem...yet) but it's nice to know that there's a potential solution for those who are tearing their hair out!
Well done and thanks for the research on this!

Always wondered what FT stands for. Friggin' Trash.
Seems a lot of folks have the same problem.
Looks like a good fix 3m.

Westbone wrote:Always wondered what FT stands for. Friggin' Trash.
Seems a lot of folks have the same problem.
Looks like a good fix 3m.

Barry wrote:And if you decide to replace the whole thing: Replacement

doh! wish I woulda logged in a few weeks ago. I'll have to start a new epic post soon …

I ordered 4 of these, after reading this thread, and they're actually more like 3/64 too wide.  If I had known that, I think I would have saved myself some trouble and tried to get a whole new bridge like Barry linked to.

I may need a better file,  or maybe some kind of power tool.  After many hours of physical effort I finally got one of the hooks filed down where it's usable.  I gripped the hook in my fingers and it would get hot over time and burn my fingers.  I tried wearing gloves but the gloves would rub against the file.  I tried holding the hook in vice grips, but I ended up breaking the hook.

The paint takes some time to file through, and then there is a hard metal coating kind of like chrome, followed by another hard coating that's sort of a brass color.  The chrome like coating takes the most time to file through.  It's a pita. After those three coatings are gone, the  hook is considerably easier to file.  I wonder if removing those coatings compromises the structural integrity of the hook.  Also, the back edge of the hook sits further back than the originals, which prevents the hook from reclining all the way back.

Strewth!! You're keen; I held mine against the side of the grinding wheel on my bench grinders' fine stone held in the (soft) jaws of a pair of vice grips: had the 1.2mm whacked off in very short order, without hot fingies!!

Well, I have a nice set of digital calipers now, so I'll have to measure the ones that I got. Considering that your filing experience sounds much different than mine it makes me wonder if they changed the part somehow. It's been a while, but I don't recall having that much of an issue. Maybe, as you suggested, your file is too dull.

corsair wrote:Strewth!! You're keen; I held mine against the side of the grinding wheel on my bench grinders' fine stone held in the (soft) jaws of a pair of vice grips: had the 1.2mm whacked off in very short order, without hot fingies!!

You're right, though; they're not perfect but they are the only way of easily getting an FT bridge up and running!!

How do you grip them in the vice grips?  I either gripped mine in the wrong location, or too tight.

corsair wrote:I lined the jaws with leather cut from an old belt and held it so that 1 side was available to the grinding wheel.

Thanks.  Where are you actually applying the grip?  I had mine on the bend and the forks, which is how I broke one side of the forks.  I had trouble gripping to the other surfaces because they are so uneven.

For reference, I'm including a picture of the hook with with labels I made up. 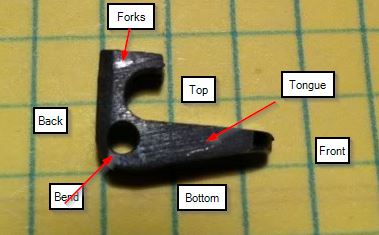 OK ... you don't need to grip the thing REAL tight; just tight enough for it not to move when placed lightly against the side - side, not the normal grinding face!!! - of your bench grinder or Dremel-in-a-vice setup!!

I think, from rather shonky memory, that I used a set of welders grips with the widened jaws, that I had ground a little to make it fit square. The leather cushions and helps hold the claw and I recall it didn't take long to remove the metal. I think I polished the raw edges with a warding file set in the vice and then Autosol cream.
_________________
".... and on the eighth day, God created New Zealanders.

OK, from measuring at the bend with my digital calipers

So, I stand corrected. Not less than 1/64th, but more like 1.5/64th or 3/128th if proper fractions are your thing. If the ones you got are indeed 3/64ths wider, than that must mean that either quality control sucks or they are getting 'em from a different manufacturer that that isn't making them to the same spec as the ones that I got.

I used a belt sander, and Held the part with a metal rod that fit in the hole, and a wooden paint stirring stick with a notch taken out.  Probably not the best control.  Didn't get the most even edges, but worked alright. I forgot to measure it before grinding.