DO NOT try this at home!

DO NOT try this at home!

And the DUMB ASS AWARD of the week has to go to . . . the guy who decided to "fix" this very nice old Pan (Aria) acoustic guitar which is for sale locally. He did a lovely job of re-fretting the neck, and re-gluing the bridge.

Then he did this: 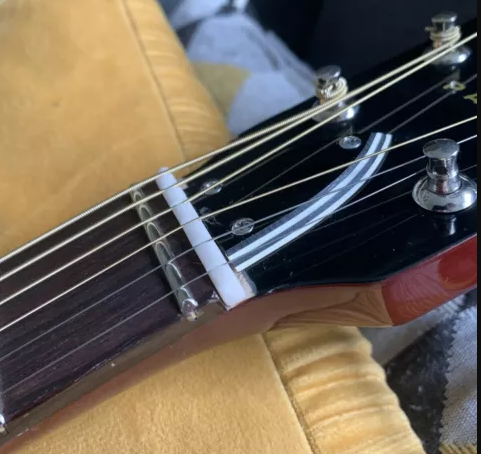 He installed a full height nut, and to accommodate it he removed a chunk of head stock real estate AND eliminated the string break angle over the fret!

Turned a zero fret guitar into a zero volume guitar with sloppy strings, and severely weakened the head stock.

I contacted the seller to express my 2 cents worth of concern just in case he wasn't the one who did the work.
Turns out he wasn't.

I received a reply, not from him, but from the tech in Toronto who did the work for him! Here's what he said:

I think the photo may be a little bit of an illusion because the strings do currently rest on the zero fret and the nut slots are filed accordingly to let that happen. The zero fret is .018 higher than the first fret to enable good playability at the first.

The sanding done at the nut was done to accommodate a TUSQ nut for a customer which is wider than the original. Although it is redundant to install a new nut because the nut in this case is only there to hold the strings in place, the customer thought the Tusq nut would sound better, and sometimes we can’t argue with that.
The sanding done was only to take down the finish to the wood for a flat surface and the total depth would be about .016 which I don’t think alters the structural integrity of the headstock.

He sounds like a decent chap who as mentioned earlier did a nice job on everything else. When I mentioned that some customers needed some education in guitar physics and that the whole exercise was a waste of money, he said in a second message that, "It’s a 10$ lesson in too much forum reading in this case."

Even though he apparently did a competent job I still think it was a stupid thing to do. If I was still in the business I would have politely refused to do that.