Hi guys, I hope everyone is alright at this unearthly time of the morning.
Im really hoping you can throw me a lifeline as im out of ideas now.
I have a black Westone Spectrum ST which I bought in about 1987 from
a guitar shop which also traded in second hand guitars. I bought mine
for bang on £100. I couldn't get my cash out fast enough.
Anyway, over the the last thirty or so years its had such a hammering I
thought I'd treat it to a damn good service. All was going well until i was
re-assembling everything ready to set it back up. Thats when realised to
my horror that the truss rod had reached the end of its adjustment. This
is where i'm desperately hoping one of you guys will come in and pass onto
me any pearls of wisdom you have to help me. Im gutted. Im trying to track
down another, "project," Spectrum ST and use it for parts, but as I'm sure your
all only too aware, it's proving very hard to find one. Any advice would be
really, really appreciated.


All the best everyone, 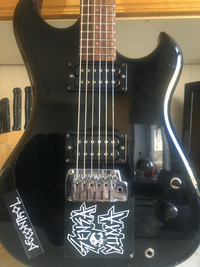 Wow, out of adjustment, eh? Bummer!

I've not heard of that happening on a Westone before, but it does happen to guitars. Has the neck been subjected to unusual humidity or heat perchance?

I would hate for you to trash that neck, the Spectrum necks are just wonderfully comfortable.
If the neck is not too badly bowed, the usual remedy is to add some washers to the rod to try and regain some purchase. You would not try that if the bow is excessive however.

StewMac makes tools (of course they do!) which addresses these problems, but you need to be rich to buy 'em!

However they did make a post to give you an idea of how you can do what I suggested above: LINK
Have fun and good luck!
_________________
"A little song. A little dance. A little seltzer down your pants." -Chuckles the Clown

hello mate, sorry to be replying so late after you were so kind to reply to my S.O.S.
Im totally with you and will not disregard my ST neck. I was wondering if maybe it might just be really stiff and could do with a bit of lube. I will give you the history me and my ST have shared. I bought it as I stated in about 1987 and for the next 20 odd years I was squatting, travelling and generally not really having a (as they say) fixed abode. Apart from my leather jacket its the only thing I have retained since I was young. Anyway, over the last 30 odd years I've never touched the truss rod cos back then I didn't even know what it did or even that it existed. What im trying to say is that im possitive that as I bought the ST in 1987 and it was built in 1985, and I've never messed with it, the truss rod surely can't have been over tightened? so could you advise me on an idea I have? I was thinking of popping a little oil down into the nut at the end of the rod and over time and slowly, completely loosening the truss rod and then slowly and over time re-tightening it again. I know im clutching at straws but surely it can't have been over tightened within two years or so? What else can it be? I have gone through the set up procedure with the bridge, saddles and nut but im still getting buzz at certain frets and cannot tune properly with intonation. Woe is me.

Lubrication is a good idea, I should have mentioned that first.

Before you try to tighten the nut it is also good practice to first of all try to loosen it. If moves it's not frozen and likely doesn't need lube either. But if there is no advance, then remove or back off the nut and add some lubrication.

I would caution using oil however. Oil can seep into the surrounding wood and weaken it. Stay with something like silicone, lithium grease or petroleum jelly which will cling to the threads. You don't want to be spraying liquid all over the place!

Hi Barry, thank you so much for your reply again. It's really appreciated. So as a plan forward with my ST truss rod problem, the rod does loosen (albeit very stiffly and creakily). So do you think it would be an idea to gently keep loosening it over time and then tweak it back maybe a 1/4 to 1/2 turns at a time to see if it will settle down where I need it to be for the relief? Maybe leaving it to settle for a few hours between tweaks to give the neck time to move and settle down again. The poor thing has been subjected to various places of storage over its early life but, in true Westone style the neck is straight and true, very supple, smooth and a diamond to play. (Fretbuzz aside). As it was only a couple of years old when I bought it and I have never adjusted the truss rod, it surely can't have maxed out in that time? Unless of course I was really unlucky and the previous owner thought OOOHHH there's something in the neck! I wonder what would happen if I just keep twisting it around? (PLEASE GOD NOOOOO). Must just be stiff? (I hope). Anyway, any  more thoughts from you would be really appreciated. I do have a Westbury Standard and a Gibson acoustic to play with while im giving the ST it's TLC though thankfully. Again, I thank you so much for your input. I'd truly love to bring the ST round to you for you to see and chew the Westone cud but, as much as I love travelling, I live in the UK and 3476 (ish) miles is a bit out of my justifiable fuel range.

. P.S. I hope it's worked and it's not the best pic ever taken, however, I hope attached is I photo of my baby.
All the best Barry.
Regards, Shplarf. 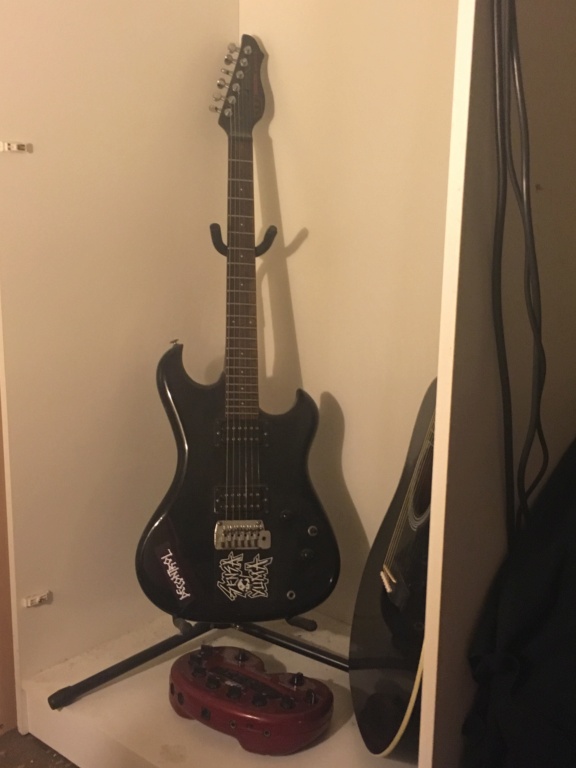 Hi again Barry, well, your a dark horse aren't you!
Iv'e not long ambled across your link to your band,Getback. In for a penny I thought and followed the link to your Getback site. I have to be honest, I really enjoyed it. Im a punk at heart but have very eclectic taste in music.
I'll tell you what I really enjoyed was the setup and mastering of the tracks. I used to be a studio engineer and I really liked the space between the guitars. So many musicians try to fill tracks too much and take all the breathing space away. I don't know if it was you guys or the producer/engineer on how you were to lay the tracks down but, bravo! a breath of fresh air. very well played and mastered. Love the sound on the guitars. (you could have squeezed just a bit of your Westone on it though, or did I miss it?). Top track? easy, Mustang Sally. You should be proud of that mate. How many people get to produce a rock n roll album in their lifetimes? Is there a download link anywhere mate as I'd like to hear it thru my other system. Nice one Barry.

Hey thanks for the kind words, much appreciated.

I can't take credit for the engineering, we had a young fella in a small studio doing the work. Aside from a few of my two-cents worth "suggestions" he did all the set up and the mixing. Did a great job I think too!

I was the rhythm guy in the band as well as the singer, so it was primarily my job to set the pace and 'drive' the band in concert with the bass and drums. I did manage to get in a few licks now and then though!

I played the Spectrum ST on several of the tracks, along with my trusty Gibson ES330 and an Ovation 1983 Collectors Edition. The other two guitar players were Strat and Schecter guys. Sadly they have both passed away, the last one, my best friend and musical partner for over 50 years this past October.

Peter (the engineer) recorded us off the floor with my setting the numbers up much as we did it live, then he threw away the vocals and had me re-record them. Sneaky Pete also removed most of my guitar playing too but I can still be heard on many of the tracks!

He wanted me to set the pace and energy for the songs to cue in the band. He also realized that when you're both playing and singing, that sometimes the quality of one or the other suffers. He was right.

The ego took a small hit but I had two great players to lean on and they played much better than I did.

Very flattering but no, sorry, I did not provide download links. I never envisioned anyone wanting to do that, you are the first to ask! You could I suppose record the songs directly off the web page if you're so inclined.

First of all loosen the string tension.
Then I think you're OK to loosen the nut at one go, actually, remove it completely. Lube the threads and reinstall it.

Maybe leaving it to settle for a few hours between tweaks to give the neck time to move and settle down again.

That's the right idea. When you are getting resistance you do not want force anything.
Tighten in small turns 1/8 to 1/4 then leave it rest for several hours and check the relief in the neck.
Rinse. Repeat.

...I have never adjusted the truss rod

I have an '85 ST, same deal, never needed adjustment

...I'd truly love to bring the ST round to you for you to see and chew the Westone cud...

That would be fun matey. But even without this bloody CoVid poop it would be a long tiring swim eh?