15 years ago I remember working out how to wire in my PG pickup but then I had a fully wired guitar in place to work it all out. Right now I only have the main wiring in place but with no traces of the old pickups (except the SC which I recently made note of)

Now I have both the bridge and the neck pickup to wire in and I am kinda going at it blind.
http://www.westone.info/wiring/spectrum3/index.html is useful but the wires from the two Seymour Duncans are different . There is black, green, red, white and bare.
I am just a little confused as what diagram to follow as there is very little information on the net with this particular setup. HB/SC/HB with two tone controls and one volume. 1x coil tap and 1x phase pot. 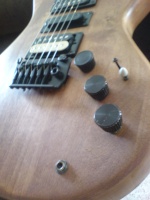 If you haven't already looked, I suggest you check out http://www.seymourduncan.com/support/wiring-diagrams/.

I couldn't see the exact diagram you need but they do a H/S/H schematic without the switches, and do separate diagrams on wiring switches for coil split and phase options. If your handy with a soldering iron you might be able to piece it together.

Also it sometimes helps if you use these to make your own complete sketch to work from and give you a feel for it.

The diagrams are in the humbucker section, just choose the diagram then hit submit. You can save and print them to keep for future reference.

Hi thanks for the link. I feel i need alot more knowledge on this before I can work out what to do.
My thoughts at the moment are to wire the pots so that the humbuckers can switch between series and parallel.
http://www.1728.com/guitar.htm Helpful site

I guess I do this with the two pull pots, one for each HB now I need to work out where to send the - + of each pot

There is two ways that I know of when taking the "+" lead from the switch.

It usually either goes straight to the controls (volume or tone) or it will go to the selector switch first.Most guitars with humbuckers seem to use the second method.

On a standard guitar, the "+" leads from the pick-ups go straight to the selector switch then the output goes to the rest of the control circuit. You can put your extra switch (coil split, series/parallel, phase reverse) into the leads between the pick-ups and the selector.

I've tried series/parallel switching myself and unless the pick-ups have a high output, when the coils are switched to parallel the volume drops quite a lot. In fact it's output ended up at a quarter of the humbucker's complete output. A JB pick-up runs about 16K so would switch down to around 4K and still sound OK. The problem is with the vintage output pick-ups (Jazz, 59, etc), these are around 8K which is only going to leave 2K or less.

I personally didn't like the sound I got but others out there think this type of switching is excellent, so it's best you give it a test for yourself and see what you think of it. It's not going to be a massive problem if you need to rewire the switches later.

Thanks for the advice. Half of me is thinking to try it for myself as part of a learning curve and the other half is thinking I should just wire it in normally. But then there is a little red guy on my shoulder telling me to try wiring up so that I can cut out a coil when the switch is up. Any experience on this setup?

Yes I understand you get a large output reduction but from what I have read you can get a very nice bright clean sound by doing a series / parrallel switch or a coil cut wire. I really am very novice at this and I am pretty sure I will follow the path and advice of an expert. The ultimate aim for this guitar is to get as much out of it as possible. It will be used for some home recording and will be used mainly for clean and classic tones. My giging days are over I am pretty sure of this for now, at least for the near future.

Heres what I have so far:

I am not at my own PC atm

Is this diagram correct?
I am wondering how to get a tone control from the single coil? I am also wondering if the blue or the white is the postive from the sc pu. Theres only two wires on this and its the standard westone pu.

I checked the Spectrum III wiring diagram here http://www.westone.info/wiring/spectrum3/index.html. On the original SC pick-up the white lead is "+" and blue goes to ground (earth).

As for wiring a tone pot to the single coil, on the original setup the middle SC and neck HB share a single tone pot (tone 1 in the diagram). Unfortunately this is always a compromise when you have 3 pick-ups an only 2 tones to work them.

One idea could be to put both HB pick-ups onto one tone pot leaving the SC with a tone pot to it's self. Since both HB's cannot be switched on an the same time, when using the in between settings (neck/middle or middle/bridge) the chosen HB and the SC will both have independent tones.

By the way, I myself am no expert at this sort of thing, I've just learnt from my own mistakes (plenty of them!). Best thing is to hunt out guitar building and wiring books, and of course searching the good old interwebnet. I've got a book collection I always use for reference because my fragile brain cells won't hold all the info in!

I pushed my myself to breaking point with my Thunder I when I decided to fit it with a pair of Seymour Duncan P-Rail pick-ups. I like to try and get as many sounds from one guitar as humanly possible. These pick-ups are humbuckers made up of a standard blade single coil and a P90 coil, three pick-ups in one!. And with a pair.............well..........it would be rude not to

.
The guitar now has two 3 way mini toggle switches, one for each pick-up. These switch between the rail, full HB, and P90 on each pick-up. Just to complicate things further I added two push/pull pots. One puts the bridge pick-up (either or both of the coils) out of phase with the neck on the middle position. The other switch puts both neck and bridge pick-ups in series with one another when in the middle position, this is why Danelectro's sound louder on the middle position. Most other two pick-up guitars run both of them in parallel when used together.
As you can imagine this took a while to plan and even longer to complete. I broke all of my best crayons scribbling it down and one nervous breakdown later it actually seems to work

. It's complete overkill and even I don't clearly understand how or why it works but I think I got away it in the end, it's just a matter of joining the dots on the different circuit diagrams I used. I don't think I'll do it again in a hurry but it's good to know I managed to finish it and get a complete guitar out of it.

DuoFuzz wrote:I broke all of my best crayons scribbling it down and one nervous breakdown later it actually seems to work

Win!! Good work, though - guitar wiring is a bit of a mystery to me even though I've done a few; mind you I've never really tried doing what you've done here - that's a bit beyond me!! Oh, all right... a lot beyond me!

Thanks
Well I wired it up as per my diagram and........ budabing! It works and dam it sounds good! I am highly impressed at the sounds coming out of my amp right now I just cant express it enough!
If only I had realized what a gem I had sitting in my loft all these years!
Thanks for the help!

Gonna spend all day playing this guitar now tho

Go for it mate and reap the rewards of all your hard efforts - it was worth it in the long run!

I can't wait to see the photos and I feel that there might just be a tincey wincey little bit of me in that guitar!

. Isn't it great when you get rewarded with that first sound from your finished guitar. Makes all the swearing and questioning gods abilities all worthwhile doesn't it !

Thanks to you I'm now getting the urge to get stuck back into my one of my own projects again, thanks for that!
(where's me tablets

I bought a Pantera X-300 a few years ago in an effort to obtain a Westone UBC pickup. My previous attempt, a Spectrum FX, ended up not having UBC pickups in it when I got it. I had wanted to check out the UBC as it seemed like a good idea. Well, the X-300 had a dead coil in its UBC, so I had struck out twice.

He did it one better than the UBC.

With the P-Rails, you get single coil, P-90, and humbucker tones all in one. I've been wanting to try one out but haven't done so yet.