Never seen a Thunder II with a bolt on neck...and does that sticker stay Made in Korea? 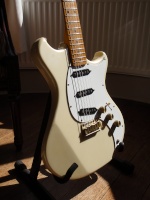 My guess is that it's a strange early Korean prototype.
The neck wood looks odd, and there's no serial number, I've not seen a thunder II like this either, maybe it's just a T2 trussrod cover on a weird mix of bits?


EDIT------- after looking at it some more I have another theory:


it's the body of a Westone Thunder III Bass Version 2 that's had a neck break, so they got a bolt on neck and routed out a new neck pocket, (all the pick ups and switches etc are in the same place as on a version 2) then they sprayed it up in metallic black and away you go!

Dodgy. Surely it can't be from uncle Mats if it's made in Korea, clearly more research required by the vendor. Good theory Clive.

The seller has done a bit more research and suggested, hope Sarge is sitting down at this point, that it might be a rare prototype Matsumoku made Thunder II from 1989....and priced accordingly.
A bit more research required methinks.

I guess that when he was bidding on his own item, under a different username, it didn't drive the price up enough

Or maybe I am just being cynical ...

Kill it with fire! One thing's for sure, I won't be buying it, my real Thunder II's will laugh and bully it until it wanders off into the woods to die.

From what we were told by Mr Tom Presley at last years Electrafest all the parts in stock when Uncle Matt closed up shop in Japan were transferred to the factories in Korea and assembled there. Japanese made parts assembled in Korea at the Korean startup. Hope this helps.

Look at the late Korean Thunder IA 6 string. It will all become clear

2 pups = Thunder II in their eyes.

The seller states the sticker reads 'Made in Korea'