this is the ultimate hot-rodded guitar- Mr Horsepower
("just listen to the sustain" "i can't hear anything" "well, you could, if it was playing")

turn it up to 11 and then watch this

"You can go out for a bite and that one'll still be goin'!" 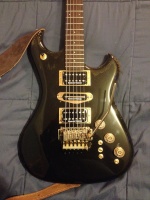 I have many happy memories of sitting around chillin with mates watching the original Tap movie on VHS. I think we almost wore the bloody tape out, we watched it that much and in fact some of the cliché's such as the over eager girlfriend wanting to manage the band was a warning from beyond to us wanna bee's, as was never playing military establishments or supporting puppet shows.

Nigel (Jeff) was the man, his inept nievety made cheap trick look like amateur hour and although without the internet that was where it began and ended it's good to see the excess's of the ultimate guitar incarnation live on amid the physical parameters of a playable scale length and enough world resources to wire the damn thing up

Friggin' great band.
And they did it all acoustically!