Hello peeps.
I wonder if I may ask a few questions? These are mainly to do with the Prestige 250.

How many Version 1 250's were made?
Why does the metalwork tarnish so badly?
What string gauge were they originally supplied with?
Was there a factory recommended relief specification?

And the Bonus Question:

Which Westone(s) did Dave Brock (of Hawkwind) play?


Sorry for all of this trivia, but these are questions that have crossed my mind in the last couple of days!

Cheers for any info!!! 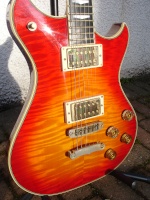 As I understand it Dave Brock plays a Spectrum LX with a custom paint job.

supercharger wrote:How many Version 1 250's were made?
Why does the metalwork tarnish so badly?
What string gauge were they originally supplied with?
Was there a factory recommended relief specification?

In order
Dunno
At a guess very thin gold plating that has a porocity allowing sweat etc to get through and corrode the low grade metal underneath then pop the finish. A common issue with this type of plating.
Does it matter.
Ditto

the good doctor with his spectrum LX and later a Paduak.

Thanks for the replies gents.

Interesting to see Mr. Brock with his custom paintwork jobs.  I like the 'Warrior on the edge of time' especially.  I've seen Hawkwind more times than I have seen any other band (they were my first ever gig in the Sophia Gardens, Cardiff, in 1979).  Just saw them a few weeks ago in Birstol. Wonderful!

Hi grogg, let's hope your plating job is a lot thicker than the original then

As far as the bonus question goes I believe it was a Westone Paduak and most probably the Paduak II if I remember well, although I'm not very familiar with the music of Hawkind it was a very nice guitar with an unusual shape and wood.

How many versions? Don't know but there seems to be a Prestige II (PR 250) according to the owner of the first Westone info site.
I don't think anybody so far reported owning one here.

Gauges of strings are imo personal preferences and don't count at all. And about the last question.... I simply fail to understand what it beholds (?). That said, I'm not a native speaker, so it might be just me.

I think the Prestige's are much nicer than the Paduak though, which was a very versatile guitar in itself, but even though my Paduak II got stolen and probably will never be retrieved it's not on par construction wise at least. Prestiges are in their own leak if you ask me and compare much more to Les Paul's imho. If they aimed at that they did a pretty good job because they look much better too, and that doubles the fun of course.

Hi Jim.
Interesting stuff, thanks!
I'll have to look into the Paduak models. I have much to learn!

The 4th question was with regard to neck relief (i.e. truss rod adjustment).  I know many manufacturers publish recommended setting etc etc so i had wondered what they were for the Prestige. I do realise that string gauge and neck setup are down to the individual but it is isnteresting to try and gleam as much info as possible!

When I got my Prestige the strings were completely corroded and the neck was just past flat, i.e. probably very slight back bow.  After adjustment to about 0.010" relief with new strings and a bridge adjustment it played much better

In terms of relief, I do all my guitars the same way.

I tune them to concert pitch, lay a steel straight edge on the fret board and check for daylight between the frets and the straight edge. I use both my eye and feeler gauge.

I generally adjust until the neck is flat. I double check that the neck is not bowed upwards by trying to rock the straight edge along its length.

I then use short straight edges to rock over 3 frets and level out any high frets.

If I get slight buzzing at the first fret I then may loosen the truss rod a tiny bit to introduce slight relief.