so, so sad to say goodbye... RIP Kevin Ayers

so, so sad to say goodbye... RIP Kevin Ayers

i just found out that one of my all-time favorite artists has passed away.

i got a chance to talk with him the one time i saw him perform. it was at a small club in Baltimore. during the opening act, Kevin was sitting alone at a table, watching, listening. i think most people there did not realize it was him. i had brought along my album collection in hopes i would have a chance to get them signed. so i took the opportunity, and i just went over and asked him if i could sit down. he was very kind, and even a little bit shy. i sat and talked with him for nearly half an hour, while he signed my albums and told me stories of the days gone by. it was just wonderful, he was so relaxed and unpretentious. he said he was a bit nervous, because he was used to playing with a band, but this was a solo show. hard for me to imagine someone so talented, with so much experience over the years, would feel nervous about performing. but he was not the brash egotist so many artists are. he was very reserved, considering his immense influence on so many people, and his association with some of the most important and creative artists of his time.


truly, one of the most beautiful people i have ever come across. he was gentle and kind and loving and generous.
immensely talented, a gifted songwriter and a voice like no other, with the smoothest baritone, and most romantic singing voice i have ever heard.
and how could anyone resist his sweetness?

May i
"i just came in off the street,
looking for a place to eat,
i spot a small cafe,
i see a girl, and then i say,
May I sit and stare at you, for a while
I'd like the company of your smile...."

and here is a toon from the later years...
Champagne and Valium
"Champagne and valium, half-hearted kisses,
oh lord wont you tell me what kind of breakfast this is?
god said, just cool it boy, you sure got your nerve
you've already had much more than you deserve
why don't you shut your mouth and go home, boy!...."

and a few of my albums he signed

thanks Kevin, the world is a better place because you were here.
you will be missed
RIP

Re: so, so sad to say goodbye... RIP Kevin Ayers

Sad to hear we lost Kevin. He was truly unique and a visionary. 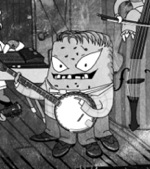