I wanna play the blues, however, I'm flat broke and unemployed. I'm finding out what kind of course should I apply which will also be suitable for my guitar lessons...please advice...thanks!!

Just play it by ear.. 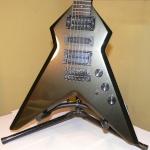 BTW guitarissts... sounds like you have reason to play the blues. I would also suggest you not try to do more than 30-minutes at a time if you are a beginner. Trying to do too-much-too-quick will lead to failure and frustration.

This is all great advice.

I used to wonder why Van Halen always said that he was so influenced by Clapton, because to my ear, they were doing such different things. But Clapton, during the Bluesbreaker era, showed us how to modulate keys while playing the blues. And all the greats do it, or at least many of them do. (Clapton, Angus Young, SRV, Buddy Guy, Bonamassa, Gary Moore, etc.) Cream's Crossroads and AC/DC's You Shook Me are both good examples of key modulation or playing through the changes (same thing). I doubt that many of them understand technically why it works or can explain it, but they hear that it works, feel that it works, and play it. So after you have the minor pentatonic and blues scales down and are comfortable with them, move to the mixolydian mode and/or key modulation. When you understand how the minor pentatonic, major pentatonic, and mixolydian modes all work together, you'll find that in blues it's almost impossible to play the wrong note! These are the 'blue' notes. The notes that are not in the key, but still work. And if you hit a sour note, then you can slide or bend your way out of it. Just don't stay on that sour note. This was an epiphany for me. If you'd like for me to elaborate, I can. But at this point I think it would be confusing.

in one short post you have laid out a lifetime of adventure! BRAVO!

That's all good if you wanna play lead lines all over the place; what about if you want to take your guitar to a party for a singalong?!

I know chords are just some notes in scale joined up, but I would suggest getting a few chords going earlier rather than later as playing guitar is so much more fun when you can sing along!!

I'm with Corsair.... altho I understand what our bud Colt93 is saying, I have some insight that most folks here have probably forgotten: When you're a new player, trying to learn theory and how modes work together, its enough to beat your head against a moving train!

I started playing less than 3 years ago and I still can't get my head around alot of that. That's why I recommended the Marty guy from Youtube... he makes learning some riffs and chords fun and reachable.

Here's a nice arrangement (in which he tried to combine both backing and solo) of a guy doing a Frank Zappa song - 'Sleep Dirt' which was a duet improvisation. It's quite nice imho although far from the real thing. Tabs are in the comment

... gots 'da blues 'cause he gots no cabbage to learn the blues so he can sing out his blues 'bout gottin' no coin 'ta larn him 'da blues.


Dude, you are trapped in one wicked bad circle there...

He said he wanted to play blues. So 5 chords and dominant 7 and 9 chords are all you need to play blues. I suppose you could use majors or minors instead of the 5 chords, but very few do that in blues. The bass player will walk up and down the mixolydian while the guitar player plays those dominant 7s and 9s.

But of course the possibilities are nearly limitless.